So, you know when it rains without interruption for longer than the maximum period it is legal to detain suspects under the Prevention of Terrorism Act and your children have been given two days - one vaguely plausible and one completely sodding arbitrary - off school in the same week? No? Lucky you.
Today's schedule:
7:00 Awake in a froth of anxiety, certain I am late for, well, something. Remember I am confined to the house by extreme weather conditions and under 10s. Oh! And that I don't have a job. Yeah, that. Try to go back to sleep.
7:01 Poked in the eyes from both sides, in a small boy pincer movement. Children are mysteriously requesting that we set fire to biscuits. I got into a froth of nostalgia last night telling them about long nights in '70s trattorias with my parents, when the only distraction was setting fire to amaretti papers. They have slightly got the wrong end of the stick, and are imagining the room will be filled with flaming, flying biscuits. Disappointments start early in my household and recur consistently throughout the day. Snarl and flail until children depart. Go back to sleep for half an hour, occasionally rousing myself to shout "FOR GOD'S SAKE I SAID LET THE DOG OUT I KNOW HE'S NOT STANDING BY THE DOOR ASKING TO GO OUT BUT HE'S VERY STUPID REMEMBER OH FOR GOD'S SAKE I'M COMING JESUS DO I HAVE TO DO EVERYTHING MYSELF".
7:35 Forced out of bed by plaintive whimpering (not all of it coming from me). Take dog out. Uccle has not been entirely washed away, but most of it has. The streets are deserted bar the odd pensioner. They are very hardy. An ancient lady stops to pet the bedraggled weepette. It takes her what feels like most of my remaining life to say hello to him. I could actually drown here. Repeat to myself: "I must not be rude to old ladies. I must not be rude to old ladies. I must not kick old ladies in the shins" until the danger passes. Return home as soon as weepette's digestive tract permits. This cannot be soon enough for either of us.
7:45 "Did you get the flying biscuits?"
"No. It's practically the middle of the night. Also, the actual biscuits don't fly".
"Is it time for Fimo?"
"I refer you to my earlier response".
10:00 Hours have passed and nothing has happened, bar the children eating doughnuts for breakfast. Occasionally I bleat something ineffectual about shoes, or clothes. When the children appear restless I set them the task of trying to win us a night in Ostende with their colouring skillz. Fingers frowns slightly at this picture.
"Euh, le bébé, il est bizarre, non?"
"Naaaah. He'll be fine once you've coloured him in".
Lashes makes me devise a code and write a letter in it for his friend, Swearing Boy. It takes me ages. My head hurts.
10:30 We finally leave the house to search for Fimo and other craft supplies. Fingers has a Book. The Book is filled with "fun" and "easy" craft ideas for 6-10 year olds. The memory of the fucking MONKEY I tried to knit once (suitable for children aged 7-10 years) appears like a truncated, misshapen woolly spectre in the corner of my mind.
10:55 A tram finally arrives at our windswept concrete perch. We find seats. An elderly lady (More elderly ladies. Uccle is full of them, and only the elderly are mad enough to venture out in this weather, so they can stand in my queue at the supermarket and forget their purses) smiles indulgently at my charming children. My charming children kick each other repeatedly say variants on "bottom" to each other and laugh uproariously, whilst generally behaving like monkeys on crack. Her smile evaporates.
11:30 We are returning home with craft supplies. The ING will not thank me for this. But oh, I do love craft supplies before they are turned into ninja mutant squid with giant guns, or whatever the small boys have in mind. I love the soothing promise of Fimo varnish and acrylic paint and carboard and beads. I do not think for a second about the apocalyptic carnage that craft brings when I enter Schleiper, the temple of craft promise. I am transported. So are the children, but it turns out, that is because they have been "testing" (sniffing) every marker pen in the shop. The less said about the remainder of our trip the better.
12:00 We buy amaretti on the way home from our morning of solvent abuse. The children rearrange everything in the shop ignoring my ineffectual bleating. The shopkeeper pretends to find it all perfectly charming, but his eyes are like precision lasers of DEATH.
12:30 After lunch (peanut butter sandwich, who do you think I am, Nigella Fucking Lawson?), we make Fimo. Fimo is STAINY. Why do I not remember this from all the other times?? I get a bit OCD about colour cross-contamination. There is literally noone who is less fun to do craft projects with than me. Thankfully, my children are excellent at ignoring me, they get plenty of practice. Someone - ok, probably me - puts the oven WAY too high and the Fimo billows out clouds of probably toxic smoke. It seems to work anyway. Sort of. I varnish it with demented precision, like the sad craft loser I am.
Can you guess whose is whose? 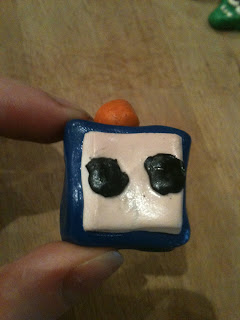 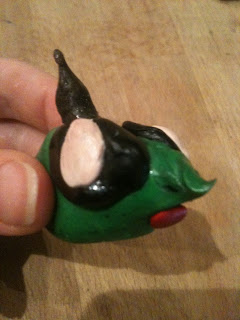 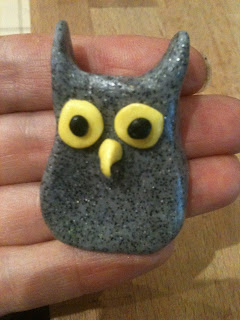 14:00 We collect Swearing Boy. Lashes proudly gives him his Code Letter. On rereading it, we realise that I have managed, not just to get it a bit wrong, but to get it so comprehensively, spectactularly wrong, that not a single letter of the whole thing is in the correct place. Alan Turing I am not. Swearing Boy is quite sweetly tolerant even if he is extremely rude. I find myself wondering about the grosse conne incident.
15:00 We make small felt monsters. I quite enjoy this bit, particularly the bit after everyone gets bored and goes away to make short films on my phone, involving screaming, showing their buttocks and tormenting the dog. Whilst they do this, I can sit, doing OCD precise tiny running stitch around the outside of the felt monsters. It is definitely the high point of my day. I show them proudly to the children, who ignore me. They are mysteriously busy hiding Twixes in the dog's bowl and enjoying Swearing Boy's attempts to broaden their vocabulary.
16:30 Just as I am getting a bit weepy at the whole playdate thing, and scraping Fimo out of the dog's fur is getting a bit old, Swearing Boy's mum sweeps him away to football practice. Seconds later, Prog Rock arrives.
16:30-20:00 Prog Rock tells me stuff about Gogol, David Mamet, Ken Clarke's voting record, Soviet satire, Auden fellating rent boys, the elastic nature of our connectedness with others and my sister's plans whilst I scrape more Fimo off the floor and make some kind of crispy brown for children, green and wholesome for adults, dinner. Lashes has broken Fingers's periscope. World War Three breaks out. I get a bit snappy, but subsequently save the day with some clever technical wizardry, which, in an act of King Solomon-esque tough justice, involves using the guilty party's toothbrush. No-one is remotely impressed. Prog Rock has brought Fingers a sort of klaxon thing as a present. He has the grace to look a bit shifty as Fingers blows it joyfully in weepette's ear. Weepette has retired to his plush car in disgust. 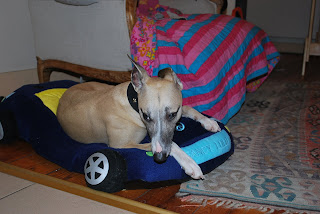 Prog Rock has stolen his chair to read Le Monde Diplomatique in.

20:30 The second best part of the day: we set fire to the amaretti papers. Apparently in 30 years this hasn't got any less magical. I am - for a brief second - a ninja parent.
21:00 Children in bed. Wine. Give Prog Rock dinner. Discuss the relatively stability of coalition governments across Europe. Write two work emails. Hope they make more sense than my attempt at code. Consider setting fire to more amaretti papers but settle for some more OCD running stitch. Ok, maybe I make a TINY bit more Fimo. I can stop any time! Honest! 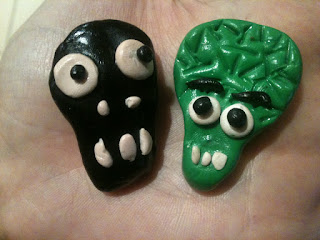 I'll put the fabric glue away now. Honest. Just give me a minute.
Posted by Waffle at 23:42

I haven't played with Fimo in years. Always was just a bit worried about that smell as it cooked...

I hope the rain lets up!

ooh!! We used to light the ameretti papers on fire, too (and I've kept a huge orange tin (full of teas I don't drink) on my kitchen counter) -- so glad that's a memory i haven't shared with my son -- I'm sure more than biscuits would be at risk!

After six years, still have residual fimo under nails from last craft fest, as well as burn marks from Mickey Mouse grilled-cheese-maker, unearthed after Playdate Boy posed all of daughter's dollhouse family in extremely compromising positions. Feeling misty and nostalgic.

If there were any justice (is there? unlike you, it's not my area of expertise), someone would send you an electric guitar disguised as an owl. Bass? Anyone?

you've given me a fond reminder of an old boss who first demonstrated the amaretti trick in front of an aghast crowd in a posh restaurant - thank you!

I had a Fimo free deprived childhood. I need some. In a fantasy world where I do crafty things with the children I see many handsome tree ornaments of Fimo. Perhaps you could do a line of owls and ghouls on Etsy? I'd buy.

Hmm, Fimo and crafts seem so.... Quaker! I guess you weren't completely traumatized?

No criticism intended--I love crafts. I had always associated Fimo with white-dreads hippies and hemp necklaces, but I like yours much more and now want to try it. Not as much as the felt animals, though: I have only barely restrained myself from going out at once to purchase more felt than I could ever possibly use.

But the amaretti papers must be a European thing and I can't really imagine what it looks like. Perhaps somewhere on YouTube there exists clarification... or will you post a video?