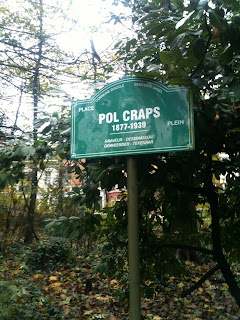 So, I had my laser focussed ass kicking yesterday. More on that anon, but basically I'm still high on the astonishing feeling of checking my HSBC balance (merely typing those four letters usually brings on a panic attack) AND opening my P60, which has sat, like a sinister throbbing presence, on the hall floor for a fortnight. Woohoo! The motivating force of shame is a powerful one, it appears. Astonishing facts:
1. I am in credit. CREDIT, I TELL YOU. Not much credit, but credit all the same.
2. My P60 did not read "fuck off you loser we aren't giving you that money we said we'd give you, ha ha sucker", as I feared.
See? It's all OK. Kind of. I would love to believe this will stop me behaving like a superstitious medieval peasant when faced with financial information, but I fear that is unlikely.
In other news, there is no other news. The flood waters of Belgiana are draining away, god knows where to, leaving a sort of muddy wasteland filled with rusting Jupiler cans. It's like being back in bloody York, the most flooding susceptible town in England (maybe. I am making that statement based on little or no knowledge). We were always being marched down to the Ouse (is that not a great name for a river? Come on!) to examine the flood defences or wave at classmates trapped on the other side of the floodwaters. I did not escape the sodden north east to end up having to discuss sandbags again, especially without the compensations of being surrounded by chocolate manufactur .. oh. I am basically living in York. Time to start bringing bags of chips into nightclubs and poking the slow moving tourists.
I have no news on my manuscript if you are wondering. Maybe it has spontaneously combusted with the shame of its own shitness. People keep asking, and I keep having to say that. It's very like the time at the very end of your pregnancy when people ask you repeatedly 'if you've had it yet', or if there's 'any news' until you think you might go into labour from sheer irritation. NO OF COURSE NOT I WOULD HAVE BLOODY WELL MENTIONED IT IF I HAD EXPELLED A HUMAN INFANT FROM MY BODY IN THE LAST TWENTY FOUR HOURS. Of course, in this case, there is a very significant risk that the whole thing will turn out to be a hysterical pregnancy, and I will have to eventually tell people, shamefaced, that there was in fact no baby, it was just trapped wind. It's just getting to the point where I wish I hadn't told anyone anything about it, ever, because really? 2010? It's a vindictive little shit of a year, and I have been tempting fate, so I'm probably due a kicking.
Aaaaanyway.
It could be worse. I could be called Pol Craps.
UPDATED: Galvanised by the aftershocks of the laser focussed ass-kicking, I tentatively emailed to ask about the fate of my hysterical pregnancy. It turned out that my initial email sending the gas baby had been lost, but has now been found. I do not know if this counts as progress or not.
Posted by Waffle at 10:33

For the first 2 pregnancies, I too got irritated to distraction by enquiries such as "are you still in one piece then?", so the last time, I just said vaguely that the baby is due around about [3 weeks later than the real due date]. Much less of those comments the 3rd time!
Not sure how that translates to fending off enquiries about manuscripts though - next time you'll think of something!

To make up for the fact that there are no KitKat makers near you here are about 30 crazed flavours of Japanese KitKat.
http://www.napajapan.com/Products.asp?brand=2&gclid=CMHu--Hq_KQCFVhc4wodOBI0hw

Ahh, credit. Bask in that lovely glow, never leave the house and all will be well. At least that's how I feel whenever (seldom) I see that little bit over and no minus sign in front.

Best of luck with your hysterical pregnancy. You're looking great...

Is it a rocket in your pocket or are you just happy to see me?

I really enjoy reading your blog, partly because they give me someone else's perspective as a Brit that has upped sticks and now calls somewhere else "home".

I have created a site which features the burblings of blogging Brits living abroad at http://transplanted.collected.info/

As part of this, I have included a link to your posts. I hope you don't mind.

If you'd prefer me to delete this link, please let me know, and I shall remove it straight away.

Best of luck with the hysterical pregnancy - hope they want to adopt it.
Mya x

I get stomach cramps when I have to look at my bank balance and I almost never open letters from the bank (let alone credit card bills - horror of horrors). It's a miracle I manage to stay afloat at all...