Everything is fine. I take comfort, as ever, in the Song of Mehitabel:
i know that i am bound
for a journey down the sound
in the midst of a refuse mound
but wotthehell wotthehell
oh i should worry and fret
death and i will coquette
there s a dance in the old dame yet
toujours gai toujours gai
Admittedly, yesterday wasn't the most intelligent day to go and collect my cardboard box of grubby coffee cups, pulp novels and plastic forks from the office, but inspired misscheduling is becoming a theme this autumn, so it was to be expected. Anyway, most of the crying was over by what, 3pm, and I didn't actually cry IN the office, which is actually quite impressive given how much I cried before and after, so I am giving myself a godalmighty pat on the back. I emailed B so that we could agree that the remainder of this week should go fuck itself, preemptively, and told him about the crying.
I ended up bent double in the park this morning, like someone had punched me in the stomach I said. Things are going brilliantly, I am at least 110% win. Right?
You are made of win he replied, comfortingly. I mean, I bet you're well dressed when park-weeping aren't you? And thus more 'despairing ingenue' than 'crazy homeless lady'. And next week when the infants are away you can buy fizzy wine from Lidl (it's actually great and €3 a bottle).
Although 'ingenue' is pushing it at 35, I did take some comfort from the fact that I was indeed wearing my beautiful MaxMara cashmere coat, bought almost exactly a year ago in a fit of wotthehell fiscal insanity and not regretted for a single, solitary second. My local Lidl is a bare five minute stumble away too. B always knows the right thing to say.
Things finally started looking up when I took Fingers to the hairdresser. 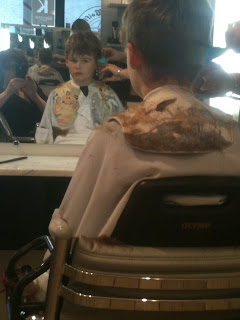 There is something irresistible about children in hairdressers, especially hairdressers that make no concessions to child friendliness, and my child is hilariously grave. I was smiling idiotically within seconds of him sitting down. He mainly tried to ignore me, conceded a small smile eventually. He's great, this one. He's funny and clever and daring, a strange mix of orderly and anarchic. He fills me with optimism. They both do. I persuaded the two of them onto a manège a bit later on, even though Lashes had to fold his knees into complex origami shapes to get into the aeroplane. I sat on a bench, wrapped in my fiscally suicidal MaxMara coat and watched them revolve in a blur of neon as the light drained from the wintry sky. 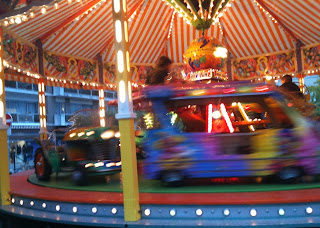 Oh I know that hairdresser feeling, wondering why the hairdresser isn't saying 'he's quite the most fantastic child whose hair I have ever cut!' Or is that just me? And like the sound of your Maxmara comfort blanket. Keep going x

Absolutely love the image of Fingers 'hilariously grave' while getting his hair cut - made me chuckle. Thank you! x

A few reasons to be cheerful (or at least walk tall in the park wrapped up in your fab coat)
- your job took place in the corridor of ennui (correct?). NOT a good place to be. You are out of that and in transition to reach a meadow of joy (or something), definitely a more soul-nourishing place, and that is truly important
- your novel is totally going to get published and lots of people will buy it - I will be first
- you have good friends who love you and are there when you need them
- you get to stare at your beautiful boys in the hairdresser's mirror and feel that butterfly love inside, and then later sniff their necks and be loved back with their unadulterated child love
- great things are ahead for you and you are strong enough to wait for them to materialise - I think you have definitely shown yourself to be strong anough for *anything*

Cuddle up in your wonderful coat, lady! I think you're wonderful, employed or not.

Props to you for not crying in the office. I failed spectacularly at that yesterday myself having my very own last day in the office (against my wishes). I managed to remain stoic for 3 months of notice and then irritatingly crumpled into a pathetic heap at the last minute. Sigh.

This crappy interlude in your life is TEMPORARY, because you are amazing in every way.

What I'd give to be able to write like you!

I think condensing all the misery into one day is brilliant. I always try to do that, instead of spreading it out over a long period. If you're miserable anyway (and I couldn't even comment on that post--it was too personal and heartbreaking and I don't actually know you), I say, get all the shit out of the way at once.

I remember being 25, while living miserably in Chicago. On my El ride home from work I would sometimes lean my head against the window and cry. On public transportation! So, a parking lot? That ain't no thing.

Jobs, and men, come and go, but Max Mara coats last for ever.

My long black Max Mara coat, made of the softest wool, a garment both stylish and yet utterly comforting, is also a souvenir of a long ago corporate life when I made a lot of money and spent it all on things to cheer me up because I hated my job so much.

Many years later, it is still beutiful, still stylish, and still being worn, so if you depreciate the cost over the years it has hardly cost me anything at all.
(I fear this argument may simply be my own version of my mother's 'LOOK how much money I've saved by spending 500 quid in the Jaeger sale, but never mind).

I have regretted many things in my existence, but NEVER the money spent at Max Mara...

I bent double in the street and howled a silent cry. The kind of grief where you no longer care that people are staring. The cause of my grief was the failure of yet another cycle of IVF. To have two beautiful children as you have would be more than I would ever dare dream to have, My point being that whenever life gets too much, please look at your boys and remember you're the luckier than some people will ever be. x
This too shall pass right? x

i hope it is a happier season now, waffle.