On beards and biscuits

M said she would let me off blogging tonight but I am the kind of craven, girlie swot who likes EXTRA homework.
A flying visit to London then, to look at this: 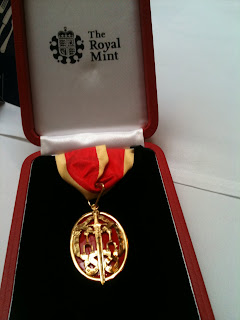 Shiny. But small! For some reason I was imagining something a little like one of those sunburst clocks from the 1970s attached to a large piece of ribbon. My slight disappointment at the medal was entirely tempered by hearing that there is an Actual Sword genuinely involved. The Queen wore turquoise, apparently. And left her handbag on the throne (is he winding me up?) to do the sword business.
So. My father is a knight of the realm, and also features prominently in this list of The Best Beards In Science: 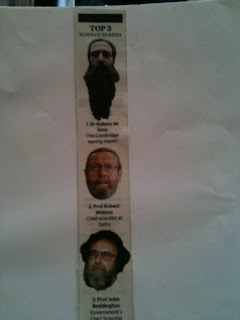 (in an unfortunate subbing error he is mislabelled. He is the one in the middle but that is not his name. Respect the beard, Times!). I am very proud. And a little envious of that beard at the top.
Apart from that I bought:
- cod liver oil capsules as M insists they are miraculous for your skin and I look like the sloughed off skin of a particularly boring species of snake at the moment;
- a cheap 'n' nasty Rimmel nail polish called 'Celebrity Bash'. Which leaves me wondering: celebrity would you most like to bash? (me: Gwynnie (though not hard, I promise, what with the osteoporosis), M: "SCARLETT LISPHANSON").
- several patent cold remedies. My colds are blending into each other like coats of paint on the Forth Bridge. Is that was this winter will be like? Oh goodie.
- A packet of Halloween crackers to assuage my parental guilt. They are rubbish, let me advise you in the strongest terms not to bother. Also, until you have tried to translate a joke involving a play on the word "spell" to two, to all intents and purposes, Belgian children, you have not known true futility.
- A packet of Jammy Dodgers, eaten in its entirety by the weepette in about two minutes flat as I came upstairs to put the children in bed. Bastard. He knew he had done wrong; I found him cowering under the babyfoot with a sort of half remorseful, half nauseous expression. Since I know EXACTLY how that feels, I let him off with a sort of half-hearted 'bad boy'. He spent the rest of the evening like this: 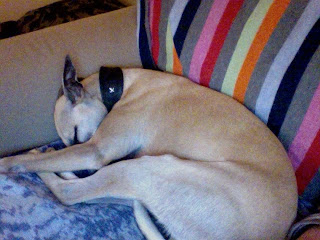 Oh the poor weepette! I think you took the right approach - I too feel sorry for him!

The medal is smaller (an prettier) than i thought too. You could almost wear that one as a pendant. Weepette does ashamed and forlorn very well!

i recommend vitamin D (for your colds, not for the weepette).

by the way, lisa-marie, in that picture, you look so much like me, it is freaking me out. you're not me, are you? and if you are, i hope you're having waaay more fun than i am.

Waffle, the first thing I thought was "I wonder if She really does the sword thing?" But your father is totally busting your chops: The Queen always struck me as the type of old lady who never lets her pocketbook out of her sight. I'm sure she just slung it in the crook of her elbow as she bopped him with the royal sword.

What's the take on beards in Britain these days? Still considered a bit Gerry Adams?

Margaret, I think you may be right. I read many years ago that the Queen always has a handbag on her arm, not because she has to carry her own handkerchief and lipstick, but because she signals to her security staff with it. If she turns it a certain way, it means she needs help.
Or maybe she just threw caution to the wind at the wonderous sight of Sir Waffle's beard!

Congratulations to your noble father!
I think you may be thinking of this; the Garter Star...
http://www.englishmonarchs.co.uk/royal_orders.html

Does he plan ever to wear it in public? I hope so, though I cannot quite decide what the perfect venue(s) for public display of knighthood might be. One option would be to insouciantly wear it everywhere, perhaps on one's overcoat to signal extra nonchalance about the whole affair. But I suppose there are probably Rules about it. Does he have a Blue Peter badge to pin next to it?

I wish my father would grow a beard so they could start the Bearded Knight's Club. It would be awesome. They would have a secret beard tug and everything.

Emma - well done to your dad, what a fabulous day for him, and you!

And secondly - cannot help but laugh at the Weepette. At least he did not walk on the dining table to get them (unlike mine a few years back... took me a while to figure out where the paw prints came from).

Yeah, but the vaguely shittier French kind. All you get is a kiss from one of Chirac's cronies and a ridiculous cloth covered paper clip to pin on your lapel.

Congratulations to Sir Waffle!
And the darling Weepette looks filled with remorse-ish.

Keira bloody Knightly. Damn her for ruining Chanel for me forever.

Congrats Papa Waffle - can't decide whether the knighthood or the beard are bigger accomplishments, but both are certainly worthy of a good Belgian beer to celebrate, as your offspring have so wisely noted!

I had a greyhound who could take a 7 pack of penguins, slice open the packet with mini needle teeth, then open each and every bar, again, down the back seam with those mini freaky teeth. A good nights work for chocolate freak greyhound. I feel for Weepette. I've been gorging on chocolate malted milks & jammy dodgers at crazy playgroup in odd 1960s community centre. The glaoumr!

Very very impressed by Sir Waffle. Does that make you a princess?

Waffle, just say the word and more illegal-in-Europe cold medicine shall be winging its way across the Atlantic.

Also, apropos of nothing, having not visited in a while, has ProgRock stopped reading?!??

Those marvellous manly beards have taken my breath away. Oh sweet hairy manliness!
Top three 'sleb dream bashees:
Gavin Rossdale for stringing poor Gwen along in that ruse of heterosexuality
Robbie Williams for the terrible dross that comes out of his albums and takes up residence in my head despite my better musical judgement
Kate Hudson because of that terrible fawning article in Elle where she was in Tuscany and we had to read about her cuteness and how she looks tawny. Fuck off, I say

congratulations by proxy to papa waffle and i do love that striped throw (cushion?) that the weepette is curled against