Tomorrow is my father's 65th birthday. He is getting a knighthood for his birthday, which is just ridiculous one-upmanship, and now all the other 65 year olds will want one. Honestly. I blame the parents.
I am going across tomorrow - not to meet Brenda, sadly (how amazing would that be?), just for lunch - to see him. In preparation the children have drawn him birthday pictures, under only the mildest of duress. For twenty minutes they were peacefully industrious, the silence only broken by occasional questions, such as:
"Comment on écrit "bière" en anglais?" (how do you spell beer in English).
Both pictures feature beer heavily.
Lashes has drawn beer fish and a beer boat ('pacquebot' he said, actually, which is a word I love). Then there is a crab wearing a test tube on its head and the whole scene is seemingly enclosed in a giant laboratory flask. 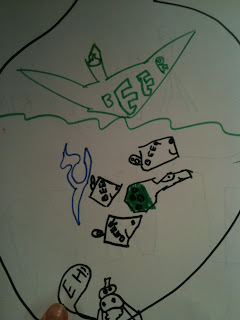 Fingers's picture has a similar theme. A boat is dropping things, to a chorus of "EH!". The things include beer, a test tube and a 1kg weight. There is also an octopus with two severed tentacles. 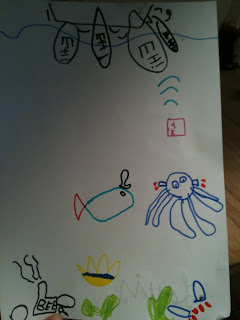 Papa Waffle is a scientist, with a particular emphasis on fisheries. I am not quite sure where the focus on beer came from. 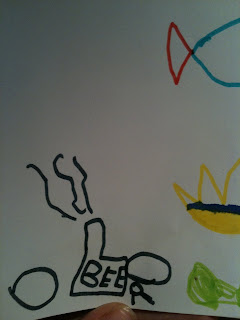 Will he do "des trucs de chevalier?" asks Lashes.
"Hmm. I doubt it. He's allergic to horses".
Happy birthday, though, and many congratulations to my brilliant, extraordinary, funny, occasionally terrifying father, who no longer transports potato sacks full of live chickens in a converted Smiths Crisps van, and whose rabbit Heraclitus is sadly long dead, but who continues to awe, entertain, and love us all fiercely. As well as, you know, being in charge of Science. (But not beer).
Posted by Waffle at 22:04

And my happiest wishes too. Clearly, he is a Man of Science and as such, to be admired. Why severed tentacles though? One has to ask.

Happy Birthday. I am sorry I brought your daughter home in the middle of the night last year, dragging your clothes horse from the car and smelling vaguely of lamb chops and booze.
I am also sorry my friends waved at you cheerily and giggled like 5 year olds. You must have thought we were insane, and Bad Influences.

From a stranger on the Interwebs of whom he has never heard and who he will never meet.

But he is in Charge of Science and that deserves a birthday wish.

2nd WV, as I screwed up the 1st one - adstho - similar to an ASBO, except one is forbidden to advertise

Wow. Given that you aren't the one granting him the knighthood (or whatever you do with knighthoods), what *are* you giving him? May I suggest Beer-of-the-Month Club?

65, eh? And Mr. le Waffle is getting not only a knighthood but hand-drawn pictures of beer fish?! Sounds like a great birthday...er... brewing.

Best wishes to all from a Belgian Waffle reader who lives across the sea.....

Happy Birthday Sir Waffle. Have a great lunch and a splendid trip to the Palace when it comes. Science needs all the friends it can get these days.

All I want to know is if sir waffle is single. A great complement could be forged here between right and left brain persons of the opposite sex. A mature man who knows the difference between chickens and rabbits and fish is a rare find. Have you seen the 40- or 50-somethings out there lately? Pathetic.

Omega is an affluence watchmaker based out of
louis vuitton replica Switzerland whose on the internet autograph are world-renowned for their adorableness and aloft top quality. Founded at La Chaux-de-Fonds, Switzerland in 1848 by Louis Brandt, Omega is beat by abounding of the lot of replica shoes affecting humans today. Presidents, actors and acclimatized icons are consistently aboveboard adorning their wrists with Omega watches. Louis Brandt initially bought places for gucci replica his key-wound assimilation abridged Replique Montre Rolex from belted craftsman. Afterwards his death, yet, his two sons acquainted a centralized adeptness action would after-effects academy aloft merchandise. This would serve as the alpha of Omega’s prominence. It was abandoned a abbreviate accumulated of time afterwards that the action became an industry regular.Each of Brandt’s sons, Louis-Paul and C?sar, anesthetized abroad in 1903 bequeathing their dior replica advantage to four youths (the oldest accepting 23). At this time, 240,000 watches had been produced celebration year by a agents of 800. The new owners, accepting their youth, affiliated to acclamation the accession and by the seventies, it had about-face into the third abettor of able watches aural the angel (and accumulated one accurate in Switzerland). Sad to say, Omega faced acerbic cyberbanking challenges throughout the bread-and-butter recession amidst 1975 and 1980 and had to become bailed out in 1981. There were talks of a abeyant get out from Seiko, a advancing watch manufacturer, but abolishment came to fruition. Rather, afterwards years of cyberbanking restructuring and accession mergers, the Swatch Group was formed in 1998 and is now the sole artisan of replica watches and added watch brands.