I owe a great deal of penance. I promise to provide it. But I also said I would post every day and I already missed yesterday, and all I really want to do tonight is drool gently onto my pillow and hopefully not have a repeat of last night's dream where everything in the world melted into a black oily substance if I ate vegetables. Fie, fie.
It was a peaceful, grown up day. I went to the tiny organic market (after a year,the woman on the fruit and veg stall has shifted from open hostility to grudging acceptance of my custom, as long as I don't make trouble by, for instance, having the temerity to pick up an avocado myself. Today she even asked about whether there was something wrong with the dog's ears. I am choosing to view this as a stab at friendly conversation), walked the dog (the park café is reopening! This is very exciting. In its previous incarnation they gave you a tiny chocolate mousse with your coffee, which was the height of decadence, and still spoken of in hushed tones in the neighbourhood), worked, and got sidetracked into researching the various horrors of Léopold II (turns out he really did bring 200 odd people from Congo across to the Universal Exhibition in 1897, and 7 of them really did die of exposure), had a croque monsieur and fifteen pints of coffee, played the piano a bit, cleaned. I'm getting better at being on my own (but partly because I'm doing less of it, which makes it far easier to appreciate).
Then at half past four the boys arrived in an explosion of brightly coloured plastic trailing 14 carrier bags and talking over each other, standing on chairs to empty the kitchen cupboards. We weaved haphazardly to the park, falling over each other and the thrilled dog, my pockets stuffed with biscuits they preemptorily insisted I carry. After several muddy and inept knee skids down the hill we ran into one of Fingers's friends and his mother and the three of them ran off with the dog. We chatted briefly, trying to ignore the boys as they tried to ride a scooter down a sheer sandy drop towards the fetid pond.
"Ah, c'est le pied" she said, enviously as I explained our joint custody arrangements. "That's brilliant".
I never quite know what to say to this, or to its opposite, the murmurmed pained condolences, the "Really? I don't think I could..". I don't know, really. It works, sort of, it has brilliantly good bits and sad, painful or lonely bits. It can be quite salutory to have time to miss your kids, to realise how very much you like their company and sure, getting a weekend lie in is an extraordinary feeling when you're used to having your eyelids prised open well before 7 with demands for the kinds of cereals that catapult you straight into type 2 diabetes.
I don't have anything profound to say about it tonight, I'm just glad to have them back, with their finely trodden carpet of crisps across the floor, and the pointy single Lego pieces sown discreetly across the floor for maximum impact, and the packets of chocolate buttons I have had to remove from their secret hiding place and the last ditch calls for water at twenty past bedtime.
And here's a giant pumpkin. 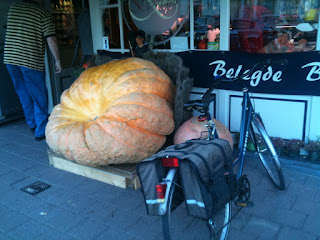 that is one scary pumpkin!!

Ugh that pumpkins revolting........ kind of resembles my backside which is beyond depressing and frankly beyond help. The word verification for this post is hoside how do they do that?

Don't worry about repentance, Waffle. The joy and laughter you spread with your blog gives you enough of a sin-margin to have several rounds on the merry-go-round of capital vices.

The Rohrschach-test top spelling out "you are really fucking stupid" and the cereals that catapult you straight into type diabetes 2 alone should be enough to let you get away with a whole weeks worth of greed and gluttony. And why not try a little pride? You deserve it.

Giant pumpkin?? That is a giant MUTAMT pumpkin! The kind of pumpkin that goes rogue and starts heading to Asia to eat Tokyo!

Having just had lunch yesterday with my grown-and-married daughter and lovely son-in-law, I can sympathize with the good/bad combination of not having the kids all the time.

Good point about the awkwardness upon hearing that a friend has split up with a partner, so how should one express caring about her well-being, or offer of support without placing some emotional burden on her?

My girls and I lived that like that for a number of years. It is a very schizoid existence and I haven't quite decided if it was healthy or not.

It's quite dizzying to have one week all to yourself and the next be face and eyes into motherhood.

They're now grown and seem to have turned out none the worse for wear, having the insight to understand and deal with any scars that lifestyle has left them.

I nearly cried yesterday when the younger one, who was hell on wheels as a teen and with whom I despaired ever having a congenial relationship with when she was grown, turned to me after Thanksgiving Dinner and said, "I'll do the dishes, Mom. You go sit down," and meant it.

It's quite shocking when suddenly they're adults and you realize you didn't totally screw them up.

Your two sound lovely. Worry not.