Whoa! Internet! I missed you! Look at you. You're looking so well! And .. different. Have you done something to your hair? Ah, it's been so long. Most importantly you're dry and fish free. I haven't looked up for 7 days and suddenly here I am, free! Well. Free apart from all the things I couldn't do during the last 80 hour week of crimes against fish and the French language. Go on, ask me a fish, any fish. No, not that one. Ask me another one. No, not that either. Ask me what hake is, ok? Ok, never mind.
I'm a bit broken by the whole fish thing and my brain is all spongy and piscine, but I have to write something because:
1. M demands it and I cannot disobey her.
2. It's been ages, and that makes me twitchy. People have been writing to ask me where I am. Honestly? I don't really know. I am not weeping in a corner, concealing some massive trauma. Nor am I out wearing sequins and snorting prohibited substances off the rumps of fat Shetland ponies. I'm, ugh, I dunno. A bit uninspired I suppose. Mildly paranoid. Busy. I will post more often this month though, possibly every day, because nothing inspires me like a pointless, self-sabotaging goal I can fail to achieve and beat myself up about.
3. It will be the only productive thing I have done all day. Yes, I consider this productive. It is wise to set the bar very low with personal goals, I find. My key performance indicators for a week with this kind of sleep debt are limited to: getting dressed, not screaming at anyone, not picking fights, or if this is not possible, trying expedite fights accidentally picked with some swift shin kicking. I have scored highly against all my KPIs today (apart from one small, nearly crying whilst buying a chicken incident) and reward myself with .. nothing, actually. The achievement is its own reward, oh yes.
So. Apologies for absence covered. Confessional soon, too. In the meantime what has been happening?
"Bob" is still here, a mournful, snorting hairball of extra responsibility. Worse, I am becoming rather attached to him, now that the ceaseless barking has slowed to a state of almost acceptable hypervigilance. He likes to be stroked, lying on his back, paws akimbo like a gay centerfold, has ridiculously short legs (an affliction for which I have considerable sympathy) and a long beard that you can hold onto for comic effect whilst singing "je te tiens, tu me tiens, par la barbichette". He is sitting as I type this, looking monstrously undignified, something about which I know a great deal myself (someone I barely know had to fasten my dress for me at a serious meeting today. It was not even at the beginning of the serious meeting, I had spent twenty minutes looking knowledgeable and serious, so I thought, while actually looking like someone who does not have the basic life skills to dress herself): 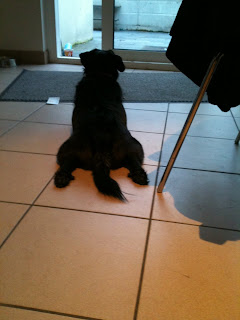 It has been 10 days. There has been no word from Bob's owner. The whole scenario is teetering on the brink of no longer being an amusing anecdote and becoming a living nightmare. Have I just acquired another dog due to my chronic inability to say no to anything? I wish I could believe I would learn something from this. I will not.
(UPDATE: Papa de Bob is back and collecting him tonight! I hope at the very least he will have brought me a severed finger to thank me)
I went to London on Thursday for Tall Tales. I was a cock, as usual, underprepared and unable to keep it together (it was about keywords. For some reason, the phrase "What are the macaroon style small round biscuits marks and spencer give with coffee and tea in its cafes?" left me incapable). Thankfully, if you divide the number of people on the bill by the entry fee, I think people were only paying about 60p for my bit. I mean, sure, an oversized Twix would be preferable, but it's not prohibitive. And I do really enjoy it: partly because the other participants are properly brilliant, and partly because it's what my friend H calls 'identity tourism'. Pretending to be someone else for a few hours. I feel a bit wistful when I leave, going away from all those funny, clever people, and back to but then I remind myself I don't live in Darfur, and kick myself in the shins.
I need a cleaner. I really, really need a cleaner. Whilst I am managing to keep more or less on top of the endlessly dreary business of cleaning a large house (at least to my own slatternly standards, ie. no visible decay, nests of insects removed from cupboards more or less weekly), it is turning me into a boring, dirt obsessed harpy, chasing the children around haranguing them for their tendency to, for instance, help themselves to, and consume crumby, stainy, snacks on the sofa, or stand, absent-mindedly shredding sheets of paper in front of the tv. I always thought myself marvellously free of bourgeois convention in not really caring about such trivialities. In fact, I was simply not confronted with the boring reality of doing all of the cleaning for a family, particularly one with two canines. Once again, life presents me with another entirely unwelcome opportunity for personal growth. There is something similar to be said about money, which I may cover in the Confessional.
My office is hidden behind an elaborate barbed wire cordon for the week due to some doubtless tedious meeting of heads of state to discuss import tariffs on 13mm width string or similar. Look: 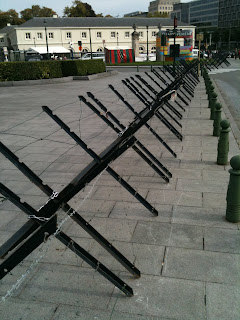 It is 66% ridiculous, 1% exciting and 33% a pain in the ass. Of course, I only remembered the cordon when I was standing in front of it like a halfwit and was forced to go back home to fetch the small square of paper that allows me to go behind the serried ranks of bored policemen, casually gesticulating about the performance of FC Brussels with their machine guns. I hope for protests from irate string importers later in the week, maybe burning some stuff. It can't be as exciting as the tractor manif, but it would be more conveniently situated. I promise to bring you StringWatch action as and when it happens.
That's all I have for you, and it's taken me the best part of a week to dredge that up. Brave new October posting regime starts here, comrades.
Posted by Waffle at 19:02

I am laughing stupidly at many things, like the barbichette, the dress zipper, and the word "spatchcock".

Whoops, a lot of funny snorts come out of my nose/mouth/whereever. Sooo good to have you back!

I consider it a highly productive day for me if I manage to get here & read your writings...
Was concerned & even a little worried when nothing appeared (& hoped that "Bob" had nothing to do with your "disappearance").
You're back! HOORAY!!!!!

I live just next to official hotel of China/Asia - EU summit, and appart from 10000 policemen and snipers on roofs (definately observing me walking around naked in my appartment), some idiot is operating 'marteau piquer'; i suspect they're digging tranchés to protect themselves. How otherwise explain such an activity at 23h32???
Happy to hear that Bob's dad is back. Spank him.

Loved Tall Tales (again). Everyone was brilliant, can't wait until the next one (will you be doing the November one?). I brought a boy with me this time as he's into comedy, we were sitting at the front, he was wearing sunglasses (had just had eye surgery) xx

Yay!! Belgian Waffle again! So glad to have something intelligent and witty to read -- it's not their fault (or is it) but so many of the bloggers I follow are getting married or having a baby - - and therefore off line for understandable reasons. Should we be glad in your case that it was fish, barbed wire, and short-legged but cuddly Bob?

Glad you have both emerged from fish hell and relocated Bob's owner.

Betty, you summed it up perfectly.

I know what a HAKE is....cuz I know that Irish poem called "Nell Flanigan's Drake"....it goes (somewhere in there)..."He could fly like an eagle and swim like a hake!!"

A hake being, of course, a herring.

You have made up for your absence with extra hilarity! Thank you for brightening my day (I mean it). Also, I just had to google "definition spatchcock", so never say your blog isn't educational.

Glad you are footloose and fish-free! Or at least fish-free. And perhaps Bob-free too, now.

This line: "Once again, life presents me with another entirely unwelcome opportunity for personal growth"--should be my motto. Is it too large for an escutcheon? (And--I just had to google my OWN big word to make sure I was remembering it right--did you know that escutcheon means "(in medicine) the distribution of pubic hair"? Thank god for Wikipedia.)

The weight of bourgeois convention is impressive when you are the one who does the cleaning. If it doesn't get dirty, I don't have to clean it, right?

Dreading the installation of a screen this morning. Have set my sights quite low, but putting screws into window trim while living for all intents and purposes underwater, it just goes against every microscopic fiber of my being.

Was perking up at the idea of killing this lackluster keeper of Bob, but now he's returned from an absence no doubt spent learning what raising kids, keeping a house, and hell, having your own damned dog are like. So that's good.

You should obey M., shouldn't you? Do you recall taking an oath saying you would?