Veteran readers (to whom my apologies for many, many things) may remember a confession, from the days of the Confessional, involving my complicity in the disposal of a small number of live tropical fish - the Pontypines - in a not entirely humane way. I think my current predicament is karmic retribution for that dark day. I am embroiled in a terrifyingly lengthy translation exercise on a fish related topic. INTO French. Every time I fumble my way through a paragraph of Fmsy (that's something to do with yield, fish fans), and stochastic stock projection, it seems that seven hundred more take its place, like a hideous DG Maritime Affairs and Fisheries sponsored hydra. I spent the whole day on it yesterday and I am still only at the bottom of page 4 (of 60). By mid-afternoon I was hallucinating hake. By six I had started on the sloe gin. How are you supposed to drink sloe gin? I was going for "neat, in full tumblers, fast". Penury is a difficult business, forcing you into unspeakable acts.
So. The rest of my natural life will be consumed with halting, bureaucratic piscine French. Serves me right. I am also translating to the melodious accompaniment of my house guest "Bob". 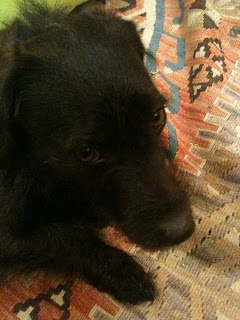 I say "Bob" because that might not be his real name. "Bob" is a classified dog. His owner (my neighbour) is not merely evasive, but positively secretive, both about where he is going, and when, if ever, he will return. That information is disseminated on a need to know basis, and I do not. "Bob" is similarly shrouded in secrecy. I think I might have been duped into providing a safe house for him. "For all we know" mused M "that dog is a terrorist". He is certainly very loud and spent much of the night barking at insurgents. Or possibly dust. "Bob"'s owner disappeared into the night after dropping him off last night, asking me, intensely as he stood on the threshold:
"Emma, I am going to ask you a question and I want you to think about your answer. What would you do JUST AFTER you had killed a man?"
(he's in IT, I believe)
This keeps distracting me from the fish. What would I do? Flap about ineffectually, I expect. Maybe try and do something with kitchen roll? Kitchen roll usually helps. I sort of hope that if the situation arises whilst "Bob" is in my custody, he will know what to do. He seems a relatively greedy little chap, so maybe he could dispose of the body. The whole things sounds .. exhausting though. I don't think I missed my vocation in not becoming an assassin.
I must return to the fish. If anything happens to me .. well. I have no idea. But there are five spare kitchen rolls in the basement should you need them.
Posted by Waffle at 10:15

I think maybe cling film is important too. Not quite sure. Lx

Bob looks quite sweet - for a murderer's doggie. Maybe he pines for the taste of human flesh? Maybe he's a disposal unit for the murdered person's remains. I'm reading a particularly gory thriller at the moment in case you couldn't tell.

You are indeed being visited by the Fish Karma Police - you can either tough it out or go onto the e-lance website and offer someone a pittance to translate it for you ;-)

oo how furtive !, How are Bob and the weepette getting along? Perhaps we should start a discussion as to how to dispose of a body :-)

I have to agree with Alison, Bob doesn't look like a murderers dog, although I havn't a clue what a murderers dog "should" look like, in my head, it is more like Bullseye from Oliver, although, even Bullseye was found to be good in the end.

you made me smile on what is otherwise a trying day. Thanks for that...you may be tied up with fish; I am buried deep under essays that I don't want to mark. Most are terrible and I despair.

it's not the owner, it's the dog that's the killer. Look at those eyes!!

God, I don't know what made me shudder more: the hellish translation (I so sympathise, E, that is my day job! Though thankfully I don't specialise in fishy matters) or the story of your mysterious house guest and his even more shady owner...

Hope the Weepette will be able to bring out the best in Bob... Are they getting on?

Good luck with the work. I seriously feel sick to the stomach at the thought of 60 pages of fish text to trawl through... You are one brave woman.

WV (in keeping with the sea creatures theme): oussin, a very cute, very soft urchin from an as yet undiscovered sea.

And what would you do?

I would check my powder. Murder can be sweaty work.

Sorry about the fish hell. I have a colleague who did fish law in Defra - lets say it wasnt his favourite post.
Another blog I read pointed me this way http://vimeo.com/15049808 . Between you and that I believe I am now ready for all things Belgian.

Somehow, I don't think the first thing I would do is drop off my dog to a neighbor, and give vague hints as to my recent doings...

Bob has such a face. But those eyes have obviously seen things that no dog should have to. Murder, for instance.

Does he sleep in your room? Does the Weepette cower in his presence?

My word verification is 'bewhale'.

Fava beans and a nice Chianti?

You call your best friend, and tell her to bring big black bin bags.

That's what best friends are for.

And what do I do, Margaret and Caroline if she's bloody MOVED TO SINGAPORE. Hmmmm?

Em, Ali, Anon, I quite agree. That dog has Seen Things. Possibly Done Things too. Currently he is using aural torture to try and get me to let him sleep on my bed, but i have it on good authority he snores, and I know he sheds like a mofo. I am not sure how much longer I can hold out.

He does look suspiciously innocent. I reckon anyone with a wet nose has to be morally dubious.