They're back. The salt mines have finally reopened. I have taken the official Gulag portrait: 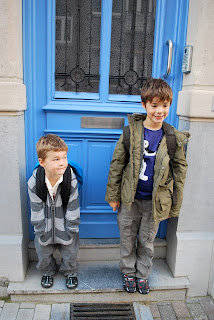 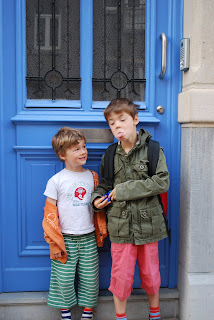 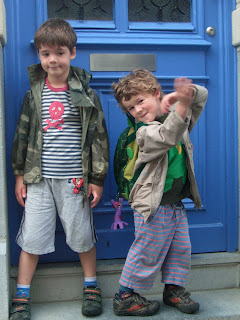 I'm quite surprised by how little they have changed, actually. They look slightly sombre on the official portrait, but I can assure you it was business as usual. 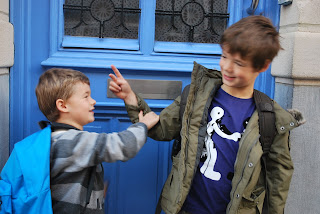 They were probably just tired, because we got up at six to go and see the hedgehog. The hedgehog was not cooperative, but in recognition of our efforts, the CFO donned his motorcycle gloves to wake it up for us. It was totally worth the early start. 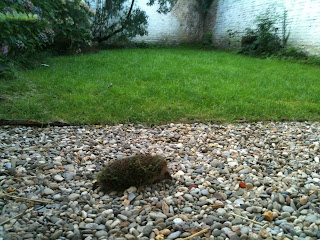 It looked how I feel, getting up at 6am. Dishevelled, disorientated, and on a fast track back to bed.

In some arcane Gulag ceremony, Fingers was required to line up in the hall and walk, to parental applause from the maternelle (gulag lite, soup at 11am, pickaxes provided) to the primaire (full metal gulag, 18 hour day with a half hour lunchbreak mucking out on the collective farm, but you can choose your own 11am snack). This is the end of his carefree infancy in the company of Mario and Luigi, we will be doing handwriting practice until our pencils are soaked in blood. His brother came home this lunchtime (YES. The first day of school lasted a magnificent THREE WHOLE HOURS) having been to his first Dutch lesson. He pulled a French face of indifference.

"C'est exactement comme l'anglais". Pout. Shrug. I am looking forward to us learning an exciting new language together, hem hem. 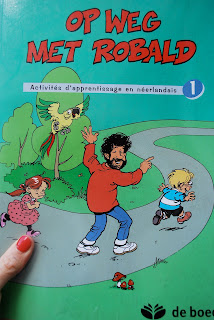 I would discourage my child in the strongest terms from going anywhere with Robald. I mean, look at him. At best, he's going to make you play non-competitive games featuring co-operating tribes in a forest somewhere. At worst .. well. I bet he has a geetar and knows several chords for 'Little Boxes'. The whole thing is, in the words of Molesworth, unspeakably sordid*.

(*He is describing the French textbook. "There is another character called papa rat. He is always eating cheese. He loves cheese. Mama rat loves cheese too. They hav ten little rats who love cheese. In fact, the whole business is unspeakably sordid")

I must go and wrestle with the self-adhesive book covering torture that is my life for the next few days. It is day one. I have covered 7 books with all the skill of an epileptic dog and a light smattering of anglo-saxon vocabulary. I apparently owe the school TWO HUNDRED AND TWENTY EUROS for a coach trip to stare at some dust and a month's worth of chicon braisé and boulettes. It's going to be a long, long year.
Posted by Waffle at 15:19

I'm confused: Are you covering their books in stick-on plastic? Does it come off? We used to have to cover our schoolbooks in brown paper grocery bags. Because I am slightly OCD, this was my favorite part of the start of school.

I was crap at covering books. I thought they were perfect and then they wouldn't open/close properly due to my crapness at paper measuring. (Same happens now when I wrap presents. Still can't measure paper correctly.)

I am surprised at how little the boys seem to have actually grown in a year, when you look at the door? But they're looking very handsome indeed.

You are the only person I know* who quotes Molesworth.

We used to cover our school books in wallpaper.

The kids who used woodchip were social outcasts.

I recall the heady delights of covering my French jotters in David Essex posters from the centre pages of my Jackie.

Them were the days. Self-adhesive vinyl? That's a bit Blue Peter!

PS - I must have missed the post about the hedge pig, I shall now go back and find it. Your CEO sounds like a lovely man, y'know.

Margaret - You stick it on. It does not come off. It sort of blisters in a way distressing to anyone even slightly OCD. You'd hate it, or be really good at it. Not sure which.

I don't remember covering books, Jo. I was probably a lazy ungrateful wretch and Prog Rock did it.

Really Jonathan? Mrs Trefusis and I frequently resort to Molesworth. Molesworth and PG Wodehouse. It's one of the many reasons why I love her.

Dragondays - Well, obv. Of course he is. You can TELL.

Robald? There is clearly no accounting for the Dutch.

jesus, that robald looks seriously disturbing/disturbed. if i had a child i would protest that they are attempting to make obvious child molesters seem like nice folk. who does that? gack!

p.s. my early onset alzheimer's is rearing its ugly head. this is the fourth comment this week i have had to erase and re-post, this time with appropriate punctuation and spelling.

p.p.s. hedgehog is seriously cute. can i have it?

Ali X: Weirdly, it was de rigueur in my elementary school to use grocery bags. Kids who tried fancying things up were judged harshly.

Emma: I think I would probably be very good at it. But I require a large, dust-free table, an X-Acto knife, a self-healing cutting mat, a very slightly damp microfiber cloth, a dry microfiber cloth, canned air and something to use as a squeegee.

"I bet he has a geetar and knows several chords for 'Little Boxes'". muhahahaha!

hem. sorry, actually I am afaid, very afaid of Robald.

your boys are super-cute! love the Boden!

You know, the upside to the Belgian schools vs the European schools is that at least you have the booklist (this will not feel like a good thing, but it is). Once the Euro school have gone back next week (Stalag Luft as I think of it..) you spend forever getting one list a day, trawling Carrefore, Club, Colruyt, anywhere to try and get things that the world and his wife bought last week and so are out of stock...everywhere. Expressions like, there must be more to life than this, spring to mind...Take heart...it could be worse...

I STILL have to cover some books with adhesive wrap. They STILL blister and are bumpy and generally look like crap. However it's still obviously preferable to doing it herself.
Your boys look gorgeous x

Look how those boys have grown!

The mind boggles at that book cover. Who could possibly think that looks appealing? Not even Robold's mother.

Oh I LOVE covering books! And I am really really good at it. Isn't this why people have kids?

Yuk stick on plastic.
I learned French with a book featuring Pierre and Paulette, two goody two shoes childeren who were always nice and always helped pappi and mammi. (This was in Africa). The example did not do much good, I can swear like a sailor in French.

My mother used to make me cover my own books. I got my hair stuck to my journal de classe in 3rd year. Traumatic

And my Dutch textbooks featured a short man in a plastic mac called Piet and a talking cat called Punky.

Ahahhahaaa Alice. Piet and Punky. AND hair in your journal de classe. Laughing like a fool.

Parental applause! What the hell is happening to the francophone world? Parents weren't even allowed inside my daughter's maternelle, let alone allowed to say or do anything that might bolster the infants' self-esteem while they were still being broken in. Bloody globalisation.