Continued blog radio silence, sorry. Mainly I have been skittering along in the trenches of parenting this week, one forgotten gym kit, pustule draining appointment, pool of dog sick at a time. We schlep backwards and forwards from school in a shambolic procession, the dog weaving its lead around our legs, Lashes bashing into elderly ladies and me wearing unforgiving spike heels and carrying both the cartables of muscular-skeletal degeneration. School bags must weigh in excess of a metric tonne otherwise they just fail you automatically, I think. The whole schoolbag thing is a plot by European physiotherapists and orthopaedic surgeons to generate work. I do not own scales in order to do the traditional French tv exercise of weighing the school bags, but I can assure you that each one is fully two weepettes.
The sticky backed plastic film is all finished but there are still new and inexplicable challenges and many of them, distressingly, are maths related. We are labouring under the yoke of the attractively named "Drill 3" at the moment. 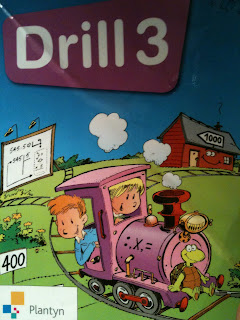 I imagine the title refers to some esoteric corporal punishment inflicted on you for having misshapen 6s. I can't imagine why they look so cheery in their train. Maybe they have escaped Robald's clutches. The station is smiling. Unspeakably sordid, I tell you.

"Why" I ask Lashes for the nine thousandth time "Do we have to use a mouth shape to do relatively simple additions? What is the mouth shape FOR? I don't understand" 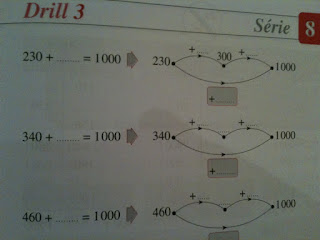 He just shrugs, dismissively and makes strange hieroglyphic notations on the page in inky, spidery blotches. He does not care, much. I am unable to establish whether they are right or wrong. My rôle seems to be to assist his self-esteem by demonstrating that he is far better at Drill 3 than I am. This I can manage. Just when I think I am grasping the complexities of the single mouth - it appears to be a method for making adding any two numbers take vastly longer than you could imagine - Drill 3 goes all fancy and hits us up with a TRIPLE MOUTH: 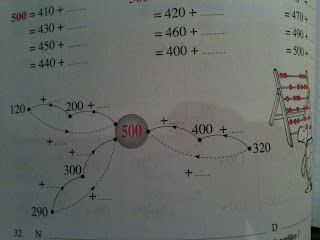 The tortoise does well to stand by its abacus. Troisième primaire is shaping up to be a rollercoaster of parental incompetence. I find myself thinking wistfully of the Steiner school in York where you could spend a whole academic year making one candle. I also find myself thinking wistfully of gin.
This illustration on page 15 of Drill 3 pretty much says it all, I feel. 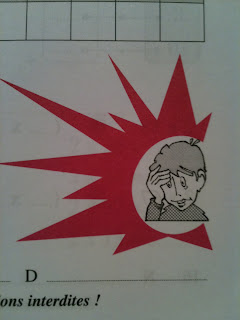 As we grapple with the Mouths of Impenetrability, Fingers sits peacefully in the corner, obsessively copying out lines of zeros and ones, like he has just invented binary. When he is particularly pleased with one of his efforts he sits back and surveys it, Bic 4 couleurs, etiquetté au nom de l'enfant poised above the paper.
"Celui-là, il est bien" he says, without false modesty, pointing at a particularly sinuously curved 2. "J'aime bien les 2".
It would be fair to say he is finding primary school everything he dreamed and more. His pencil case is immaculate, he does not forget where he has left his coat and I have rarely seen him vibrate with such contentment at the utter rightness of everything. At bedtime he requests a pencil and insists on writing his name several times in spidery, old lady handwriting, mouth open, tongue protruding ever so slightly, before he can sleep, curled in a neat ball.
Lashes may find the whole business more, well, frustrating, but at least he and I have been having frat boy style fun with his dilating eye drops. Before anyone gets exercised about that, I promise it was strictly above board and required by both the handwriting gorgon and the opthamologist. If we were going to do something risky and irresponsible, I would at least choose something with FIRE. Or steal a penguin.
We did enjoy it though.
"Wooooaaaah tes pupilles! Go and look in the mirror!"
"Non, take a picture!" 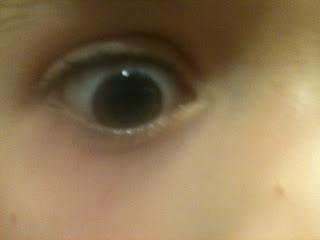 I showed this picture to my friend H, who said "He looks like he spent 1972 up a tree in Windsor Great Park". Indeed.
I have left you too long without news of Robald. He is on holiday, from where this idyllic picture of a Belgian seaside holiday comes. 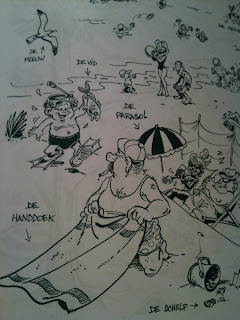 I mainly liked this picture for the aspirational man demonstrating the correct use of a handdoek, met sigaret, but learning that a seagull is a Meeuw is an added bonus. Meow indeed.
Posted by Waffle at 22:21

This is so instructional. I never knew Belgian seaside holidays could be so enjoyable, even down to the fag ash. Not that like in Rothesay.

I cannot work out how they do that maths, I can do it in my head, but fuck only knows what they are teaching your children !!

Surely the caption 'de haddoeck' should refer to the fish the boy has in his hand?

I'm so relieved that we didn't have to see a shirtless Robald at the beach!

The maths mouths are giving me a headache and I don't even have to try and complete them.

Measuring the school bags using weepette's is far more enterprising than using scales. I hope you're well. I have no idea what some of those maths exercises are either xx

Oh dear god what is he hiding underneath de haddoeck?

I can solve the riddle of your math mouths. The idea is that the first space is to add the quantity needed to bring the sum to the next hundred, etc., and then to add the remainder once it's a nice round number like 200.

It's baffling to look at, but it makes sense to teach them to do it that way, since I know that's how I add things in my head.

I hope it helps, and I hope I'm actually right. I sure wasn't taught to use math mouths when I was his age.

I LOVE that Robald is smoking. Belgium is funny.

Just found my way here via tip from Swedish aquaintance who also lives in Brussels, struggling with pretty much the same oevres as you.

PS. Now you won't believe me, but word verification is 'phinger'.

As a Swede living in Brussels, I found the third grammatical example in my 8 year old daughter's French book immensely fascinating. "Je vais chercher une bouteille de vin dans la cave". If you made your 8 year old go and fetch you a bottle of wine in Sweden, they'd put the kid in fostercare.

Em, all this school talk has obviously struck a chord in my unconscious; I had a dream last night in which you and I sat next to each other in a classroom (note that I don't know you, so "you" were as I know you through your blog posts and Facegoop) and we got thrown out because we kept chattering and the teacher could not get a word in. We did not care and promptly went shopping.

And you see, the only way I could cope with the mysterious ways in which we got taught at school (no maths mouths, though) was to chat to my classmates. So "bavarde" (chatterbox) always featured prominently on my school reports.

Sorry, Em was meant to be E.

They should start teaching math with a retelling of Descartes' revelation in the heated room, but no, they use mouth shapes. Then the mouth shapes start to rotate, as if they enjoyed inflicting absurdities on mere children. They're well aware of the fact that children, being what they are, will not question it.

Yes, the seagulls stay at the Moewenpick, and clearly they forgot the caption 'cultureel stereotiep' under the guy with the 'hand towel'

oh that is SO funny - esp the line about spending 1972 up a tree in Windsor Great Park! Brightened up my day considerably :-)

The vagaries of teaching maths is beyond me. Sonshine doesn't even subtract the same way as I learned and my attempts to 'Do It My Way' are met with wildly staring eyes, fingers in the ears and mutinous mutterings about me 'being old'

Lovely post that I thoroughly enjoyed! Thanks for the early laugh :)

The math mouths hurt my brain.

They taught us math in lines.

(adds "math mouths" as another item to the pro-con list concerning the possibility of raising children in Belgium.)

I'm with anonymous on the maths mouths. Well on the way to learning subtraction, rather than addition, I reckon....