After London, Paris, for the tiniest, but most lovely of escapes.
Cake
Paris, for me, is a list of unmissable cake shops - Stohrer (thanks to M), Hermé, Dalloyau, Ladurée, a place on rue Vielle du Temple that makes large green and pink biscuits shaped like mice. Loads of cake shops. When I lived there, and we had no money, cake was my lipstick, the tiny indulgence I used to allow myself to make up for the austerity in all other areas. The heat, and my own indolence, restricted the number of cakes I could buy on this visit, so I went for the ones that have stayed in my mind since New Year, when M and I unapologetically and systematically devoured a whole box of his petits fours. Sadahuru Aoki. Do you get that thing where you taste something, something you don't have ready access to, and then OBSESS about it, and when and how you can possibly get it again? I do, frequently, and I suspect I'm not alone. There used to be a particular coffee cake in a Jewish bakery on Avenue de Wagram near our flat in Paris. They only made it once a week, if that, but I would walk past daily just in case. I walked a lot when we lived there, which was a very good thing, or I would have been horrifyingly fat what with my single-minded pursuit of patisserie.
The Sadaharu Aoki counter at Lafayette Gourmet is a triumph of lunacy, with its incomprehensible double queueing system presided over by sweetly polite and self-effacing Japanese girls who are no match for Paris gourmands, drunk on patisserie possibility and rendered furious by low blood sugar and crowds. However. I did finally manage to get a Bambou (green tea and chocolate) cake, a bag of financiers, and a bar of his extraordinary salted caramel chocolate. I only had to tread on three sets of toes and get shrieky once. I cannot vouch for the state of the financiers and the chocolate after dropping my suitcase down an escalator, nearly killing someone behind me, but the Bambou was fantastic.
Here's a tiny and inadequate picture of a row of Bambous:

I ate mine on a terrasse at Opéra with long-suffering K, who accompanied me on my mad cake odyssey.
"Aren't you going to eat your cake?" she asked, after we had chatted desultorily for a few minutes.
"I've already eaten it".
"Whaaaat?! But I'm sitting right next to you and I didn't even see your lips move. There's not a trace of it!"
"Ninja skills, my friend, ninja skills". I eat very fast. Very, very, disgustingly fast.
"That's because when you were young, the packs of wild dogs that roamed Yorkshire would snatch the food from your plate if you took your time, isn't it Emma?" said B, sympathetically, after I performed the same revolting trick with a Croque Monsieur later.
Non-cake loveliness
- Lots of wandering round the Marais today, skulking in the shade (it was 30° and bright sunshine. By about half past ten I was a mass of prickly heat) with frequent refreshment stops. B was trying to shop, and I was trying not to. You can probably guess how that ended - I bought a dress, he only bought a pair of pants. We were both horrified by this outcome, though I do like the dress. It was very cheap, 70% reduced AND it is not black. It sort of looks grey on this picture but I promise you, hand on heart, it is blue. 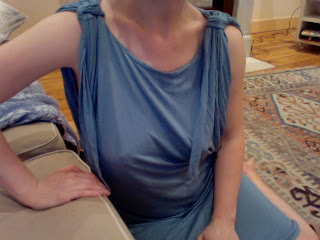 Other things wrong with this photo, in which I attempt to replace a mirror with PhotoBooth: I have no head. This is not a deliberate attempt at anonymity. I think it's a little late for that. I seem to only have one breast. My hand is the wrong way round. I think I was trying to make my arm look thin. Instead I look like a double jointed, grey, shrouded, decapitated maniac. If this was the best one, I leave you to speculate about the others. Scary. It is nicer than it looks, the dress, I promise, though the eagle eyed may also note in this hi-tech photograph that it is missing SIDES. Maybe that is why it was so cheap.
I got distracted in the pants shop by this garment. Can anyone shed any light? 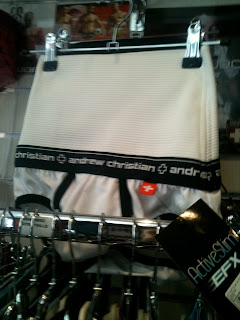 Are they control top pants, like Spanx for men? Or is it supposed to be very hawt and sexy? If the latter, it is yet again demonstrated how infinitely varied human sexuality is. Oh, I have just spotted that the label says "Active Slim", so perhaps it is the first option. Pants enlightenment, please.

- Great cocktails at Prescription in St Germain, particularly something with gin, and mint, and ginger. Completely delicious and deadly. One is enough. Repeat after me, Emma. One is enough. (Stable door. Horse. Bolted. Gin sweats on the morning metro).
- Reading this from start to finish on the train, unable to put it down. Funny, black, well written and completely compelling. There's a bit about Mick Hucknall that made me snort like a pig.
My very favourite bit of all was a late night zoom across Paris by scooter, in the heat, weaving through the Saturday night crowds and ZOOMING across the Seine. Vroom vroom, brilliant. I couldn't stop laughing. We used to have a scooter in London, it was a source of total joy, and the CFO has, almost always had, a motorbike. I have spent lots of time on two wheeled machines of death, and I totally love them. Well, I love them in the city. Less when you are on a 100km trip to a festival in the arse end of nowhere with only a shampoo bottle filled with gin to console you. In the city, the less appropriately dressed you are as a passenger, the more fun it is. I was very inappropriately dressed last night (I am not talking about helmets. OF COURSE everyone must always wear a helmet), which just added to the hilarity. When my children are a little older, I will of course change my tune entirely, and no-one will be allowed on two wheeled machines of death, still less without a full suit of body armour. In fact, I will probably hate them on principle. But last night was total bliss. Ssssh. We'll never tell, and I'll delete this when they hit 16.
I don't often say that, do I? Let us take a second. I had a LOVELY weekend.
How was yours?
Posted by Waffle at 23:10

I had the most perfect weekend in Cambridge with lovely people including a 6 hour punting trip and swimming in the Cam - clearly we were in tune!!

Started badly with a child's ballet lesson then 3 kids and husband in Brent X for 2 hours. Much better when got home and lounged under the wisteria. Lovely picnic today and pleased with Spanish win as the Dutch played horribly.

What is it about the Japanese and fancy French patisserie?

went on a four day camping trip, first time in over two years. turns out, i still like camping. did a whale watching sailing trip: we saw sea lions, porpoises, several orca pods and humpback whales, froze our asses off and were served amazing muffins for breakfast, and hot-from-the-oven scones with cream and jam for tea. kayaked without dying (i always worry) or without encountering any hungry cetaceans. walked, wondered, sat by the fire, slept like a baby (always a huge bonus for me - perhaps i ought to give up my normal life and live in a tent on a beach), and drank too much wine. it was good.

(i think i meant wandered, not wondered, but i'm certain i did some wondering as well)

Sounds almost like a lovely dream :) But I'll believe it's real entirely because Sadahuru Aoki is so terribly magnificent and pretty much exactly, to-a-tee as you've described.

You in blue! Wow! You MUST have been possessed by happiness.

Weekend: pretty Idyllic for me too, including time at a festival, amazing heat that won't let up (in BELGIUM!?!) getting things done about the house with ease, as though they were nothing more than heat-induced hallucinations, and a good half-day lying in on a blanket in the sun with the perfect breeze and fluffiest of clouds as company.

It was fine, if fucking hot and muggy, until this morning when I can't get the Spanx breed of cat out of my head. Or perhaps an undergarment that attempts to recreate a naturally occurring mutation of the spine (but allows the wearer to take down larger prey even when young).

After being forced to tolerate a quiet, empty street Sunday night, all peace broke out a little after 11. Followed by sleeping. Brilliant.

Full of cake, peacock feathers and small, sticky children. Not as nice as your cakes though.

I loved that book. In fact I wrote a fulsome blog post in praise of it only the other week. It was fantastic. Everyone should be made to read it. I howled.

The man and I seem to have finally figured out how to have a restful, productive and enjoyable weekend without wigging out, doing everything at breakneck speed and collapsing in tears of exhaustion and regret on Sunday night. So it was really good, thanks.

The dress is lovely. I am partial to that shade of blue. I didn't even notice there are no sides.

I'm intrigued! I want to know whose motorbike you were riding on.
And just reading about French pastry gives me a Pavlovian response.

You know, Waffle, this is not the first time you have posted a photo in which you appeared to have only one boob. I am growing suspicious.

Your weekend sounds lovely. Mine was spent in blissful solitude floating around the pool. Nice.

Iheart - Ha, I'm not being deliberately coy. A nice gent.

Katyboo - I met her last week and she was so SO lovely and funny and kind. I have a massive girl crush.

Frau Antje - the spanx cat would be quite something. Let's see if M can make one.

I loved reading about your weekend and the depictions of the Japanese counter girls. I get what you mean about the cravings, though I think it's hormonal (thankfully, I have less of that now). I can't do all the cakes and pastries due to working on losing weight, etc., but YOU enjoy and I'll just live vicariously :-D. Oh, and love how you said that cake was your lipstick. Great line!