Chien Chaud and other stories 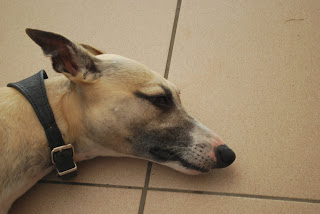 I have nothing to report. I can't report because I am in the bath. I have been in the bath all day apart from the bits where I was hiding in the freezer section of the supermarket and sharing a bag of ice cubes with the dog. I think it's safe to say neither of us is at our perkiest in the heat. It is 35°C in Belgiana and I think the Atomium is melting, globules of steel dripping down onto the decaying structures of Mini-Europe to the awe of the few, ill-advised visitors.
Let me say, however, that I am absolutely NOT complaining. It is beautiful, amazing weather. The junior Waffles are away in yet another seaside campsite (don't, I can't even think about it without shuddering) with their paternal grandparents, the King and Queen of Sudokuland. The CFOs tortoises are in heaven, lumbering around his garden with surprising speed and stupidity. And most importantly, until Monday when I will be absolutely compelled to get on a tram again, I can just lurk in here with the shutters down and my miserable, panting, bony companion lying at my feet, like so: 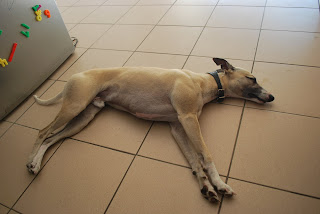 (this is not a creature that the evolutionary process should have spared, given that he is incapable of dealing with even moderate spikes or dips in temperature without collapsing in a heap of despair and ill-health, but at least he looks aesthetically pleasing in his despair, which is more than can be said for me).
If I find myself getting faintly crabby at the heat rash, or the absence of all ice creams but Magnums from the shops (who likes Magnums? Anyone? They're just rubbish, aren't they? The ratio of chocolate to ice cream is all wrong, unlike an old school choc ice, with that delicately flaking shell of, well, probably pure petrochemicals, but it tasted GOOD. Oh, I could go off on a whole reverie here about the ice creams of my childhood, and how a trip to the village shop for ice cream in the long, painful confinement in rural torture zones that comprised my summer holidays was the one bright spark in days filled with poking dead creatures and being taken for hikes, but I will spare you), I only have to remember the heatwave of 2003.
In 2003 we were living in a top floor flat, under the eaves, in Newman Street, W1, London. It was in every way the most wonderful, amazing place to live, and of all the places I have lived, the one for which I retain the fiercest affection, but high summer, baking under the flat, black metal roof, was a living hell. In the summer of 2003 (the one where all those pensioners died in Paris, remember?) I had a boiling, angry one year old and I was newly pregnant, it was the dream scenario. I don't remember much about it, except wanting to cry, but being too hot to, and one day so brutal that we had to decamp to Papa Waffle's house which was slightly cooler (I think I allowed myself to cry a little that day). The rest of that summer was spent in Coram Fields, a playground in Bloomsbury with a sort of shallow, fetid paddling pool and some of the scabbiest livestock known to man. I have rarely seen a crosser sheep than the two in Coram Fields that summer, and as mentioned above, my every childhood holiday was ALL about the pissed off sheep. I went back there with Antonia a couple of years ago and it had been moderately tarted up, but I was reassured to see there were still two furious sheep giving us evils from the back of a very dark stall. We had a penis loop to attract goats, so we didn't mind too much.
Perspective, distance, are odd. I look back at lots of things that happened in the last fifteen years or so, and wonder how, exactly, I got through them. Not just the big things, like deaths and funerals and repeatedly moving house and illness and splitting up, but the tiny ones too. Heatwaves, sleep deprivation, vomiting bugs, bringing a sofa back from Ikea by myself. I haven't had anything unbearable to deal with, but somehow things can look quite hard, unmanageable even, when you look back at them. I hope that means that people are, I am, resilient, rather than that I used to be a hardass, and now I'm a massive wimp. I try and tell myself that it's the former, anyway. I see lots of resilience around me, in particular from my amazing brother and his family, dealing with the biggest of big, shitty things on a daily basis with love and humour and grit. If ever I need reminding how pathetically tiny my problems are, I know where to look.
So. This year I'm a bit lost and a bit lonely, but this too shall pass and it's what I wanted so I can damn well have the good grace to make the absolute best of it. And yeah. Right now, it's hot. Nice, isn't it?
Posted by Waffle at 20:25

Waffle, your floor looks so clean! Congrats on using the foul-smelling floor cleaner. 'Tis true that the heat is a misery, especially with the humidity. You could always de-camp for the cinema. Don't forget your gold ingot, though. The concession treats are more dear than black market kidneys!

C/Kalgon! One of my only sallies out today was to get NICE SMELLING FLOORSTUFF. It is a revelation. "Recommended by Febreze" (yes, this IS what my life has come to).

Cinema tomorrow I think, if I get an acceptable number of words written.

It will pass, it will.... in the meantime, there is the sun. I woke up this morning in Blackpool (I was there for work) which is a great big jolly cartoon of a place (in the nicest possible way, truly!) and it was so nice to see people enjoying the sun and the beach. I sat and watched the tide come in for 20mins and remembered how amazing I've always found that and how deeply reassuring. Take care and get lots of ice Bxx

How I long for hot weather! Here in Vancouver, we have had the coolest, rainiest spring EVER - and the summer so far is not much better. I think our highest temp so far since May has been 18 degrees. Blah! Oh well - I'm off to Egypt next week. That should do the trick for me.

Waffle - I think your dog is Scottish. I've got that wonky thermostat thing going on. Or perhaps I'm really a whippet.

I was just thinking the other day how I am so bloody useless at parties and yet, when I was 12, at Guide Camp (Lossiemouth) I stood on the stage every night and did (without a script) a whole Frank Spencer routine.

My stomach fairly churns at the memory - but at 12, I was quite fearless.

I often wonder what happened.

Remember Funny Feet - Walls made them? They were 'ice cream' shaped feet? Cresta? That turned your lips blue. Cremola Foam? I only have to smell that and I'm transported back to my granny's kitchen in the summer hols.

soak up the heat, it'll be pissing down soon enough :-)

I thought that with virtually no hair and no body fat, whippets would breeze through the heat.. How wrong I was. Clearly I have much to be grateful for in my body hair and fat.

Well, at some point late in the day I stood up and one of my sticky arms sloughed off, but I'm not complaining.

Saw a whippet with similar collar, rolling around on its back in the grass, at Glasgow's Kelvingrove park -- thought of Oscar. We're very glad to have escaped 95degrees F heat at home (US) but not sure an transatlantic flight is what you need to do to stay cool!
(In terms of climate and body temp -- not in terms of attitude (you've got that covered!).)

I wonder about that all the time. Different things gobsmack me now, is about all I can come up with. It's selective wimpiness--along with selective memory. That and sheer stubbornness will get you through most things, I hope.

Then again, back when the hard things were actually HAPPENING, I didn't have quite the luxury of fretting the way I do now...

And then there's the kicker--you chose this life, so you'd better not fail at it. ("You" meaning "me", not necessarily "you".) I think that accounts for 97% of the angst, for me.