Why I hate Carpet Rite

I have spent a lot of time in bed this week, which has given me ample time to contemplate my bedroom.
My bedroom is the nicest room in the house. The rest of the house is messy, lacking in storage space and currently has extremely dirty floors, since I am neither hoover nor mop fit, not to mention massively lacking hoover or mop inclination. It looks like shit, basically. Jose the neighbourhood totalitarian said as much when he came round yesterday, which is nice of him.
My bedroom does not look like shit. It is very light, airy and comforting and nicely furnished in pale, neutral colours. There is less intrusive salmon paintwork than in other rooms and I have put virtually all my nice art in there. It is peaceful. It is how I would like all of my life to be, whilst knowing that is impossible.
Look, here is part of my bedroom: 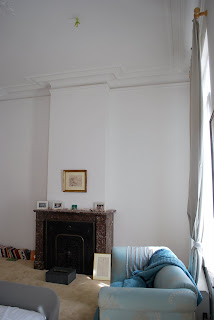 Ancient, delicate sofa covered in Neisha Crosland anemone fabric, intricate old brass fire guard, two beautiful Dufy sketches, one pencil, one ink, a Lubna Chowdhary tile that I love, my mad but wonderful box of fire, and, hang on, what's that?
Up there? On the ceiling? What the FUCK?
Yeah. Meet the Ceiling Thing. 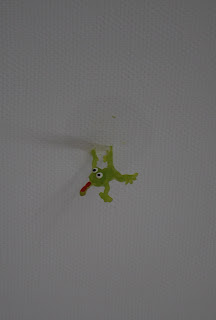 With his attendant greasy circle.
Do you know how long I have been sharing my sanctuary with Ceiling Thing? I actually went and checked this for you in my Big File of Invoices and I can tell you with absolute accuracy that I have been sharing my sanctuary with Ceiling Thing since THE FIFTH OF DECEMBER. The little rubbery bastard has been hanging on SIX MONTHS now. Not bad for a free cover mount from a crappy children's magazine, eh? For the first few months his whole body was splattered flat against the ceiling. Since then, glacially slowly, he has been slipping downwards. Firstly he was hanging from all four limbs, then three, and in the last week or so, a tantalising two. The children document his progress gleefully for me as we lie in bed on weekend mornings and I wish for room service breakfast. Look! He's barely hanging by his fingertips now! Surely it can't be long now? Every time I look at him he knocks a week off my life, so here's hoping. The ceilings in my house are so high that even Iris, the rickety ladder of certain death, cannot reach that far. It says "Iris" on one of her rungs. I am not the kind of woman who names her ladder.
The worst of it is that Ceiling Thing was not even the work of my children. No. The reason I can place his arrival with such accuracy is that he was hilariously thrown up there by the carpet fitters, obviously with some force given how long he's been up there. WOW. YOU GUYS ARE SO FUCKING FUNNY. Knobs. I didn't even WANT a fucking carpet, but it was that or the original beige lino. It was astonishingly expensive too. I was reminded of that looking up my Big File of Receipts. Jesus! The things I could have done with that money (got a cleaner?)!
Anyway. I have spent much of the week staring at the jaunty expression of Ceiling Thing And The Attending Greasy Circle. I note, now that I look at the photograph, that he is sticking his lewd, rubbery tongue out at me. I suspect if I were Alain de Botton I would find some kind of profoundly true metaphor for the human condition and our doomed striving for perfection. I am not Alain de Botton. All he inspires in me is a visceral hatred of Carpet Rite. This is probably why I am not the author of a series of tomes of popular, slightly whimsical philosophy, but an embittered crone. So be it.
Posted by Waffle at 12:00

Labels: I am not Alain de Botton, My house looks like shit

I think you should find something similarly objectionable and indulge yourself by going round and hurling it at Carpet Rite.... bastards!

I have similar entertainment looking at the daddy-long-legs spiders and their drooping swags of dusty web from my bed. I however do not have the excuse of an inaccessibly high ceiling, nor indeed any tradesmen's high-jinks to blame. When the webs with their entangled carcases of moths & crane flies threaten to actually fall on my head in the night, I will be forced into action!

At least when you are bored you have something to look at. Beats peeling paint or cobwebs. Plus he is kind of cute and look at all that weekend morning bonding time with the boys! Actually I think when he falls you will miss him. I am expecting a blog post on the day it happens.

I do not believe that you are not the kind of person that names their ladder.

He adds a certain edge to your delicately coloured room.

I have a smear on the bedroom ceiling where a massive spider was lurking. I don't mind them on verticals, but on horizontals above the bed, night-time droppage is too terrifying to think of.

I swiped him with a rolled up magazine by jumping on the bed to get the necessary height.

That stain will stay there until I can be fagged to redecorate over the top of it.

You have my sympathies ;-)

When the Ceiling Thing has a greasy circle around it, it means it's going to rain.

O fuck. I feel really, really bad. I must confess that I have been responsible for Ceiling Thing Covermounts of Various Children's Magazines Past. Bad birdy.

In fact, I once fielded a phone call from an irate mother whose kid had chucked a similarly crap sticky thing on her freshly painted ceiling.

Can I offer my apologies on behalf of all crap children's magazine editors? What's my penance?

the fifth of december is my birthday. consider it my birthday gift from the gods to you. you're welcome.

Well, in the U.S. you would totally call them up and yell at them and vaguely threaten lawyers [well I guess you ARE one so that works out well, even if your specialty is not really in the house-damages realm] and they would grovel and give you some money for having your ceiling painted. Because, really, they did kind of fuck it up with the greasy circle, and, having a very high ceiling myself, I can tell you that it costs unspeakable amounts to have someone come in and paint one.

But, this is the U.S., with the lawsuits and the national obsession with customer service, so, I am suspecting this might not convert over well to your situation.

Apologies for the missing apostrophe in the final line of previous comment. :-(

in our old house we had a stain on the celling from where my husband's cyst on his arm burst. Nice.

I thank the Lord every day that you are not that pretentious wanker Alain de Botton.

like i say, you folks in Belgium have such INTERESTING lives...even your ceilings are interesting.

Your post really cheered me up! ahah ceiling thing..is the grease circle getting bigger as ceiling thing is descending though?

What you don't know is that those cheeky chappies installed a camera in Ceiling Thing...

At least you have something to stare at as you pass your nights. Ceiling thing is cool.

if he succumbs to gravity - i guarantee you'll feel sad. there was a bird living in my chimney for weeks and i hated that shrill, bone itchingly, annoying ball of feathers. i didn't sleep a week straight once because of it.
but then one day it just stopped incessantly squawking and it never came back - and bizarrely enough, i was sad.
i think that was life lesson right there. however shite stuff gets, there's always something you'll miss because that's the nature of time.
not quite de botton - but that bird taught me, that anything - literally ANYTHING can make me feel occupied and not so incredibly alone in the world.

this was making me laugh until I read the bit about it having a camera in it....now I'm spooked. He's gotta go.