It's Belgian election time, an event so frequent and confusing it barely merits mention, except that this time it looks like rumours of the demise of Belgium are barely exaggerated at all. Is it finally broken? What, exactly, is holding it together apart from a shared love of endive and the difficulty of cutting the Manneken Pis in half? Search me.
The King wears a look of barely suppressed irritation as he is once more summoned back from one of his many summer residences to deal with the ongoing disintegration of his country. Instead of lounging poolside in St Trop, or taking Fabiola for an ice cream on the front at Knokke, he has to listen to the interminable squabblings of a gang of potato faced men, each with names more nonsensical than the last. I mean, the chances are that in September, the country (assuming it still exists in some form) will be governed by either "Bart de Wever" or "Elio di Rupo", both of whom sound like characters on a semi-educational tv show for the under 5s. Other bit players include Alexander de Croo, Paul Magnette and Antoinette Spaak. Come ON.
A little more on our two potential leaders. Bart de Wever is easy for British readers, because look! He's actually Nick Griffin. 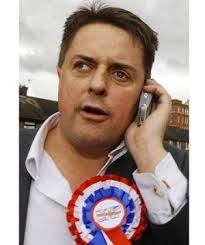 Perhaps he got lost leaving the European Parliament one day and a hilarious comedy of errors culminated in him leading a prominent Flemish separatist party? That would make a good sitcom.
(For some reason any time I try to find a photograph of a political figure, all I can locate are tiny thumbnails. If it's a conspiracy, obviously I'm all in favour. Mainly they don't bear too close examination)
Interesting facts about Bart: one of his middle names is Liliane. He is very susceptible to food poisoning. He is obsessed with Bavaria.
Politically, Bart is what is technically known as "nutjob Flem" who wants the poor bits of Belgium full of toothless unemployed steel workers to fuck off and leave Flanders all shiny and blonde and independent, full of unfeasibly tall, muscular people with excellent teeth and stable incomes. Bart got 28% of the vote which scares me witless.
Elio is odd. I mean, look: 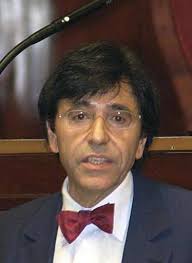 He ALWAYS wears a bow tie. It's his thing. He also founded the "Festival International du Film d'Amour" and is a freemason (thank you Wikipedia). He's a socialist (they did very well in the francophone south). He's openly gay. He has his own blog which features pictures of him lifting weights in skimpy shorts and patrolling the streets accompanied by a large papier mâché crocodile. He's francophone.
Can you see already how BRILLIANTLY these two are going to get on?
Pleasingly, noone seems to have any belief that they will manage to form a government before September at the earliest. Remember how twitchy Britain got in the few days before the posh boys teamed up? Ha. Belgium laughs, jadedly, in the face of your panic, Britain. Belgium can go whole years without a government.
Tragically I threw away most of the mountain of election literature from potatoes in suits with uneasily jovial expressions. I only have this festival of awkwardness, which I love: 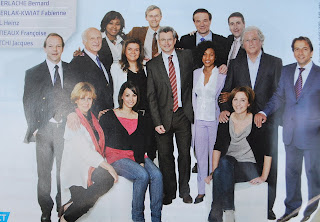 Photographer: Come on, loosen up! I know, how about you all HOLD ON to each other? It'll look like you're a big old gang of friends! It'll be brilliant! Ok, you, baldie on the left, no touching from you. It just looks .. brrr; just don't. Ok? Just, I dunno, keep those hands where we can't see them.
Vote MR for inappropriate and awkward touching.
There's something particularly sinister about the grouping to the right, with the two gents each with a heavy hand on the woman's shoulder. They look like they are in the process of apprehending her for thought crimes.
I liked this too both because of the (Dutch) slogan (Hell, yes. Constantly) and also for the woman's facial expression, which again, got me wondering about what kind of direction she was getting from the photographer. 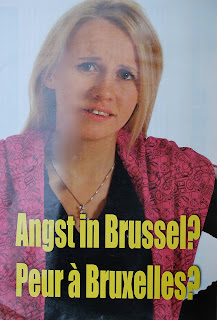 Photographer: Ok, Anneliese, I need you to look anxious. Um, no, not quite like that. Could you, I dunno, make it look a bit more like, hmmm, the village idiot puzzling over quadratic equations? But also sort of cross at the same time? PERFECT! Right I'm going to drape this jumper from 1986 over your shoulders, just hold it right there... That's it! Good girl. I think we have our shot.
Vote Vlaams Belang for prominent teeth, distressed blondeness, and retro fashion choices.
I am totally on top of this whole politics business.
Posted by Waffle at 11:45

No, cancel that. Come to Britain and explain British politics. I have a ready supply of new potatoes, a bit of broccoli and a very tiny courgette. They are at your disposal.

Funny! Where were you during all the other elections that took place in the world this year? Can you hit Canada sometime soon? Perhaps hire yourself out as a photo commentator. Isn't that what you always wanted to do?

You should send this the quality press and apply for a job as a political commentator. I think you are a little unfair to Bart - he looks quite sweet, not an adjective I would use for Griffin who looks unhinged (does he actually have a wonky eye or are all photos of him doctored to make him look barking?).

Perhaps the King should just close Belgium, give the french speaking bit to France, the flemish speaking bit to Holland and then retire to the South of France to enjoy ice creams with Queen Fabiola

Those pictures of Elio in his shorts? *shudder*
Although picture yourself 'His Flemish Fatness' Bart De Wever in shorts and doing weights. *tripple shudder*

as an american living in belgium, i'm completely boggled by the multiple parties here and generally block it all out. however, you've inspired me to learn more, since i can't resist politicians in inappropriate clothing. but, i can't find the pictures of our fabulous leader in shorts! help, please?

oh, la, la! i found the shorts! sweet moses. i love this country.

Emma - I think you should stand quite frankly.

At least the Belgian public would be properly entertained (provided they adopted a sense of humour) and on a global scale you would get recognition from, err, Obama - when he is done with bashing the Brits - and, uhmm, Berlusconi (provided you got your tits out first).


Sounds like a plan. Do you need a campaign manager?

have you heard of HG and Rampaging Roy Slaven. You'd 'get on!' as we say.

Sadly Elio in shorts seems to be unavailable to me until I get home. Unfortunately Cameron all too often seen in shorts running about with squaddies to prove how manly he is.

London City Mum - I only WISH President Obama would bash the brits - well, not all of them, just Tony Hayward - in the nose. Repeatedly. Until he screams like a little girl. And then a few extra times for good measure.

The grey-haired gent on the left in the mass-photo looks slightly like John McCain. Did we deport him?

And I didn't get round to it in the previous post, but I want to go to Mini Europe. I think it is adorable! I want one in my back yard!

the best piece of political analysis I've read in a long time and (sshh, tell no one) I spend my whole life immersed in it...

How have I only just discovered your blog!? I now feel I know everything there is to know about Belgian politics. Pure genius, thank you, you've made my day.

I have always been hesitant to go into politics, even though there is so much nonsense happening in the political arena - now I know why:

thank you. you have significantly cheered an afternoon's sick leave. sick leave is crap when you're actually sick. but learnign that i must spend some more time on elio's website may be priceless.

On another matter, did you see this? Spawn of Dr. Capybara!
http://www.zooborns.com/zooborns/2010/06/capy-trio-rocks-chessington-zoo.html
What's not to love?

Part of me wants to move to Belgium just to vote for Elio. The rest wants to run, fast.

Meanwhile and slightly north, one is reminded of a Rosselini (sp?, have cold and cannot look it up, not Isabella) character's assertion, "How can such a noisy place be so boring." If it's quiet down there I would gladly relinquish election squalor here and re-immigrate, but can't get myself to throw the literature away as it seems it will make nice puppet heads on popsicle sticks.

Oh Elio. My Belgian husband seems to think that NVA and the PS may not be a bad combo since the PS rules Wallonia and the French community...mind you not great for the country as a whole...

What happened to 'How to meet lovely girls'?? A post mysteriously airbrushed a la Stalin???