Yeah, so. Still struggling. M says it's because it's summer and "nothing important happens in summer". I'm adopting that theory. I wrote a whiny paragraph about how I couldn't get anything written, then deleted it, because it annoyed me which leaves us with, what? Nothing, really. What are my fallbacks?
1. Baby animals
2. The weather
3. Children
4. Whining
5. Poking fun at Belgium
5. Er, that's it.
I think I've covered everything. I know there have been several requests to hear about the housewarming, but sadly for writing purposes, the housewarming was Just FINE. Everyone was lovely. I overdressed, in the manner of an excitable small child. My brilliant friend T acted like a highly specialised party tornado, organising everything that I was too lame to deal with, directing the movement of furniture and the chilling of drinks and warning me off my initial plan to buy nothing but €150 of Cava (she was of course right). The adoptive son put up with my Mariah Carey style demand that he dismantle and move the table football down two flights of stairs with very good grace. This features in the only picture of the party I managed to take: 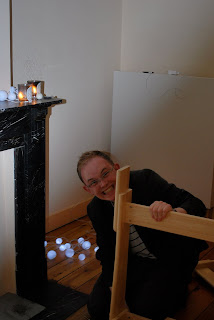 Jessica made the most amazing salted caramels. I tried to hide them in the kitchen put someone found them and I was forced to share. The sun shone, sort of, in a not very warm way and the Von Trapp family even sent round one of their children in a kind, if passive-aggressive way, to mow my lawn. I was not persuaded to play the piano, despite hours of emotional blackmail, including the immortal line: "I wanted to play the piano but I couldn't. The IRA blew up all the pianos in Ulster". We inadvertently invented the fruit beer slush puppy. Only one person ended up sleeping in a train station that night. I declare it a success, though definitely thanks to T rather than to me.
Other observations:
1. If you mix "Blanc nucléaire" stain remover and Ace bleach in the hope of removing a coffee stain from your white jacket, it creates some kind of sulphur based toxic reaction. Your jacket will be ruined and smell of burning. Your washing machine may also be ruined, if you choose to investigate (I advise just shutting it and moving as far away as possible). Your house will smell like a stink bomb. Just don't. I was seduced by the name "Blanc Nucléaire", which was exactly what I was hoping to achieve, but sadly my cavalier attitude towards reading the instructions for use has come back to bite me, mushroom cloud styley.
2. Some cleaning product in my house is still mysteriously dyeing my nails green. My house is full of cleaning products due to my ongoing battle with the smell of drains (I have poured a lot of buckets of water down drains and under-used pipes following the useful advice provided on these pages. I would say it's helping, but it hasn't completely fixed it), so it's hard to identify the culprit. One moment I will have normal hands, the next, green. It's unnerving. I'd stop cleaning altogether, but I would quite like to live somewhere presentable, eventually. It's a long term goal, but one I continue to work towards. I have finally stopped being surprised at the regularity with which floors need hoovering and washing, tiresome though it is. This is the first time since I was about, ooh, 22, I haven't had a cleaner (yes, spoiled brat). It's a whole voyage of discovery. The hoover and I are making huge progress in our relationship. I have found a way of opening it without using a teaspoon. Give me ten years or so and I might be capable of a reasonable level of domestic hygiene.
3. Live Congolese rap is ace (Baloji is also a Vuitton model and extremely fetching. That did not detract at all from the general loveliness of seeing him). I'm always startled when I hear the expression "tout ceci nous rendra pas le Congo" (none of this will give us the Congo back), which turns up in one of his songs and which seems the acme of non-PC Belgitude, when you think of Belgium's dark and horrible colonial history, and which I have seen explained as follows:
Expression ironique utilisée pour se lamenter du triste état de la Belgique ou des affaires du monde, ou de la météo, des crottes de chien sur les trottoirs ou du programme du parti socialiste
Ironic expression used to bemoan the pitiful state of Belgium or world affairs, or the weather, dog turds on pavements, or the Socialist party manifesto.
I mean, would we say something equivalent in English? I can't imagine it. Can anyone think of something along similar lines?
Posted by Waffle at 22:04

The only thing I van think of is 'No one expected the Spanish Armada' which is from Monty Python.

Vinegar should take the green off your nails. It mings though, so your choice!

Canadian living in Patagonia here. I'm finally de-lurking after about a year of following your blog. I laugh and admire along with all the other readers, but oddly, it's the lingering drain odour issue that has finally brought me out of my trogloditine ways. I've had a similar problem here, and I know how to solve it. Do you have a bidet? A bidet will emit nasty odour from the overflow drain if it doesn't has a gas trap (like its regular drain does). Fortunately, my problem bidet has an overflow drain about the size of a bottle's opening, so I popped a cork in it and voila, no more odour. Usually this happens to the lowest bidet in your system, although once it is corked a bidet on a higher floor may start smelling too. Again, a cork. On the plus side, you'll need to empty a wine bottle or two to make this work. Ultimately, this may or may not be the source of your drain odour, and the only way to really know is to get your face into hideously close proximity with your bidet's basin and sniff.

I'm with M on nothing important happening in summer. Summer makes me all passive-aggressive. Lucky I'm going into winter which only makes me tetchy.

Is it Summer already, I thought it was still Spring? Jeez, must pay more attention.

I am very much with you on the whole cleaning love/hate thing, I really would like it to be clean and tidy. I just can't be fagged to do anything about it until it's totally grim.

Just worried you might pour good wine down your bidet drain. Please don't, it would be a terrible waste. The Police sang about Sue Lawley, that's quite random.

I am quite enamored with the idea of a fruit beer slush puppy.

Cannot think of a similar line, but will definitely use ironic expressions to describe excrutiatingly close dillweed who has probably already passed traits of thinking being an asshole is amusing and basic yelling on to his spawn genetically. Irony never made anything worse, did it? I'm all for things not being as they seem. And now that the endless and horrid, horrid holidays are over, am off to assist with palliative care, nothing important happening would be good.

My mum says that if you feel like painting/partying/reading you should. There will always be housework, but not always the opportunity to paint/party/read/eat make up (delete as appropriate).

It's the only thing that my mother has told me that I've taken to heart.

What's happening with your government? your Von Trapp neighbours? your cake decorating skills? your purse?

can't think of anything like that in English either - but it's a fascinating take on Belgium.... take care Bx