Happiness is a lifesized terracotta penguin

Goodness, I've been gone for ages. I do not have much to offer in mitigation. Busy housewarming weekend, and prolonged periods of gloom, with added minor disasters. I will not enumerate them here, mainly because I am pretending several of them didn't happen. No, nothing important and horrifyingly expensive was left on a bench in the outskirts of Bruges. There have been no breakages, temper tantrums, irrational sobbing outburts. No, I most certainly didn't put a pair of knickers in my handbag in my frenetic pre-party tidying and forget to remove them for several days, taking them out whilst looking for a ticket on my busy commuter tram. Definitely not that.
What can I tell you? Well, I can show you some pretty pictures at least.
On Sunday, touring Brussels with my houseguests we saw the following:
A sheep made of hair: 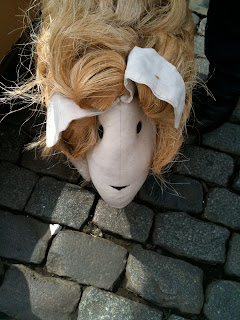 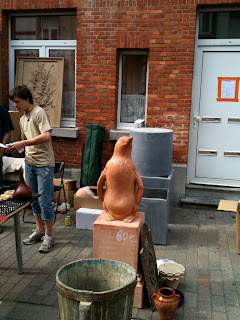 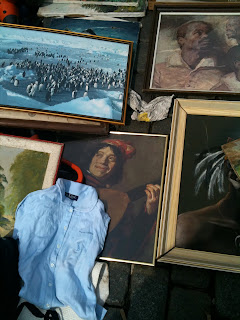 Chairs made of stags: 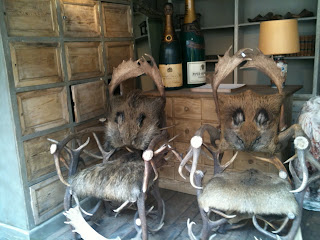 A beautiful lady from the 80s: 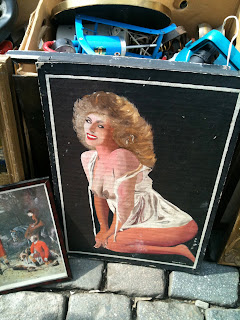 And finest of all, this poster looking for a fox terrier stolen by a drunken woman: 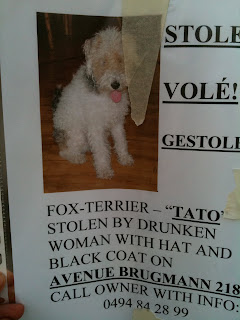 I am still pondering this. What became of Tato the dog (I like to think it's pronounced Tayto, like the Irish crisps) and his ravisseuse? How does a drunken woman steal a dog, and how much is she probably regretting it now? I write, with feeling, as one who had to remove several layers of fetid pond scum from the weepette at half past seven this morning after it tried to catch a ball unwisely close to the edge of the local duck pond, and careered in there with a dull splosh, and a look of panic. I can quite imagine getting carried away with the some charming ball of fluff you see on the street and finding it both inspired and hilarious to kidnap it, only to wake up the next morning hungover and miserable with the stolen ball of fluff smelly, yapping, freaking out and peeing everywhere.
This is why Mrs Trefusis and I speculated that perhaps I should find Tato's bereft owners and say "I have found your dog! Look! Here he is. Totally unscathed except, er, his legs are a bit longer and his coat is smoother. Fox terriers often respond to stress in that way. Oh, and his memory has gone a bit funny, now he will only answer to Oscar. But here he is! Are you delighted? Is there a reward?'. (it's ok Beatrice, I promise not to give the dog away)
I have to go and make biscuits, but in case anyone hasn't seen them already, these baby sloths:

(Meet the sloths from Amphibian Avenger on Vimeo)

are liable to become a dangerous obsession. M and I have been comparing notes on which one is most like our respective sisters - mine is the one upside down staring at a plate of greenery as if profoundly stoned at 36 secs, hers is the one on the right under the towel stealing the bean at 43 secs. See if you can spot a family member.
Posted by Waffle at 08:29

It seems you have had an interesting week E.

I can't believe you didn't buy the terracotta penguin. Almost everything else in your tour of Belgiana gives me the heebies-jeebies.

I hope the weepette is ok!

good to hear from you - went to a palace in Portugal once full of furniture made from dead animals... love the drunken woman/dog story - you must explore! we need closure!

I can't help imagining Tato being stolen by the weird smelly drunk old lady transvestite who hangs around Place Stephanie sometimes, shouting 'fuck off' at passers-by. She always carries a suitcase which would seem to be the ideal place to stow a cute dog.

Oh, Laura, I know EXACTLY who you mean. My greatest fear is that I am turning into her.

I think turning into her is everyone's greatest fear. I like to imagine her married to the one legged croaking guy outside Carrefour.

My sister is fascinated with him. She's like 'I thought you had GOOD healthcare in this country! Why can't he have a false leg?'. I told her he probably left it at home. She's very innocent.

What a relief - I thought it was only me the mad women and one-legged man harrassed.

No Bath Bun, you're very much not alone. The one legged man chases me - I've never given him any money and I think that to do so now would be a sign of weakness on my part. I'm sure he must recognise me. I've considered moving to another part of Brussels just to get away from him.

Did you get the chairs made of stags for your new place? Great for unwanted house guests ;-)

Thanks for the reassurance Laura. I never give him any money and I walk past him every day on the way home. I have the impression he see's me coming and starts ranting.

oooh tell us about your house-warming! Did bloggers turn up at your door?

I love that penguin. I covet said penguin.

I think I saw my brother in that sloth video - he would be the one frantically pawing at his ass trying to pull something out of it.

Have I mentioned lately that I really should have been an only child?

I love the baby sloths! I'm the one absentmindedly eating the green bean.
I hope the medieval Mick Jagger is now hanging in the salmon palace.
It's small comfort to know that I've never drunkenly kidnapped any pet.

I WANT a stag chair!!!! Can't you get one for me and pop it in the post? It is the most tasteless thing I have seen since the taxidermists in Osnabrück who displayed a sort of mythical beast made out of left-over bits in a display cabinet at the railway station.

I have often compared my offspring to sloths but seeing these babies makes me realise that real sloths would have been a lot cuddlier and easier to deal with.

Obviously this is now a Style Blog and you will start calling us *darling*.

You do know, don't you, that you are my main (only) point of reference for Belgium. And strange baby animals. Thank you.

i love the baby sloths

What a great title and then you only go and have photos that deliver! Really enjoyed this post.

Those sloths are full of SQUEEEE!!!

Those deer chairs are tragically gruesome. How can anyone sit comfortably? It's bad enough to have a severed stags head peering at you - nevermind placing your posterior on one!

Don't we get any blow-by-blow party pix? Who got off with whom? I think we should be told...