The European Commission, my imaginary friends

Enough moping. There's a brief break in the hail and we should be celebrating. The thermostat is hovering around a balmy, er, 6°, it must be summer! Crack out the merino 100 denier tights and the nourishing broth and let's party under a shower of volcanic ash confetti. I had to stop crying anyway, I seem to have exploded one of my eyes in the process. It's all bloodshot and sore, and it scares small children on the tram. This is the upside.
Today I am, among other things, wondering which member of the College of EU Commissioners is most attractive. Go and look for yourself and come back and tell me. For me it has to be Algirdas Semeta with his commandingly slick hair, strangely accented surname and iron fisted rule over taxation and anti-fraud. 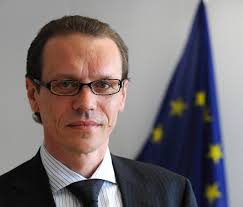 He has a way with words too:
“... we must make an efficient European venture capital market a reality, and this means eliminating any tax obstacles that still stand in its way," - says Commissioner Algirdas Šemeta.
I am all a-quiver. But I have also found that if you look at him for long enough, and at a particular angle, and if you are desperate enough, Jose Manuel Barroso can look quite alluring. Yes, I have been in the capital of European administration far too long. I have variously found myself thinking that Antonio Tijani would probably take you out for a very jolly lunch and Laszlo Andor would definitely be good at mending a puncture on your bike. Stefan Fule has to work hard to overcome his unfortunate surname, but I bet he's fun at the Christmas party. I can find redeeming qualities for most of them with the exception of Gunther Oettinger: 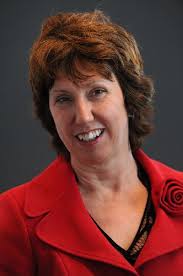 who looks exactly like one of my more loathed piano teachers.
Most of all, I find myself staring wistfully at Siim Kallas and wishing they would give him a sabbatical from fighting the volcano to come and run Belgium for a while. 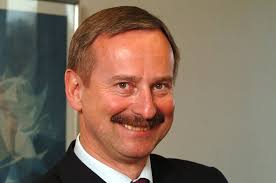 He is Estonian and has a great deal of medals from various European states for obscure reasons. He has a brilliant name and an even more brilliant moustache. That moustache would whip the 92 tram into shape. And! The final touch - he was president of the Estonian Cyclists Union for not one but TWO five year stints. Put that in your saddlebag and smoke it Boris Johnson, you lumbering oaf (sorry M).
Maybe I could loan him out to the UK too. He looks an accommodating kind of chap, and would probably put an end to all the hung parliament hysteria by kindly and efficiently placing all the party leaders in a large jute sack and drowning them in the Thames.
Posted by Waffle at 22:37

Siim Kallas probably wouldn't be bad-looking either, if he'd lose that mustache (I understand this could completely destroy his appeal for you).

Semeta, goodness gracious. He looks so disciplinary. Though the thought was unbidden I am forced to conclude that he must thoroughly enjoy some form of power play in bed.

All together your College will give the keyboard quite a workout ... especially Maroš
Šefčovič (had to copy and paste that one).

Johannes Hahn is a bit of s silver fox I think. He looks like a scientist, though he clearly isn't.

Maroš Šefčovič is the man for me. He has been to about 12 universities but no cycling achievements listed unfortunately.

I am deeply impressed by Androulla Vassiliou's use of Elnett hairspray but horrified that Cecilia Malmström is younger than me - I have clearly wasted my life.

Antonio Tijani has more than a touch of Father Ted Crilly (or possibly Radovan Karadzic) about him....

I get the Maros Sevcovic thing, Betty. Except he looks like someone has stood on his head.

Andris Piebalgs gets my vote, by dint of his exceptionally silly name.

I rather like the look of Johannes Hahn, myself. Semeta looks, ummm, strict - a soul-mate of your secretly-admired Stalin, perhaps?

Joaquín Almunia for me. It's the skeptical expression, and being from Bilbao (mmm, the food). He's on the grandfatherly side, but sadly not actually too old. I only hope he has topics of conversation besides "competition".

Oh. Well, um, what about your School Crush? Couldn't he grow a mmustache and lead waffleland with a firm and steady hand?

Semeta? He's Lithuanian - a country which usually produces much better-looking people than him. You can try my favorite Lithuanian phrase on him "Senas bet dar gyvas" which means "Old but still alive." or "Snookas pleetya proushchu" - a face begging for a brick. Sorry, I have now exhausted my Lithuanian.

I'll bet that Johannes Hahn is a bit of a player. He has a mischevious look about him. But I'm with Betty on Maroš Šefčovič. I'd definitely have a nice cocktail or two with him.

I have long harboured a secret crush on Connie Hedegaard, the brains behind the Copenhagen Climate Summit, which so spectacularly saved us all from the scourge of global warming. She looks like a game lass and I regret that she's been shunted from a top ministerial post at Christiansborg to eternal obscurity on The Commission because now we don't see her on TV any more.

Dude, I can't believe you're not going for Maroš Šefčovič, who, in my mind, bears more than a slight resemblance to your tedium files weird crush, non?

I don't know about anybody else, but I am quite looking forward to the Apocalypse of the Hung Parliament which is surely in the works for Friday. Of course, if I still lived in the UK I might think differently, as I cannot imagine there will be another thing on the telly or in the papers for the next year or so.

Have you got a new Interim Head Potato in place in Belgiana yet? My Governator will be out of work in a few months, you are more than welcome to borrow him if you like (no, no, don't thank us, it's the least we could do).

Couldn't choose from Barroso's gang, and feel no better about the lingering question, "Do I want to be here when the shit hits the fan." Might as well live in the country that produces officious matrons though.
Seeing as how we seem to have the same neighbors, just drop the boys by next time you need five minutes. Seriously, I'm more afraid of them than they are of me, I can do Auntie Fraud.

You're right: definitely Algirdas Semeta, with his interestingly mean glasses. I see him as that bendy, evil Agent Something in the Matrix.

Who would not enjoy taking off his specs and loosening his crisply-knotted tie?

Gosh, I was pondering the very same issue the other day, only with the UK election candidates. Any thoughts anyone? I decided that at a pinch (and it would have to be quite a vicious pinch, i.e. to prevent the slaughter of my loved ones) I would opt for Nick Clegg, but only with the bare minimum of touching and bags on heads. And yet a little voice inside me keeps saying 'Gordon Brown'.

Olli Rehn looks like himself unaware kink fan, while Barnier has an allure of old playboy.

My fave is innocently looking Laszlo. Tant mieux if he can repair bikes, change tyres and water pipes.

Also, look at pics of Neelie Kroes and Viviane Redding: they have they same botox touch, though it seems that Kroes procedure has been less succesful!

Andor surely? What's not to swoon at?

In a previous life I had to deal quite a lot with Tajani and the experience has made it impossible to view him as anything other than a total arse.

(PS, you've definitely been there too long!)

Your blog makes me laugh out loud awkwardly in the office.

László Andor is clearly peerless in this matter!

Though Siim Kallas deserves a medal for that moustache. I want to see him shape it like Poirot!

I second Olli Rehn, his piercing eyes and slightly naughty expression. Sort of like a constipated Mr. Darcy.

I have a strange urge to go out into the wilderness and adopt some hairy caterpillars, keeping them in a glass jar for observation...

It's either your Hollywood Politicians, or it's election fever here setting in!

Gunther Oettinger looks like he was made out of silly putty.

Siim is my most favourite Estonian name. So I named my mom's cat it. No one in Marshall, Michigan (ESPECIALLY the vet) understands why we have a cat named Siim. No, not Seam, Siim. Ess-eye-eye-em. It's Estonian. No, stop laughing!

Semeta looks like that SS officer (whose name I have forgotten, of course) on " 'Allo, 'allo!"