At some point last week I started to fixate on Crabzilla. Crabzilla is a giant Japanese spidercrab, resident in the Sealife Centre in Blankenberge on the Belgian coast. He first came to my attention after Fingers mentioned his trip there during Gulag Whelk Picking Camp, leading me to idly google it in a search for weekend distraction.


"You didn't tell me there was a giant crab!"


Surely one should know for sure if one has seen a giant monster crab? Undeterred, I pore over Crabzilla's vital statistics. The English version of the website seems unsure whether Crabzilla is male or female, but eventually plumps for male. He is forty years old, 15 kg and has a "claw span of 3.5 metres". I love that phrase, "claw span". He has come from Birmingham, which pleases me greatly. He is, the picture suggests, fucking huge. The BBC suggest he is "not aggressive", which is disappointing, but I soldier on. "Our aim is to thrill you" says the Sealife Centre website, seductively. "Most of all we want you to have fun". This is what I want most of all too. That, and to shake hands with a giant spidercrab.

"Would you like to go back to the Sealife Centre, Fingers? You could play Nintendo on the train.." I frame my question as seductively as I can.

He seems bemused at my enthusiasm, but does not protest. Lashes is easily brought on board when his query about whether the Sealife Centre has a shop is answered in the affirmative by his brother.

On Saturday I check the trains. Jesus, it will take us an hour and a half to get there, not including Sunday trams, or the ten minute walk from the station. I estimate this will make for a 4.5 hour round trip (I am not wrong). No matter. Paris is worth a mass. A giant spidercrab is worth 4 hours of suburban public transport. Fingers's memory seems to be returning slightly.

"He doesn't move", he says, a note of warning in his voice. "Like a crocodile".

I hope the not moving will add to his general air of menace; I hope he's actually alive. I am already starting to view him as a spiritual soulmate.

Sunday. We are tired and crochety after staying up for Eurovision, but I manage to harry them out of the house by ten. It is pouring. Fingers refuses to wear his coat. Our whole neighbourhood seems to be having some elaborate street festival, with cheap tat to browse through, hamburgers, fairground rides, probably lots of small children of our acquaintance. It would be perfect, amuse the boys for hours for a small number of Euros, but the die is cast. We are going to Blankenberge to see a giant crab, and hang the consequences.


Many hours later, most of them taken up with Pokemon, we arrive in Blankenberge. It looks like this: 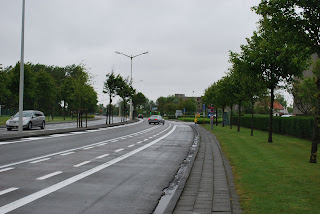 We set off on the long march to the Sealife Centre, amusing ourselves by trying to find the most physically unfortunate candidate on the local election posters. 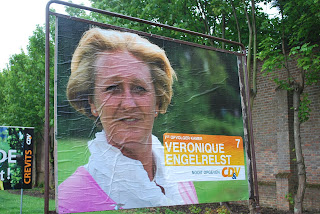 It is a long way, but eventually we spot a small blue flag, whipping around in the gale force winds. By now, we have built it up to be some kind of Aquatic Disneyland in our heads. The posters of Crabzilla in all his B-movie glory in the entrance only serve to fuel our excitement: 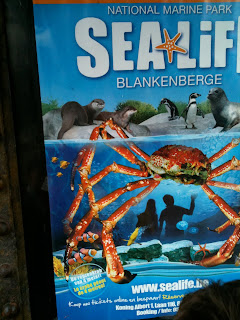 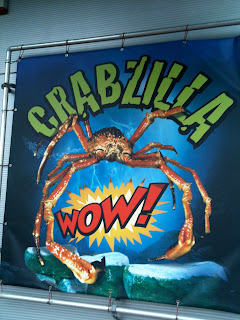 Once we are in, however, I am instantly reminded of the aquarium we once visited in, was it Southend? Possibly. Anyway, the high point was the model of Brum you could feed 20ps into outside. The whole thing could fit into our house. Why do I always do this? WHY? I look around wildly trying to calculate how long we can spend on each exhibit to try and prolong our visit beyond 20 minutes. Short of Crabzilla engaging us in some kind of laser Pokemon duel, it's not looking promising. My calculations are shot out of the water anyway, as the children run at high speed straight to "Claw world" (I like this), bypassing the 30cms of 'Amazonian Rainforest Experience' and the obligatory pollution exhibit. 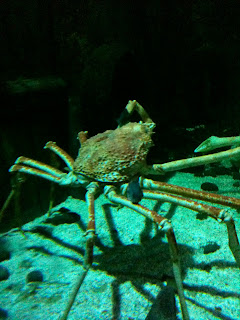 
We stare at him through the smudgy glass. As Fingers predicted, he is not exactly frisky. He's a - very large, admittedly - crab. He does not tower over us like a spiny, terrifying colossus. His eyes do not shoot lasers. He is slightly shorter than Fingers, but with longer and more numerous limbs. I am anthropomorphising, yes, but I'd say he looks pretty underwhelmed at his new quarters. A small fish is bustling along his limbs, cleaning off some algae. If you watch very intently, you can see his feelers moving slightly. 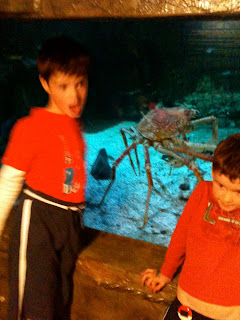 It kills 30 seconds. The rest of the aquarium another five minutes. We venture outside where some pissed off penguins are pecking desultorily at a Calippo wrapper. It's a bit too cold and wet to stay out there for the magic of the 2 seals in the entirely opaque water, or the small ball of brown organic matter in the middle distance that may conceivably be an otter, but might equally be a sparrow.


"Look, it's Sparrowzilla!" says one of the boys, smirking.


On the way out we encounter Eelzilla - uncomfortably confined in an aquarium he can barely straighten out in - and the boys eat Hotdogzilla. I shell out Eurozilla for several tatty plush sea creatures that are already disintegrating as we exit.


We walk back along the beach, which is actually pretty pleasant, though my sinuses are screaming at the gale force winds. I take a photo of Fingers cantering along the deserted sand. 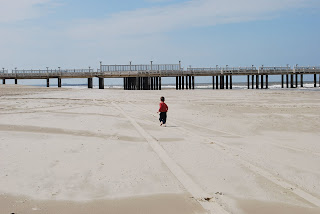 The sun has actually come out, which is nice and so have the kitesurfers, en masse. We sit behind a windbreak and watch them do seemingly suicidal things, then we head back to the station.


The boys do not bother to answer me. They are trying to beat the Arena Champion on Level 6. Four hundred hours and a great deal of shouting later, we get back home.
Posted by Waffle at 18:14

that sounded AWESOME. we went to the London aquarium. It was crap, too. and it cost about a million pounds. today we did lego, and that was similarly crap. and no one will eat their dinner. only the baby is nice, but he just baby-vommed on my hands. pfft.

That reminds me of my outings with my girls. *sigh* We're much more successful at shopping trips now.

Most of our outings turn to rat shit too, today was just one of them! After a major tantrum in John Lewis where I nearly ran from demon 3 year old and stood tutting like the rest of the pissed off bank holiday shoppers, we went to a farm with farm shop and children's farm animals etc. On enquiry we ask about the animals and are told 'we only have hens'! On a positive note they did have a filthy bouncy castle that killed at least 50 seconds of an otherwise really dull bank holiday. Off to Abersoch next weekend for a seaside break, we can only hope it's a bit more of a success!

My Sunday was spent in a caravan at Inverary (aka Midgie Hell) with a 9 year old boy and an 8 year old girl who were 'not talking' to each other and realising that the only entertainment for 20 miles was Inverary Jail.

Momentarily consoled self with mental picture of abandoning said boy and girl in Inverary Jail and fucking off to Mexico to drink lethal home-brew and samba until dawn.

Wish we'd had a Crabzilla.

You should sue them for false advertising. When you said Crabzilla, I was thinking the crab version of Shelob(giant mankilling spider in Lord of the Rings). Also, I thought your made the 'Crabzilla' name up yourself!

It looks like the Sealife Centre in Oban. I think you should go and then compare notes!

I FELT that. Every step of the long walk to the damn crab. I have been there. And now, like Wrath of Dawn, we shop.

'Sparrowzilla' and 'Pengzilla', I like that- it sounds at least like Fingers and Lashes are learning (at the hands of a master, obviously) to react with long-suffering quick wit to Belgium's many small dissappointments. A fine double act in the making!

Love Fingers, all business and still wearing the pedometer.

40ish crabs are legion here, or so it would seem.

It would have been way cooler if Veronique had had to prove her election worth by being immersed in the tank with crabzilla and forced to wrestle with it. Possibly wearing a Mexican wrestling outfit.

I do not know why they don't just appoint me as the Belgian minister for cultural affairs. I would be top.

Katyboo. When I am Prime Minister (elections 13 June) I will appoint you, of course. I would truly have loved to see that.

Antje - Well spotted. He puts it carefully on his pyjamas at bedtime, then transfers to clothes as soon as he gets dressed.

Kippaxlady/Alison - Bank holidays are shit, aren't they? Hens do not equal a farm.

theharridan - You know you're my heroine don't you? I especially liked the bubblegum breakfast. I approve wholeheartedly.

You realize however, bigger kids= bigger pains in the arse doncha?. Then one day they will of course become human, around age 30

When we lived in Texas, we had a choice of two aquariums: the fancy-schmancy Official Dallas Aquarium of Awesomeness at $40 a pop where you could get your arm torn off by an animatronic shark for an extra $25 or the weird little aquarium at Fair Park. Being cheap bastards and not liking new-fangled "entertainments" anyway, we chose the latter. And it was AMAZING. It was like going back in time 40 years when everyone's expectations were much, much lower and there was more public elementary school–esque terrazzo and cloudy glass tanks everywhere. I loved it. It even smelled like 1972. Crabzilla would fit in really well there, should he ever decide to relocate.

You can develop videos from seconds to minute. The musically online on Musically. In the Musically Video Saver Application.

For users to come back to it profile as well as correct their error. Apps like Tinder By attaching the app to user's social networks, it will certainly reveal.

Android phones which have actually been rooted a term that implies Netflix Login Netflix is a monthly-subscription-based streaming media DVD-by-mail service.