I will save you our crab exploits for tomorrow. For tonight, I note I have now been living alone (well, without another adult) for six months. It's time for a performance review.
1. Domestic science
After a slow start, Emma has begun to grasp the basics of domestic hygiene and no longer expresses astonishment and disproportionate grief at the manner in which the house becomes dirty again after cleaning. The ongoing détente with the hoover has yielded good results, particularly on the stairs. Floor washing, clothes piling, and picking up the endless stream of dreary election flyers off the mat remain black spots in an otherwise much improved term.
Her enthusiasm for all forms of lavatory cleaning product is to be encouraged, however recent experimentation with stain removal revealed an immaturity that must be addressed before such advanced techniques are essayed.
B-
2. Home economics
In six months, Emma has cooked herself the sum total of 5 meals that can be dignified by this description. She needs to grasp the following basic concepts in order to progress:
- Just because a crème caramel contains eggs, it is not a healthy protein rich meal.
- In order not to become rolling, incapable drunk after two glasses of wine, an evening meal is essential.
- No, you do not need to buy any more packets of biscuits.
- Or Cadbury's Caramels.
- The mere act of buying broccoli does not count towards your five a day. You have to eat it too.
F
3. Accountancy
Emma has signally failed to develop a system of budgetary management more sophisticated than 'I can usually just SENSE when I'm overdrawn'. Ongoing issues that must be addressed as a matter of urgency: hiding the balance display when withdrawing money from cash machines, being 'too shy' to invoice for work, disappearance of letters containing PIN codes, childish desire for "nice things", failure to put foot down when faced with wheedling children, imminent financial apocalypse.
F
4. Personal and Social Education
Emma has failed to attain a number of key milestones in this class and must work harder to acquire the necessary skills:
- saying No.
- Dealing with conflict without requiring six months intensive rocking curled in a foetal ball.
- Use of the telephone for its intended purpose (locating telephone would be a good first step, here).
- Asking questions and maintaining a conversation without overwhelming awkwardness.
She should be congratulated, however, for both becoming much more comfortable on her own, and spending large parts of the last six months laughing and laughing and laughing with people - whom she maintains actually exist - from the "internet".
C+
5. Music
Emma has performed outstandingly in concert attendance in the last six months, leading to a deluded belief that she is down with the kids. In fact, a shallow patina of credibility conceals a secret fondness for 'nice tunes that do not make my head hurt'.
She has also developed a disturbing tendency to fixate on songs in the chanson française canon which serve her poorly both in sanity and credibility terms. This should be discouraged.
C-
6. Veterinary science
The dog is still alive. 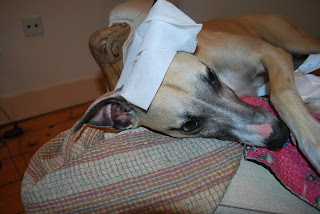 It may wish it weren't.
C
(Incidentally, I like this from this evening: 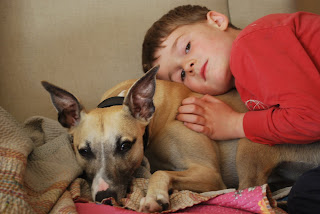 Compare and contrast with this: 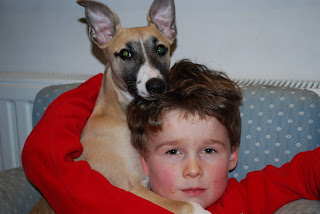 Taken almost exactly a year ago).
7. Wood/metalwork
The ratchet screwdriver remains as puzzling to Emma as Fermat's Last Theorem, whilst keeping the Allen Key in its plastic finger protecting rectangle, a task suitable for a child of six, continues to elude her. Her hook hammering is, frankly, lamentable and drilling is currently the object of an elaborate bartering arrangement that causes us some concern.
F
8. Psychology
Despite a range of self-sabotaging behaviours some of which are partially described above, Emma considers herself 'happy'.
A
Overall grade: Could do better. Could do a whole lot worse.
Posted by Waffle at 22:50

Home Ec section my favourite B+

You are a legend!

You missed out your A+ for blogging!

Excellent report card. I shall take you to Nardini's for a celebratory cone the next time you are in Ecosse.

An A+ post. Well done, Emma. You have shown a marked improvement all round and I would like to see you aim for six meals in the next half of the year.

PS. I love that you feel 'too shy' to invoice. I'm exactly the same! Pathetic really, when you have to invoice to buy the nice things.

I feel shy about invoicing too and am also terrified of my phone.
Really hilarious post!

A+ for entertainment value!

fantastic! you get a gold star!

as for the little plastic allen key holder, i have never been able to master it despite having put together a whole IKEA kitchen while sober as well as several pieces of IKEA furnishings while drunk. the little plastic thing is, to me, simply a device created to make people say "fuck" a lot.

But Distinction in Craft, Political Analysis and General Funniness.

Somewhere between Domestic Science, Accoutancy and Home Economics, I think you should have given yourself a grade for the trip to the Commune (I would suggest a bare C for merely getting there, B for finding the right guichet and A to A+ for actually getting what you wanted out of the visit...). Obviously, this ignores the weeks to months of stress prior to the visit working out that you do have to go, so what time would avoid the queues when they are actually open..but then the final grade does not, I think, always reflect the effort put in...

A A+ for striking out on your own and living to blog about it.

I'm definitley not scared of the phone but I hate hate hate voicemail. Especailly since it seems I can't skip to the end of messages and it forces me to listen all the way through before hitting the delete button. I dread to think how many messages will be waiting for me once I get back to work.

I actually love this :-)
And yes, you do need another packet of biscuits. Always. Mmm, biscuits!

As your dog-share, i think you get A++ for the veterinary science and dog education. Weepette is sometimes spaced, but all in all very enjoyable dog that one can feel proud of (especially in hot weather)!
But actually I'd say that it's just nr.8 that really matters; all the rest is subordinated.

Hmmm. I think everyone should do that. Take stock, hand out grades. I am forever dishing out grades to those gnarly kids, I should do the same for me. I fear I may not do that well in the home economics dept. Congrats on your psychology grade; that is the most important.

In my family, that report card would get you a chocolatey present!