Tourist Adventures in the Kingdom of Belgiana

I have been very remiss with posting. Sorry. Not only that but the only two headed baby I have to show you is one that we tagged ourselves on the Ghent graffiti wall on Wednesday. 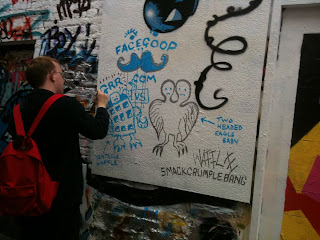 I have been having a mini-break in my adopted country, complete with my adoptive son. It has been lovely.
Firstly, we went to Ghent. Despite the fact that my mother spent a year in Ghent in her twenties, managing to get seriously ill on a diet of nothing but coffee and liver pâté (she didn't realise it was Flemish speaking, and these were the days before self-service shops), I had never been there. Not only did Mr Smack Crumple Bang take me somewhere I had never been in my own country, he also persuaded me to drink a beer I actually LIKED (I haven't drunk beer since wrestling with pints of bitter in the dour pubs of York in my teens). It was a day of shocking revelation, the worst of them being that the inventor of the Brussels Waffle - which, fact fans, was in fact invented in Ghent - must have been a sadistic, twisted bastard.
We spent some time trying to find the cafe where the Brussels Waffle originated, not aided by the fact that the whole centre of Ghent had been dug up, making it unidentifiable using any conventional navigation system. We resorted to pointing hopelessly in opposite directions, snatching the map off each other and snarling, like people used to in the olden days before the iphone. We were determined to find it having read an interview with the proprietor in Tom's guidebook, which contained the following, frankly admirable, exchange:
"What do you think about the separation of Belgium? Do you think it will happen one day? "
"I do not care about that. I only care about waffles".
Sadly this was nothing more than a cruel lure for the greedy and misguided.
I have an exceptionally strong stomach for sweet things. I have adopted the Belgian cappuccino (sweetened squirty cream on a black coffee) without demurring. I have eaten most of the contents of the Tin Tin Tin, even though it contains such horrors as chocolate coated speculoos. But this! THIS. Was an abomination.
Exhibit 1 "Apple Fritters": 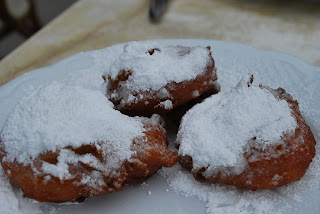 Firstly, marks for presentation are running at about minus infinity here. But wait 'til you taste it! The petrified turd look pales into insignificance compared to the fetidly disturbing taste of BEER BATTERED APPLES. They were even worse than the Belgian fairground staple "Pets de Nonne" (nun's farts), which they sort of ressembled. If this is what it takes to become Belgium, I will declare in front of Herman de Rompuy, the 92 tram and all I hold dear, that I DO NOT WISH TO BECOME BELGIAN.
Exhibit 2: 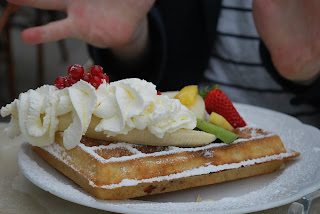 One might surmise on the strength of this picture that my companion did better on the baked goods. That would be unwise. Not obvious on the face of the giganto-waffle, admittedly, this whole concoction was doused in Grand Marnier. The Brussels waffle also has a slightly savoury, Cilit-Bang flavour. I cannot in all conscience recommend it. 24 hours later, we still hadn't entirely recovered. And for this we missed the Docteur Ghislain psychiatry museum with its secret room of two headed babies. We will not be led astray in this manner again.
Ghent was also the scene of this exchange:
"No. I will not get in a boat with you. Do you not know about Audrey Hepburn and the permanent eye infection?"
"What? What on earth are you talking about?"
"Audrey Hepburn fell into a canal filming something and NEVER RECOVERED. She had permanently weeping eyes".
"Crap. You're making that up".
"It's absolutely true, let me check and prove it to you".
....
"Oh. Ok, it was Katherine Hepburn. In Summertime. But look! "permanent eye infection". Audrey Hepburn is Belgian of course"
"Now you're just being ridiculous. Of course she isn't".
"She totally is. Look!"
"God. Amazing. Marvin Gaye is Belgian you know".
"No he isn't"
"Yes he is. He was shot in Belgium"
"Tom, I think that was a dream" .
"No, it wasn't, let me check".
.....
"God. I was TOTALLY sure that was true. Damn! I have told loads of people that story".
"Ha. My dad was proud of starting a rumour that Shirley Bassey is a fully qualified medical doctor" .
Apart from Ghent, we also braved the singularly depressing Cartoon Museum, previously immortalised with my tears on these pages, to see the Moomin exhibition. I prepared Tom by taking him through the Mall of the Damned, City 2, on the way. I was rather pleased with this strategy as almost anything - plague, decay, Braine L'Alleud - looks glittering after a trip through City 2. I wonder if there exist any realistic photos of it? Let me check. No. It's a million times worse than this picture looks. Because, see, this just makes it look unremarkable and a bit dull. You'd have to see the underground layer of Sarajevo style rubble, smell the heat and dust and stale abandoned waffles, and the lost tourists scavenging for metro tickets amid the howling of the damned.
Anyway. If you screwed your eyes shut and walked very fast to the top floor, the Moomin exhibition was delightful, if low key (photos to follow, I hope in due course). I'd like to recommend it, but I think that would be cruel. You have to be quite well prepared for Belgo-doom to survive far enough to get there. Let's say, if you'd like to go, call me first and I'll take you. It's the least I can do for the Belgian tourist industry.
Posted by Waffle at 19:15

I am from Glasgow environs (the home of the Deep Fried Mars Bar) and even *I* would not be prepared to stomach the sugary apple concoction.

.....would have given that booze-soaked waffle a go though.

Oh God, now I need to do the word verification thing. I get this wrong at least twice every time I post....wish me luck

hope you make it next time! gent is so beautiful, and this museum is so creepy and awesome. good pair. x

moomins? THE moomins? god i love them! i was raised on a steady diet of moomins which, i think, explains my constant state of unease...or maybe it was just a crappy translation.

And I thought my lemon cake-pyramids were foreboding. Those apple-fritters are positively... frightening in a not food disguised as really bad food way.

Wait, you missed the TWO HEADED BABIES and the straightjacket collection? I've been drinking, so it took a minute to register.

Return to Gent you will, Jaywalker. These things must be seen.

The Cartoon Museum in London is great. Round the corner from the British Museum. At the moment, they've got a Gerald Scarfe exhibition because it's his 90th or possibly his 80th birthday. Not his 100th. I'd not get that wrong. Damn.

what is a nun's fart? how intriguing...

Keep eating your speculoos, and soon you will have room for your tin Tintin in that Tintin tin. What was the beer you liked? I seem to either like a given Belgian beer very much or loathe it. There is not much middle ground.

Crap. I always thought Audrey was Swiss. It just goes to show the power of a non-specific European accent.

I would be all over those apple things, sorry.

Those apple fritters are obviously Belgian orphans. They look like they got fried before Christmas and have sat sweating in their own fat since. And then every morning someone puts more icing sugar on top in the hope that they will be adopted by kind and blind descendants of Audrey Hepburn.

Do you mean the Moomins as in Papa Moomin etc?! Please say you do. I LOVE them.

She Wore It Well said...

I'll admit I haven't had my breakfast yet but I would absolutely eat that giant waffle covered in Grand Marnier. Sounds much better than a packet of pork scratchings in a dour York pub (where we will be going in less than a month).

Thanks for a great post - the google exchanges cracked me up!

Good god, the centre of Ghent is STILL totally blocked off?? I went there with my husband a YEAR AND A HALF AGO and our sat nav was totally stymied by various construction blockades. We could actually SEE our hotel from across the main square, but couldn't get to it. We spent over an hour blindly circling the ring road, making suggestions through gritted teeth and trying not to kill each other.

Other than that, I remember Ghent being quite nice.