I will continue with the html equivalent of talking about the weather until things are clearer here in Belgiana. I am struggling. If posts get hideously boring, just tell me and I will take a few days off entirely. I have lots of other productive and pleasurable things I could be doing, like grinding my teeth to stumps, biting my cuticles, and picking at a small skin tag on my neck until it looks like I have a massive lovebite. Yeah, on second thoughts, let me blog.
Happy things:
1. . Einstein. I am mainly preoccupied with the size of Einstein's head. Remember the pygmy jerboa (this bears watching again, even if you do. The masterful moment when it falls off the scale still works for me)? And how we established it was approximately 83% head by volume? Einstein is not quite that masterfully HEAD, but I reckon he's about 68% head. He troubles the laws of physics almost as much as a bumble bee. He would look lovely in my large green handbag. I want those tiny hooves to pet.
2. Fingers has had a deliciously short haircut. Since he is very very brown from his week at the gulag calisthenics camp in Ostende, the haircut gives him a centimetre of very pale white contrast skin around the hairline which looks particularly lovely. I could quite happily hold him in my gnarled claws forever right now, if he would let me. This is a pre-haircut picture but I love how absorbed he is. He is always absorbed. 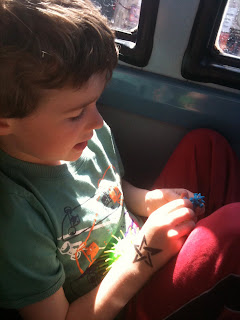 3. His elder brother has been sticking notes on my back all evening, then hilariously executing what they say. They say things like "tape moi" and "donne moi un coup de pied", but with ornate, 8 year old spelling. I love primary school humour. Then he drew Oscar's brain, entirely unprompted. 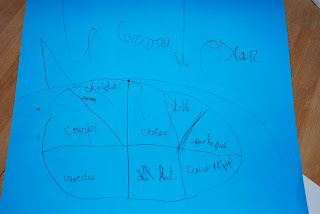 You probably can't read it but it says "balle, crier, chocolat, courir, mordre, lit, caca et pipi, sniffer les fesses" (ball, shouting, running, biting, bed, poo and wee, sniffing bottoms). Very accurate. Maths is less of a strong point. We both ran into difficulties tonight on the 7 times table in ways that would cause my father, the statistician, to doubt my parentage. Sssh. 42 is totally 7 x 7. Sort of. Not.
Later, I tried to put up curtains in his room, using Iris, the deadly, gigantic, rickety stepladder while he read in bed.
"Lashes, do you know what number to call if I fall off this ladder?"
"Hein?"
"Do you know who to call on the phone if I fall off the ladder and hurt myself?"
Long pause. Page turning. Ominous creaks from Iris.
"Lashes?"
"No"
"118. CENT DIX HUIT. Ok?" swaying, precariously, 8 feet up, on Iris's loose rungs, wishing for one of those red buttons on a piece of string from the back of the Sunday supplements circa 1983 ("Mrs Hope knows help is coming").
"Ouais, Ok". Not looking up, even momentarily.
I related this to M, who said "he would just leave you until the weepette ate your face". She is correct. I am really REALLY happy to have them back right now. I feel a lot saner already after an evening of just picking up their strewn clothes and mini egg foil and listening to them bicker and stick post-its to the dog.
4. I am listening to this a great deal. It's quite a sparse, insubstantial thing, so I'm not sure why it appeals so much. It does though. It might just be the contrast with the Von Trapps who spent yesterday tormenting me with STING.
5. There is no 5. I have been trying to think of one for an hour. Erm. There is a beautiful crop of dandelions in the back garden. The dog has not peed on the fridge for over 2 weeks. I found three temazepam hidden in a box of teabags whilst tidying. Zooborns (check out the baby capybaras, the ones entirely underwater are particularly fine). King Albert has appointed a temporary crisis potato to sort everything out, though personally I think there were many suggestions in the comments that far outstripped this in ingenuity and cunning. (UPDATE: King Albert really should have listened to us, because the crisis potato has turned out to be no use whatsoever and now we really don't have the slightest excuse for a government. Ah, well). Other than that, it's all pretty much ratshit. It might be time to head back to Kiss & Ride tomorrow, we could all do with some light relief.
Posted by Waffle at 23:37

Ahahhaa. See? I AM LOST. I cannot even do my 7 times table. We were totally confused. Where does 49 come into it? Isn't 49 involved. BRAIN MALFUNCTION. Oh yes. That's 7x7, right? Jesus.

"temporary crisis potato" -- belly laughs. So excellent. Where were you when I was forced to take Texas Government??!

The Oscar's brain thing is awesome. I love the way kids' mids work. Hence thelooking after them as my job.

You sound(or is it read?
I don't know.) better, it seems the sprogs are good for you(in both husband's family and mine, children are refered to as 'the sprogs'.)

the words 'temporary crisis potato' made me laugh so hard tea came out my nose. AT least you are able to bring humour to the internet world!

There is no head bigger or better than your very own Belgian Queen of Big Hair. You should be so proud.

Oh, we too have been providing lots of amusement to our 9 yr old son by pretending not to notice the "kick me" stickers he slaps on our back! (Also trouble with multiplication tables to mortification of our son's teacher, but not his father -- a mathematics professor.)
Alas, we have no diagrams of our cats' brains (but if we did have such accurate insight we learn that Run Away, The Boy, Run Away!! was dominating the brainwaves.
Hang in there -- your blog is always educational, heartening, and greatly anticipated!

weepette should be recruited as their maths tutor. needs to earn its keep. damned useless minions!

springtime is here. you sound wonderful. and i love that big green handbag.

Well, I can't think of a prettier dog to have my face eaten off by than your Weepette.

Re times tables - there is a great website http://www.bigbrainz.com/ where there is a free download program that REALLY helps master the tables.

I bought the upgrade for my Sonshine and he can now recite his tables - mostly - very well.

I recommend that for YOU. The boys will be fine.....

Would have thought there's no need to worry about the govt., because after awhile you don't even miss it. But then it occurred to me there are a disconcerting number of nations around without one. Though one headed by an ex-intern or whatever of Christopher Hitchens, who speaks Dutch and has a family full of Catholics would be amusing (Reunite Brabant!).

Mrs. Von Trapp (the second one, of course) was raised a socialist, perhaps this explains the Sting barrage.

2) Have you thought of having emergency practice runs with the boys? You could think up various dire scenarios and have the boys run through what they'd do. I'm sure the emergency services would embrace this innovative parenting strategy.

3) Why were the tamezapam hidden amongst teabags? Do you not know that this is the type of place that burgulars look in first? Is this something you do often? No concern in my voice *at all*

4) Don't bite your cuticles. When you're feeling better your hands will look like crap and happy gesticulations will have to be performed with your palms always facing outwards and everyone including the tarantulas will disown you.

I just noticed that the capybara mother (on Zooborns) is named Courtney. That seems like the most un-capybara-ish name possible. I don't know what you DO name a capybara, but definitely not Courtney.

VW fillati. That would make an OK capybara name.