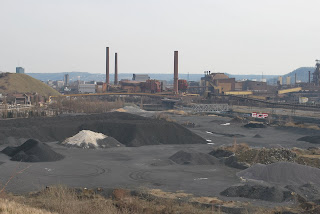 Well, that was actually, properly amazing. 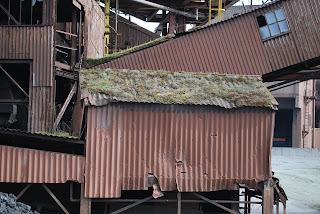 I have finally - finally! - been on my Charleroi Urban Safari. Charleroi - voted ugliest town in the world (by the Dutch. Why do they get to choose?). I can't quite gather my thoughts at the moment. I'm exhausted from scrambling through gaps in fences, through holes in walls, up slagheaps, along ghost metro rails. 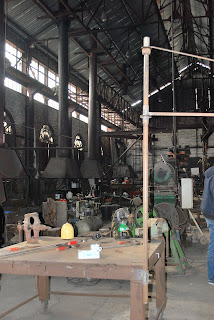 I have notes that say things like "Sharon Stone Largo Winch??" 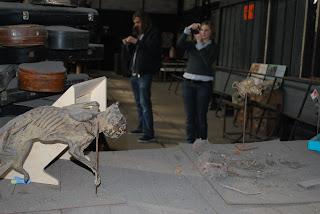 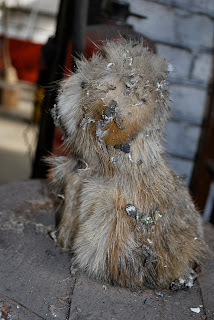 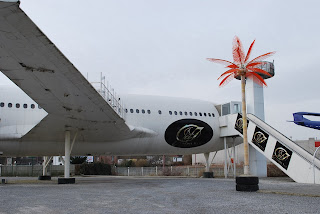 "Olympic swimming pool - 2cms too short".
I need to lie in a darkened room for a few hours to remember it all.
If you are ever in Belgium (unlikely) and feeling adventurous (possible), I really can't advise you too strongly to go and do this. You probably won't believe me, but it really has to be experienced to be believed and Nicolas, a gangly, lunatic Jesus figure in a white transit van, is a wickedly funny, slightly deranged, touching guide. This was AS GOOD AS MEXICAN WRESTLING. I wouldn't say that lightly, believe me. A lot funny, quite a bit tragic, hysterical and sobering all at once. Look: 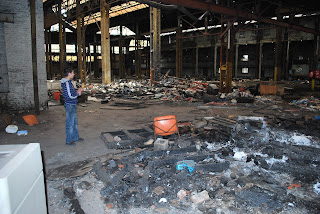 There were kids barely older than mine playing in this place. Sparky, funny kids who followed Nicolas around asking him questions and showing him their dens. In the middle of the most chilling industrial wasteland. Brrrr. Goosepimples.
*"Ugliness has one advantage over beauty - it isn't diminished by the passage of time". At one point a canny and very hirsute hobo in this extraordinary place quoted this from Gainsbourg (you can't spend much time in the company of French speakers, especially ones of an artistic bent, before this happens).
Posted by Waffle at 22:29

Good god, i thought you were kidding! It's pretty sobering isn't it?

On a good note i can put off dusting for another month.

Good God, it makes Greenock look like the Riviera! Mind you, if you did a tour of Greenock, you'd need an armed escort through bits of it

Still, it's fantastic that they can look at their environment and accept it for what it is, and start making the most of it.

Am I the only person who thought the "nuclear slagheap" was a dog, at first glance?

Word verification "sparysup" which is what you say to a nuclear slagheap puppy to make it heel.

Sometimes the European world is a frightening place.

I'm also a little tipsy, so remind me to cancel in the morning.

I have been to Charleroi but never realised it held such charms (I was quite fond of the burger and chips at the airport though) - you've sold it to me....

Thought that only existed in India....

wow, reminds me of the 4+ years i spent in the oil-rich northern hellhole of fort mcmurray, known to most europeans as canada's dirty little oil sand secret. except it was far less interesting.

I have the right shoes to wear there, at least. I like your shoes better.

When you posted that photo on Twitter from inside the Rockerill, I thought, "Charleroi looks like an absolute dump, but this bar looks *amazing*." Was it as awesome as it looked? Could you see us with Mrs T tucked up on those red velvet stools with hemlocktinis in hand??

Wow. That first photo I thought, "Why are you posting pictures of New Jersey?"

OK, I just clicked the link and looked at a lot of those photos and I have to say if you think Charleroi is bad, visit the U.S. Rust Belt: parts of Michigan, Illinois, Ohio, Pennsylvania, New Jersey, New York: dead factory towns, suburban blight, Bruce Springsteen-land. Drive the Turnpike from NY to Philly, it's like Mad Max. There are parts of Jersey where you just have to roll up the windows and hit the "recycle air" button. And yet, it is really fascinating and has a weirdly industrial appeal. OK, I have to go watch a special on John Travolta now.

Was that a mummified cat in photo #4?

It was apparently just a newspaper poll that let the Dutch decide the ugliest in Europe: http://www.onanslemming.nl/?p=2149 (The Volkskrant), and since the Dutch make jokes about the Belgians like the US makes jokes about the Polish, it's no surprise Belgium is the target of their scorn.

The Dutch are good at hiding their industrial ugliness, by hiding them away from any place you would normally go, and voted their two established bedroom suburbs as their own ugly cities. And of course, the port of Rotterdam makes MONEY, how could that be ugly?

That is shockingly ugly, but I have to agree that parts of Pennsylvania and upstate New York would be tough competition.

I'm with Persephone, I thought the nuclear slag heap was a dog to! Wow, these photos are immense!