On housework and capybara mating habits

Yeah, so yesterday. One minute I was wondering half-heartedly if I should try and do something with my newly constructed chest of drawers, and suddenly it was four hours later and when I regained consciousness, I was manically ironing the ribbon trim on a pair of knickers (subliminally influenced by reading this yesterday, I think. I'm very suggestible). Thank god this kind of anally retentive fugue state doesn't happen to me often, but I now have a fairly tidy bedroom and the dressing room apparently has a floor, who knew? Flush with the success of, er, putting underwear into drawers, I have branched out into hanging all the pictures that have been knocking about on the floor since November. You would never guess I have an article to write, would you? Displacement activity is grand.
Someone requested more pictures of the Salmon Palace, so here are a couple with My New BED, constructed on Monday night (my rôle: stand around, get things wrong whenever I tried to 'help', generally be a waste of space, remove bolts from the dog's mouth occasionally). They are very far from impressive, remind me never to work for an estate agent. 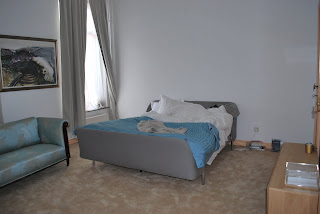 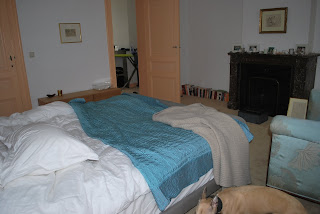 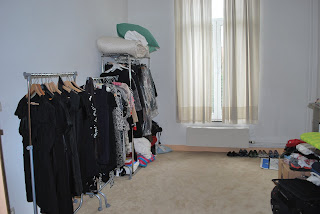 Ok, it's not exactly tidy, but there's a floor.

And here's the kitchen (the tidying binge did not extend to downstairs): 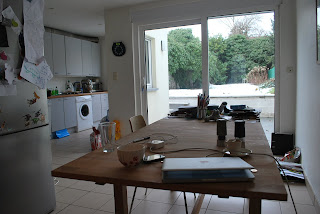 And the rest of the downstairs: 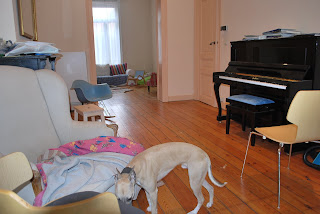 Are you bored yet? Or faintly repulsed?

Dr Capybara is working on your problems, we might be back later if he's in the mood. I have been studying the sex life of the capybara in order to try and understand him better. It's been quite revelatory, though I may never be able to look him in the eye again, knowing what I do about the life-span of capybara sperm. Apparently the female capybara holds all the cards in capy couplings and can choose whether to mate simply by emitting a whistling noise through her nostrils. "If she does not wish to copulate with a certain individual, she can either submerge more deeply or exit the water entirely". Moreover, the dominant male has a tricky time keeping his females in line. "Because of the high speed of coupling and the low speed of the capybara" says my source, drily, "the dominant male cannot prevent all coupling by subordinates". No wonder the good doctor is in such a filthy mood most of the time. I also note that "breeding of capybaras has historically been difficult due to the high incidence of infanticide". Don't let him babysit for you, will you?
Compare and constrast this from Hadley Freeman in today's Guardian, which struck such a chord I nearly cried:
Ask a British person for a date, and they are more likely to hand you a dried fruit. British people do not date. They pull. This rather more violent verb conveys the more chaotic approach to romance than you might have known in your home country. The British method of coupling is as follows: go to a party, get extremely drunk, drunkenly kiss someone you have been making eyes at for some time but obviously never spoke to ­because you were sober then, go home with them, move in with them the next day, marry them.
I mean, it's all very well when you're 19, but it's not quite so impressive when you're 35 is it? But it's the only way I know, and god, it's pathetic. It's astonishing we've managed to avoid extinction as a nation thus far (probably solely due to our impressive rates of teen pregnancy. Way to go, Britain!). I mean, I'd rather be a capybara and just whistle through my nostrils. I might just try it. I suppose it might only attract capybaras, but that's a risk I'm willing to take.
Posted by Waffle at 13:05

Your house looks more like people live in it than mine does, and I've been here 6 months!

I like the sofa thing in you bedroom, your mantlepiece looks really good, and, your kitchen is enormous!

wow, your house is enormous! It looks fantastic!
I wrote about British dating a couple of months ago. It is *exactly* like the guy in the Guardian says. If it were not for booze, we would probably have died out many centuries ago...

My dear, your house is a palace compared to my sty. The carpet in our bedroom has been completely buried since Christmas Day - having been tidied of its previous layer of compost on Christmas Eve.

I know you said you had lots of black clothes, but... that's REALLY quite an impressively predominant colour! You always look exceedingly stylish and elegant, though, despite your sneaky unfounded paranoia. Honestly.

That Hadley Freeman comment is SO TRUE. But I wouldn't have it any other way.

I think your place looks lovely btw, especially the floorboards (I have a thing for wooden floorboards). And the bed is lush - what a great colour. Bugger the salmon, maybe you could start an aspen-grey-and-salmon revival?

the british dating thing sounds exactly like most of my early to mid twenties. you sort of accidentally end up in relationships with people because you've internalised that nice girls don't sleep with people they aren't in a relationship with, so to justify the drunken sex you go and have a relationship which, for the most part, feels exactly like you're merely justifying sex, no more, no less. so glad that's over...for now.

I love all of the identical black dresses hanging in a row.

How do you have shoes on the floor? Has the Weepette outgrown shoe consumption?

Is the UK full of American lesbians? Bacause that's exactly how they hook up, here. Meet, go home together, rent a moving van. Do Brit lesbians do the same?

I love the blue and grey in your room - so soothing.

Your kitchen is lovely and big and bright! Also, love the colours in the bedroom.

I think the British dating formula might just be the most efficient. Why waste time going to a movie or restaurant with someone only to find out they're a dud in the sack later on? Assuming you're not too drunk to remember whether they were or not.

Your place is so grand! And I'm jealous of your wardrobe. Maybe I need to start buying black dresses again.

Does the weepette just skulk around all day long, sniffing things?

Yes Margaret, that's exactly what he does. Sometimes he tries to sit on my knee before realising he's too big and falling off.

Dawn - See, exactly. We don't KNOW if they are any good, because we are blind drunk when we pull. Sigh.

Sinda - the dog is not allowed in there unaccompanied. Or anywhere, come to that.

Polish chick - yes, that's us. Stuck in late adolescence for ever. Pitiful.

Chantal - It's orange, but it's home. How is yours?

HFF - that's because of the children being away for a fortnight. Things stay where you put them. It's bizarre.

Pinolona - You can come and dogsit in it whenever you want, you know...

Lisa-Marie - Well, yes. "Lived in" is exactly the right epithet I fear.

Your bed looks gorgeous - is it safe to sleep on?

I think the American dating thing is just weird. Much more civilised to get drunk, have forgettable sex and cry. Or whistle through your nose. Good luck.

Hi, I absolutely love your blog, and I'm happy to see that you seem to be doing well.

I'm an American and my fiance and I apparently 'pulled', as we got trashed and he has been basically living with me since. He's 42, I'm 31, so yeah, apparently that's how it's done. Ugh.

I don't do dates either. And I usually don't get drunk. I guess one of these has to change if I want to find myself a partner. Do I? Maybe I'll just try whistling through my nostrils just so instead.

Great post and great pictures, love the couch in the bedroom. You have so much space, and you seem to be very good at filling it up LOL.

Alledgedly the mortgage deed is in the post. N1 here I come...eventually. Still haven't exchanged contracts yet. Why does everything take so effing long?

Hilarious article - couldn't agree more. Brits have an irritating habit of swaying as they smile during dates!

Love the blue bedspread though!