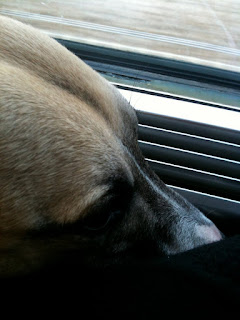 This is the kind of post I had a nightmare about recently. In my nightmare, one of SueBob or Wrath of Dawn or some dreamworld amalgam of the two, commented on a dog themed post saying something like 'sorry, this dog stuff is just so boring. You used to be funny, but this has just killed it for me'. I woke up haunted, both by the dream comment, and by the fact I was dreaming about occasional blog commenters (worse, this is not the first time, and I am quite sure I am not alone either. Back me up, come on). However, the last twenty four hours has been largely devoted to travels with my dog, and you know what? It has been LOVELY. I have had a truly delightful 24 hours. And given my reputation for bitter, miserable, depressive shit, I thought I would at least tell you something cheery. Waffle In Good Weekend Shock! Hold the front page.
At long last, after all these years of daydreaming, and three meandering trains taking in most of the European battlefields of the last 800 years, I finally got to walk round Paris (and Lille. And Ghent, but I never fantasised about that, oddly enough) dressed like a proper grown up, with an elegant dog trotting obediently (sort of) by my side. This was the realisation of one of my cherished adolescent dreams, and it didn't disappoint. Yesterday afternoon, coming out into the surreally beautiful sunshine at the Gare du Nord it was all I could do not to burst into song; I was certainly smiling like a lunatic, and greeting the winos with a friendly wave. Ok, there was probably a large element of relief at actually arriving, which looked far from certain somwhere between Roubaix and Tourcoing with my morose companion staring bleakly at the passing fields, like a minor character from Chekhov contemplating the many miles to Moscow, and the poor yields from his potato crop.
Comme ceci: 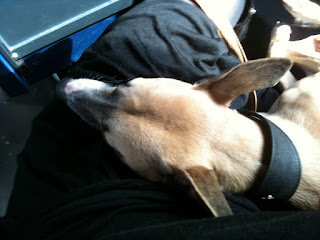 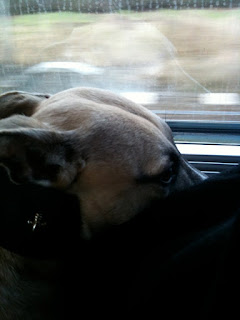 Here, you can see he is nicely wrapped in my MaxMara cashmere coat to protect the train seats and save him from the Siberian winter chill.
Or again, reprised in the Métro, for the benefit of the Japanese tourists: 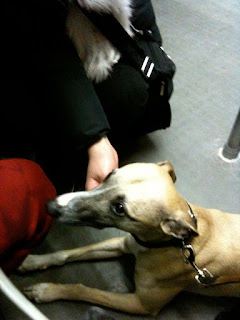 Weepette got a really surprising amount of love in Paris. I haven't felt love like it since I used to parade the tiny and very fetching infant Lashes through Soho and Fitzrovia in the summer of 2002. I would have thought the Parisians were entirely immune to pretty dogs, but it was rather heavenly to be stared at in Paris for a reason other than having grass on my arse (last sartorial crime, mid 2009, stopped several times and told off), dirty jeans, or worst of all, EATING in the street. It was as if the whole additional responsibility, trailing through muddy parks, haemorraghing money at the vets, wiping up pee, had suddenly found its purpose. I trotted him down to the Rue du Bac in the early evening, and spent a blissful hour peeping in shop windows and confirming my long held suspicion that my time in Paris would have been much pleasanter if I had given birth to a puppy instead of a child shortly before moving there.
Even on arrival, my divine hôtesse (to whom so SO many thanks for having me) remarked on weepette's fine ability to blend with a wide range of soft furnishings and self-effacing manner. He was a good talking point when conversation flagged, a cooperative cushion or handwarmer and amused the various children. I had the warm glow of pride I very occasionally get with my children (when they are not picking their noses or pretending to be mute). Honestly, a dog. It's the perfect crutch for the socially awkward and incapable.
After a gorgeous evening of too much to eat and drink, lovely strangers, much hilarity and Pierre Hermé puddings (I will never, not if I live to be 487 years old, be able to host a party a tenth as good as Trish's), weepette and I curled up in a slightly boozy heap of limbs in hôtesse's youngest child's bed (this angelically lovely child has already given up her bed for me twice), with this view: 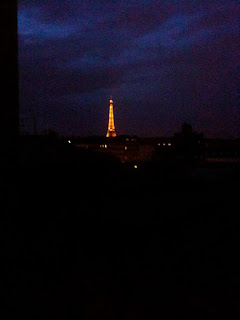 (not strictly accurate, they've turned off the lights by half 2 when we finally made it to bed, but it's even prettier like this)

Paris. You are really pretty lovely (as long as one does not dress like a hobo or have impertinent children, thereby ruling me out most of the time). And I didn't even get a St Honoré aux Framboises for saying that.
Posted by Waffle at 22:29

I've often found the same thing with a pug in tow.... and that view is fantastique! (not so sure about the dreaming of comments)

Respect! For the Weepette! Such a Parisian dog. Please never stop posting pictures of that face - the look of resignition kills me every time.

Reminds me of time when I arrived at Gare Austerlitz and, with too much War and Peace in my adolescent brain, thought we had taken a wrong turning and ended up in wherever Austerlitz is (just checked. Moravia>Czech Republic)

Plus he looks chic in MaxMara...

When I went to Paris, I dropped ice cream cone on my trousers. I think you can imagine what the stylish people thought of me.

Just don't get the same attention carrying a husband around. I must acquire a dog. Easier to tidy up after them.

"Honestly, a dog. It's the perfect crutch for the socially awkward and incapable."

You have perfectly encapsulated the reason I have Goldie. That, and the fact that she is the most charming creature on earth.

Best post ever. Honestly, I read you for glimpses of the weepette.

Oh, you are never ever boring.

The Parisians are lunatic about dogs. I've never seen such dog love. And Oscar is so very charming.

Je suis mortifié. I would NEVER say such a thing, even in your worst dream. Because, as Anonymous said, you are never EVER boring. I am also a crazy smelly old dog (and cat) lady, so understand perfectly.

So glad Paris did not disappoint!

now i will fear going to paris even more. i am excrutiatingly stylish in my head; sadly, this rarely manages to transmit into real life, as i walk for hours and hours and must wear sensible shoes, which have all the sex appeal of margaret thatcher.

WV: womizint - the medicated cough drop strong enough for a man, but made for a woman

If you're going to start talking about Lille, or switch to the inside of Gare du Nord, you may just cross the line--but that dog. That dog knows something about the universe that is escaping the rest of us, and he desperately thinks we should know, look at him! Way too much trouble though, a dog (make that animal, living thing, anyone who works less than fourteen hours a day, mute being a given), so the self-effacing dog posts will have to do.

Having said that, bringing cashmere onto trains to contain any possible residue of anything, can we not make that a law?

Ah, we can never have too much of the Weepette. And thank you for reinforcing my decision to have two dog children instead of, you know, the kind you have to deliver. Bonus: crate training. It will never work with children.

Glad you had a fabulous, happy, lovely weekend.

What a lovely post and great photos of the wonderful Weepette! Really glad you both had such a lovely time.

I think that dog was in Anna Karenina in a previous life...

WV is rosee, how like your wonderful weekend, JW! x

Oooh, lovely! So glad to see that Paris was fun for you, although obviously I can never go there as am terminally un-chic.