Who's for German installation/performance art? Everyone right?
I have had a bit of a crappy week. Sick, plans cancelled, little or no progress on anything writing related, and rather (sssh) lonely. I was so sick of my own boring company, I was absolutely determined to go to the German installation/performance art last night, even by myself. And I am so SO glad I did. 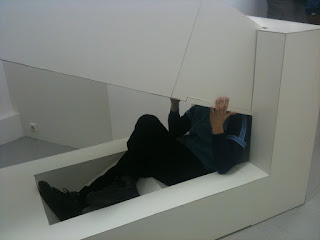 Sitting in the cardboard structure is the artist, David. David is from Berlin and he hasn't slept for about 2 weeks. That isn't part of the installation. But it is sort of pertinent.
David wanted to create a Space without History. Obviously, this sounds better in German where it is one gigantic word. The white cardboard creation isn't the space without history. I made that mistake. No, the Space without History is in David's head "and you can't have it". David told me that when I was sitting here: 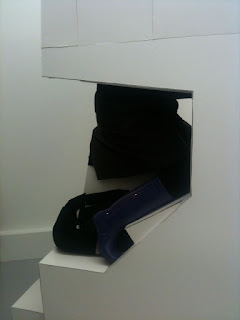 At the other end of his cardboard tube (I rather coveted this lady's purple boots. I was wearing 100% water absorbing ballet flats. It was snowing). This is how the installation works. David sits you at the high up end of the tubelike structure, then he wedges you in with a piece of plywood around your neck and 'interacts' with you. I was lucky because for me David also used screws.
"You really can't escape now"
"Oh, I reckon I could undo them with my tongue"
"If you were really desperate after, say two or three days maybe"
"Maybe I could even just slide my head out?"
"No"
"If I lost loads of head fat while I was imprisoned I could"
"No" 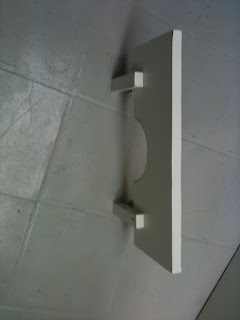 This is the plywood restraint. Or sheep, says David.
Once you are strapped in, you dialogue with David whose disembodied head then appears at the other end of a white corridor, a bit like in a near-death experience, like so: 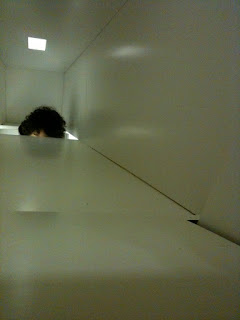 I got into a lot of trouble for taking this picture. NO HANDS ALLOWED. This was important. Thankfully David also needed to scratch his nose, so we agreed we were even.
You look at each other's disembodied heads down the white tube and dialogue.
I was terribly bad at the dialogue part. There may have been some giggling. But it was even worse when I tried to be serious. It was the kind of conversation that probably really works in German. Shame I don't speak any German.
"So, um, is this Space Without History supposed to be, like an absence? Or does it have a positive existence?'
David sighed.
"I am very tired. I have been talking for hours now. And I did not sleep for many many days" .
"Oh, sorry. Of course. Shall I get out?"
I felt a bit bad, like I had broken him. Said the wrong thing and broken everything.
"What is your accent?"
"I don't think I have one. It's neutral".
"No it isn't!"
"Oh. Then it's northern, perhaps"
"Can you do Manchester accent?"
"No. Erm. All right our kid? Oh, no, that's Scouse isn't it?"
"'All right our kid?' Ha. Now I let you out".
At one point a small dog was sick on the floor. 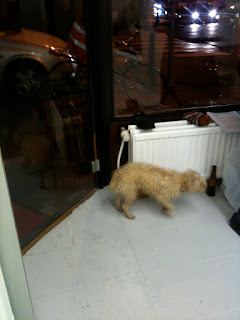 This was not part of the Space Without History.
If you are in Brussels you should really REALLY go. Seriously, go.
It's here and David is there for the next 2 weeks. Go and sit in the box and then tell me about it.
And yes, I have now created a history of the Space Without History, thereby confirming my status as conceptual art barbarian. Tsk.
Posted by Waffle at 12:10

Do I have to go? Please, no ... I will knit you a soft sweater from discarded Scottish Terrier fur if you don't make me.

I loved this, you made my morning. And sitting in my kitchen in Boston I feel no pressure to experience it for myself, I'll just live it through your eyes.

I had a bit of an anxiety attack thinking of my neck being restrained, so I won't be travelling to Belgium to see this thing. Maybe I'll go buy some purple suede boots instead. Purple suede boots are sort of ahistorical, right?

That's f***ing A that is, bloody ponsey artists, I love 'em. They are all mad, mad, mad and the world is a better place for it.
WEM x

p.s: So you literally had to get into a tunnel to come out into light?

I especially loved the line ''David wanted to create a Space without History. Obviously, this sounds better in German where it is one gigantic word `` (from Sarah who is learning German in Berlin!!!!)

can't come. but tonight we go to the ballet, so that should count for something.

p.s. i adore long composite german words. they are so sweetly and self-consciousl pompous.

p.p.s. i am, even as i write this, looking up symptoms for salmonella poisoning, just for the heck of it. i wonder if there's a german word for that!

This hits a little too close to home for me. This afternoon, I am off to see some mustachioed Brooklyn hipsters twitch repetitively. It's a work thing. Lucky me.
WV: Enomish, which I suspect this may be.

I wonder what the German word is for extremely FABULOUS boots.

Oooh, that sounds a bit too stressful for me. Not really the having my head wedged in a tube bit, more the speaking to someone bit...

This is genius! You should do more of these - find obscure art exhibitions to visit. Why not create your own art voyeur personality - wear something bleeding edge fashion forward (like the Issey Miyake black number with the science fiction shoulders you modelled the other day), big black sunglasses, red lipstick, really high heels, the weepette on a diamante lead and - most importantly - no wig. You could just swan in, dog in tow, drink wine (should any be proferred), peer through sunnies at said artwork for a bit and then leave, without saying a single word. Your magnificence would be awe-inspiring.

Now then, was it not just the other day that you were leaving us in no doubt as to your terminal maladroiteness (maladroitesse?) in social situations and how without the intervention of strong liquor you were more or less unable to function conversationally at even the most basic level? If so I am very very impressed by this excursion into what looks to me like pretty much the scariest head-to-head (no pun intended) social liaison I can possibly imagine. And as a resident of Manchester I can confirm that your attempt at the city's vernacular was passable, even if uninitended. Bravo!

Can't he just play with the box like everyone else? This reminds me that I am a complete philistine when it comes to modern art. And white boxes. Impressed by your staying power.

I was so SO hoping those rockin' purple boots were yours. They are awesome.

I will never, ever be cool enough to go to something like that and enjoy it. Ever. I am not sorry.

Conceptual art makes me feel stupid - it drives me mad to be honest!! So i admire your tenacity! Also i LOVE Mrs Jones' idea - i think that is perfect for you!

do you think that was the box the boots came in? I never know what to do with old shoe boxes, but you've given me an idea...

I love cancelled plans! And the space inside your head that no one can have. This is especially important if you are technically (legally) not allowed to exist.

Don't worry, the dog knew there was nothing pure to destroy with your history of non-history (doesn't that cover everything anyway?).

Sorry, as the Germans say, "I was just being serious."

Mad for it! (written in an shouty Mancunian way).

I too loved the German alloneword description. Hilarious.

Just realised I walked past this place yesterday... I thought it looked both terrifying and familiar - there was a stern looking woman inside so I decided to keep walking.