Scenes from a Brussels Saturday

Belgium is never going to bend over backwards to make you love it. I mean, I know that. It doesn't really 'do' customer service, it's not particularly beautiful, and they have a weird endive fetish. But today has been a stunner.
1. I go to the drycleaners. They return me my jacket like so: 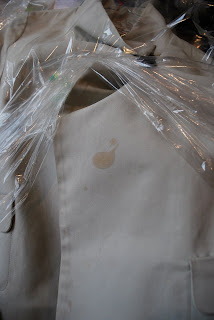 They are entirely unrepentant. "On a essayé, Madame" they say, we tried, their eyes challenging me to argue otherwise. They are on safe ground. I am a) British and b) PATHETIC. I pay. I enquire tentatively about a lost ticket, knowing that this will not end well for me.
"There's nothing we can do about that" says the girl.
"What, nothing at all? I've just lost hundreds of euros worth of sheets, you have no way at all of tracing them?"
"Yes".
"Oh. Ok".
2. After an inordinately long wait for my feckless friends at Taxi Bleu, we set off for Lashes's appointment with the knuckle-rapping handwriting gorgon. "Ah, Madame", says the taxi driver with ill-disguised satisfaction "Mais le bois est fermé!". OF COURSE IT IS. The fucking wood is always shut. They open it very occasionally in an arbitrary and mystifying fashion, perhaps something to do with phases of the moon, or messages from other galaxies. So we are late to the gorgon, who then takes it upon herself to tell me that I am insufficiently firm with Lashes. Oh, how I love unsolicited childrearing advice.
3. With misplaced optimism, I decide we will get a tram from the gorgon's into town. I realise the dubious wisdom of heading for Brussels's largest shopping centre on a rainy Saturday, but decide to go ahead, because by this point, going back home would be just as bad. We find a tram that purports to go there.
Forty minutes later we are in our fifth grey suburb.
"Where are we?" I mutter to myself, scanning the nine hundredth street full of grimy nineteenth century housing stock and kebab shops for any recognisable landmark.
"Petaouchnok" (a French nonsense word meaning 'in the arse end of nowhere') says Fingers, deadpan, not even looking up from Mario Carnage 8. He repeats this quietly to himself several times in the next hour.
4. We eventually disengorge into the sweaty underpass of "City 2" and spend a bewildering hour wandering around looking for various bits and pieces. Although all the bits and pieces are for them, the spawn are puzzled and overwhelmed by the seething mass of Belgiana, so everything takes five times longer than it should. Helpfully, Lashes leaves a plush panther in the furthest corner of the FNAC and we have to fight all the way back up the escalator of doom to get it. I top off the afternoon by queueing for ages in a shop behind a woman who is fulminating endlessly and with no apparent sense of discomfort about 'les noirs' and 'les turques'. Only exhaustion stops me kicking her in the shins.
5. We get another meandering, crowded, subterranean tram home. When it finally hits the surface it's raining, of course, and dark.
I remind myself several times how much I like Belgium.
And that my self-imposed January ban on travel is nearing an end.
Posted by Waffle at 22:51

I have to say I do think Bruges is very pretty. I detest all sorts of Saturday excursions - ikea, malls, shopping, grocers - it's all horrible and packed and usually smelly. no thank you.

1st - Why are you still there? But, if there is no alternative I advise a few weeks in Berlin to learn really bad manners (Berliners are rather proud of them, they call it 'honest'), then march back to Brussels with your new boots... (Just for the record, there are also nice, polite people in Berlin, some). Sabine x

Brilliant! So I'll keep doing Belgium vicariously through you and take comfort in that drycleaners are Mean worldwide.

Dear Belgian Waffle, you are so right. A dirty shirt and lost linens from the dry cleaner is something one comes to accept and almost expect in Belgium. I recently took an extended trip to Brussels to visit my friend who lives and works there. It is a city you love to hate. And miss when you are gone. I am crazy enough to miss it enough that I am planning another trip to that filthy weird city this summer. Keep posting, your blog is great!

What a depressing, negative view of Brussels. Why you stay here is beyond me.

No, anon, I love it for many many things and often talk about them. Just occasionally it bites you in the arse. As all cities do.

Loving your blog. I lived in Brussels for 9 years before moving to Middle East. I loved it, but can also totally relate to your frustrations! And when the Bois is open and the sun is out - what could be better?

Waffle - i have been here for soooo many years (After 12 I gave up counting), but you are dead right.

Its an arse. Full Stop. Trouble is i've always been a bit of an arse man - so you end up staying - and enjoy those trips to London Paris and Amsterdam just a little bit more.

I never enjoyed Brussels that much, preferred Ghent and Antwerp. But find me a big city that is any different. London is full of people taking pride in their humptiness.

When I read you, I fell less lonely about hating this rainy hole. Well, unfortunately for us, for some reasons we have to stay here...

But, but, but: no force on Earth will ever ever drag me to go shopping on City 2 on Saturday. You're mad!!! There, in that particular place, Belgians drive me so mad that I feel like getting out my kalashnikov and empty a cartridge.

I think you should go back to that dry cleaners and use some expletives. Reminds me of a time I got on the wrong bus and found myself in White Hart Lane.
WEM x

I thought about you today as I rode the tram that was BORROWED FROM BRUSSELS. http://bit.ly/62wFzs

Wacky, no? Here's hoping they also borrow Kiss and Ride.

OMG, I just found your blog through the bloggie awards and I've never laughed so hard reading a post. You are freakin' hilarious!
Can't wait to read the rest of your stuff.

all dry cleaners are pointless. you hand them your stained clothes. two days later they hand them back, covered in a plastic bag. you empty your bank account into their bank account. they laugh. you cry. do not go there, jaywalker. get the dog to lick the jacket twice over. it does a better job. and i have voted for the queen of all waffle.

I just found your blog today thanks to the Bloggies and after just reading the first entry, I'm already in love. I lived in Brussels for 5 months (Jan to May) in 2004. Granted it's not a long time, but long enough to know the (lack of) shopping in City 2, the (nonsense of the) trams, the greatness of waffles and blasted dreary/rainy weather that may be worse there than in London. Keep writting! You're now one of my bookmarks :) Many blessings!

since i am chronically unable to eat or drink without drooling/spilling/tossing (usually bright red coloured) foodstuffs all over my clothes, i typically look like a developmentally delayed ape with impaired proprioception. now i always have t-t-g in my purse and it gets rid of ALL THE STAINS IN THE UNIVERSE* so i can look like a cool, elegant chick (except for the cool and elegant part).

*except the greasy ones

Wow. That doesn't sound great at all.

Ouch! I am so so sorry about your sheets, I would've been livid really.