Oh man, the Bloggies are giving me acute performance anxiety (click that link and vote for me. I'll buy you a pony). You might not be able to tell with my general levels of sloppiness and indolence, but a secret perfectionist lurks within this slatternly exterior. I don't spend long writing blog posts, as a rule. It rarely tops an hour unless I'm uploading a shitload of photos. And I don't edit, generally spouting whatever I find sitting atop the fetid mass of thoughts in my brain, then waiting to see and correct typos once I press publish. But now? Yikes. I have nothing to say and what little I do deem acceptable I'm terrified of saying properly. There'm be strangers in our midst (I am saying that to myself in a Somerset village idiot accent). I don't feel I can just witter, but what else is there? You don't come here for incisive commentary on the news stories of the day, and thank nathan for that. I depend on my office mate for news stories, which makes for a somewhat idiosyncratic edit. Today's was largely to do with how the ostrich became flightless.
So. In the interests of continued regular posting, here I am, in abashed silence, trying to think what I can say. Hmm. Well, my house is very clean. You're glad you dropped by now, right? I have realised that in weeks without the children it's actually worth tidying because - watch out for the revelation here - the house. Stays. Tidy. Astonishing stuff. I come home in the evenings and there it all is, vast swathes of uncluttered floor (unless weepette has been having a particularly trying day). I'm oddly enthused by it, and have been renewing my fraught relationship with satan's pet. And the Swiffer. The Swiffer has taken on near mythical status for me since its appearance in Kiss and Ride. It's like a single person's talisman. Admittedly, I only found out yesterday how to make it longer, after my adoptive son shamed me into it. But I leave it draped around in the hope it will somehow make my how magically more Belgian and inspired.
Also, er, we went to the zoo yesterday. It was raining, and the spawn had to be cattle prodded to look up from Mario Carnage 8 for long enough to look at the animals, but it was An Outing. I felt more like a fit parent, having required them to leave the house. Lashes, within ten minutes of arrival, was done.
"Can we go now?"
"No!"
"We've seen the reptiles. Can we go?"
"NO. Do you know how much it costs to go to the zoo? FIFTY euros"
He was momentarily impressed by this.
"So we're not leaving until cost per animal viewed is below 5 euros"
There was momentary silence as he calculated, reflected, something. Fingers and I strode ahead, intent on seeing how mossy Kai Mook has become after exposure to a Belgian winter. (answer: actually not very. They probably scrub him with Ajax and wire wool before the zoo opens every day). Eventually he scuttled up behind me.
"I have an idea. Let's go to the aquarium".
His logic was irresistible. We went to the aquarium. Twenty minutes later we were heading out of the zoo.
Yeah, that's all I've got for you. Sorry. I will try better, longer, harder tomorrow. In the meantime, have a red arsed monkey, the only thing to raise much enthusiasm yesterday. 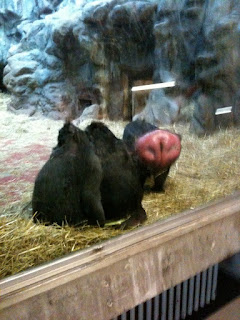 Oh! And a bonus shot of the WAFFLE VAN parked right outside the gulag. 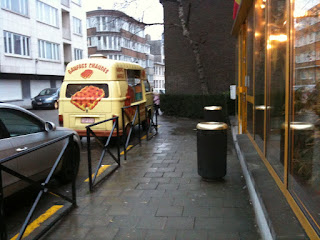 Welcome to Belgium!
Posted by Waffle at 21:01

Dude, your kid is smart!

I really want a waffle now.

Perhaps you should do biscuits with animal arses printed on them in that sugar paper and edible ink stuff? A whole new meaning to arse biscuits.

My English spellchecker doodah doesn't think arse is a word. It would if it were Scottish.

My thoughts are coming out in random sentences rather than anything coherent today.

I voted for you earlier. Where is my goddamn pony? And don't worry, I see no measurable difference in content between this post and all the previous ones. Maybe just a smidge less about drunkenly tottering around cobblestone streets in inappropriately high heels with a bum knee.

Ahh, you've helped me realise the reason for my slovernly malaise.
I spent a fair while living on my own, not super tidy. But tidy non the less, all the while dreaming of the perfect co-habiting life that had thus far eluded me and was presented as the thing to aspire to.
Now I find I have no desire to clear up things I haven't moved or dirtied. The days of always knowing where things are because you put them in the RIGHT place has long gone.
Enjoy your cleaning. Indeed, enjoy having your own bedroom and bed and.....
Because it won't last forever :)

I reluctantly did not buy a Swiffer this weekend, even though I really wanted one. Too much guilt about Throwing Things Away. I could just haul the vac up from the basement. I always wanted to live in a house with stairs. Now I realize the folly of that. Stairs are hard, especially for the lazy. You are luck to have a single floor and a Swiffer.

You should move to Chester and go on the bus to Cheshire Oaks. It goes past Chester Zoo and you get a free look at the rhino every time as you can see into the enclosure from the car park.

The delicious waffle van! That monkey butt is crazy!

Just de-lurking to tell you I voted for you. Good luck!

Are you up for a challenge? I'll bet if you could finally manage to take and post a photo of Stalin, you'd win the Bloggies fo sho. And, you have been promising for quite a long time now...

Did you not take any new photos of Kai Mook?

Put me in with the people who don't think the performance anxiety is showing (well, except when you confess). You are just a delightfully random as ever.

PS Do you have Swiffer Wet in Belgium? Does away with the need for a mop for ever. Awesome.

Relax, we're all still here. So you still perform.

you need to get it through your scone (yes pun intended) that we slattern readers love waffle. rest easy. 10:1 you win! no pressure.

Also emerging from the lurky gloom so let you know I voted for you.

Isn't it good to know that it's the children that are messy and not you? I always knew you were a profoundly good housewife.

Don't worry about awards - your posts are as disjointed as usual so (near) fame hasn't spoilt you yet.

I just have to spoil your fun and be tedious and tell you about Swiffer. There is some hyper dangerous chemical in the wipes - dogs and cats lick their paws and pick up traces of Swiffer poison. This causes liver cancer or something equally awful, so be careful. Can't remember the details as I was sent an email about it ages ago, but I'm sure if you google it (if you are having a sad day) you will find the info. Sorry to be so dull.

Don't worry about Swiffers and pets -- it's not true! Victory for lazy housekeepers everywhere.

I voted for you. Ah, for just one week to whip my house into order and have it...STAY that way a few days. Enjoy!

Thank god for that. I am not abandoning my Swiffer. Nu-uh.

And yes, Redfox. € 50 for one adult and two children. But a baby elephant is beyond rubies.

50 euros?! Your zoo is expensive! Ours is like 8 for an adult. Yours probably has more animals though...

Lashes is quite smart! thousands of fish, hey presto! value for cost accomplished! (he seems to take after the CFO it would seem??