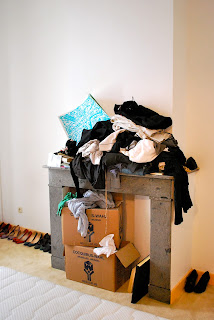 Someone was keen to see the pile of clothes on the mantelpiece. I do have other plans for today, but in the meantime, here it is. City Road! I wish I could do that inept annotating you are so fond of, but I don't know how on a Mac - if you show me how, more fugly annotated photo posts will follow.
If it were annotated I could point out:
1. An apparently seminal 3 volume set of Colloquies on the Enlightenment next to the large black photo album. Never read, from dark, history past that must be buried. A present from my mother's gay first husband.
2. The mattress that is taking up most of the room, but that is too heavy for me to even begin to think about moving it up to the spare room, and that I was too pathetic to ask the delivery guys to move for me. Planning on coming to visit? Hope you have your Health & Safety Lifting Certificate (bend those knees).
3. The woodcut print of London, and the one of Paris hiding behind it that are entirely India's fault. India is ruining women everywhere with her blog of outrageously desirable trifles. They are joining the already extensive collection of unframed stuff placed on high shelves to avoid dog damage. Other hard to spot items up there:
- several kilometres of Shinzi Katoh ribbon;
- an ineffectual anti-moth ball made from, I think, coffee beans;
- a photo of 'crazy era' me playing 'aeroplane' with Fingers, not having learned my lesson when the CFO dislocated Lashes's elbow doing the same;
- a lovely green clutch bag from Mimi in Cheshire Street that has lain untouched since it was used to stash/transport petits fours home from MF's beautiful Claridges wedding (2005? BMF?).
4. The top box is labelled, optimistically, 'useful clothes' (the bottom one, more idiosyncratically, says 'dad's keys are in here'). However useful they may be, they have not merited unpacking yet. Ha! Not so fucking useful now, are you?
5. Staining around the base of the mantlepiece where the stupid bastard dog decided to pee on my brand new fucking carpet. And still he lives!
Wow, this is boring. Sorry. Back later with thoughts around the theme 'what the fuck goes on in my children's heads'.
PS: M would like you also to note that my removal company was called "Coquibus". Thank you.
Posted by Waffle at 15:11

As the fellow owner of a boydog with inconsistent bladder control (and/or territorial urges he expresses through urine), all I can say is MOVE THOSE SHOES!

You know he'll target your favorites because they'll smell the most of you. It's like a grubby valentine or a slug in the arm in third grade.

...your mother's first husband was gay?

can I just say: Harris tweed satchels on India's page - Harris Tweed, didn't I say Harris Tweed would be big in 2010, I'm SO fashion baby!

But this is a work of art - you are the new Christian Boltanski!

that's positively gravity defying. i am most impressed. it's very chic, too, like tall food in fancy restaurants.

LOL glad you posted this photo as when I read about the "mantle" yesterday, I did wonder how big it could be to hold all that you mentioned. In reality it is not that big at all, you just have amazing balancing skills. More photos please, it never fails to make me feel slightly better about my own closet :)

I have an identical situation on top of my chest of drawers. The longed-for dressing room in the new house is all kinds of awkward and is at the moment just a room with piles of stuff in it. So I feel guilty as well as messy, spoiled and lazy.

That is some amazing pileage. I can tell that you have done pushing stuff up so that it's closer to the wall. It much resembles our washing pile, which instead of being in the two bags for it in by the living room, is piled up in a moving box, against our chest of drawers.

The green bag is beautiful, and also India Knight has made me buy lots of things I can't actually afford.

Oh! Where did your nice red grown-up shoes come from?

Reading your organizational style as tea leaves of a sort, I can only deduce that you are jaw-droppingly intelligent and an extremely fun character.

Reader requests - aww, it's like Wogan in here today! Thank you very muchly, although doubtless this will only lead to further demands (REQUESTS, I meant, honest).

The pile is all I could ever have imagined, and oh so much more.
Your talents obviously know no bounds. Do you have some ninja way of snake-charming an item from the bottom of the pile without causing it to topple? Clothing jenga.

I see no bag. This upsets me. Slightly consoled by seeing that you seem to have plunger on the far right. Ever practical.

I'm really impressed! My pile is on the back of the sofa. But it's not as good as yours. Will try harder.
I also have a big overflowing Ikea bag of laundry hidden behind the sofa. But my excuse is that my pitiful washing machine only takes about half a kilo of stuff at a time and I'm too much of a cheapskate to do more than one or two washes a week (and don't have space to hang things).

Seriously how do you balance it so well? They should teach that in schools.

i like your shoes and i admire the orderly line...no piling at all.

Monk - the plunger is the special funnel for my BOX O' FIRE TM. Just out of shot is a gigantic fire hazard in the shape of mountains of fuel. Lovely.

Ha! I LOVE that that is your fire extinguisher. Or fire controller. Or whatever. A Mooncup!

Nooooo, Monk. I use it to put the fuel INTO the fire. I have a dwarf extinguisher to deal with unwanted blazes. Now you've called it a mooncup I'm not sure I like it any more.