My delighful elder son decided to do portraits of us all today. Just, as monsters. 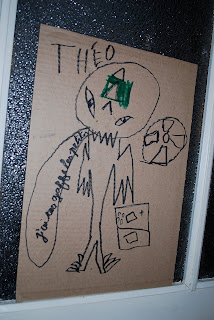 First, himself. He was insistent he needed the atomic energy symbol. And his Nintendo, of course. 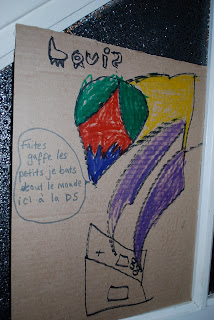 Next, his younger brother. This one makes me laugh.
"Why doesn't he have any eyes, Lashes?"
"He's a mante religieuse (praying mantis). The female eats the male after they make babies". Oh yes, that would explain it. ?
A praying mantis with a Nintendo DS. Of course. 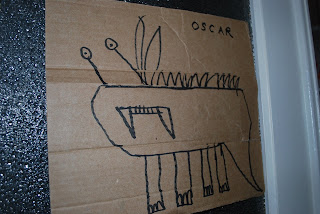 This one is largely self-explanatory, and I thought, rather charming. I wonder if the weepette would be easier to love with fangs like that? (dog welfare watchers will be glad to hear has been some degree of rapprochement between weepette and myself today, thanks to the absence of furtive pools of wee all over the house). 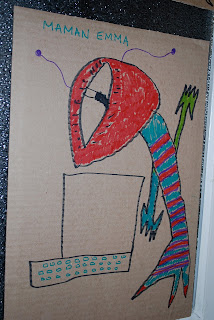 And here I am, one eyed, red clawed, permanently attached to my laptop. I think this is rather a flattering portrait. I didn't get a catchphrase, for some reason and it's probably a mercy. If I had I imagine it would have been either "give me two minutes" or "JESUS!".
They were lovely this weekend, despite the punishing weather and my crappy, incapacitated leg and general lack of zen acceptance of everything. For the last hour or so, we have been lying in my bed and they have been holding their warm, slightly sticky fingers over my eyes for sections of 'Up' they deemed unsuitable for me. It was really, really lovely.
Posted by Waffle at 21:07

Great portraits!
I think he shows a lot of artistic ability. I especially love the praying mantis, beautifully rendered.

that striped number you're wearing in the portrait is something you actually have in your wardrobe? or artistic imagination?! great portraits!

Ah! Coincidence. The Leadbetter household has viewed 'Up' today too (many times, by popular request. I am becoming inured to the sad bit at the start, and no longer cry and cry and cry at it. Now I just cry a bit). Also, there has been creative endeavour by my elder son. Astonishing.

I adore those sort of images. Am particularly fond of one my then 5 year old did of me in a cablecar in Barcelona... enjoy!!!!

My daughter fast-forwards over the bits she doesn't want to see in Up (the mailbox scene and one segment featuring a chase).

Wonderful portraits -- love the praying mantis. Why weren't you drawn as a waffle?

i do perceiveth a strong Ben 10 influence....your portrait in particular reminds me of one of the more superior aliens.... I'm afraid I can't remember its name. it'll come to me.

Trefusis Minor told me today that it was useless me trying to get him to be a better artist because he was going to be an inventor and everyone knows they don't paint. Au contraire, mon petit chevalier, I said, au contraire, all the very best inventors draw & paint and went off at length about Leonardo Da Vinci only for him to disappear at about the moment I said 'Leona....'

Hello, hello, hello - that's 'rapprochement between the weepette and ME' - and three points off your preposition licence, young lady...

grammar police, wanna hook up? i think i love you.

waffle, you look quite fetching in the striped number, and i see you have taken the time to paint your claws. well done.

The last bit sounds heavenly. And your portrait is the best by far.

OH GOD the Grammar Police. I'd blame the drugs, but it's probably just generic stupidity. Assume I am self-flagellating with Le Bon Usage in my cellar right now.

Hallo! Happy New Year! Am a bit late, aren't I? Sorry about that.

I love the portraits, especially yours (nice dress, and impeccably precise colouring-in) and in a weird coincidence, my two eldest nephews are called what your boys are called. Lovely names btw.

Love the portraits. I think you should use yours for all your professional needs.

Dear Grammar Police: shouldn't it be 'the weepette and I'?
ps does your son take commissions? My passport photo is looking a little outdated.

Jesus? I didn't know you were a practising Christian.

no, pinolona, grammar police is right. "between the weepette and i" might be commonly spoken but it is dead wrong. as is "the gift is from john and i" because both "between" and "from" use the object and not the subject.

an easy trick my high school teacher taught me was to remove the other person (i.e. you wouldn't say "the gift is from i," would you?) to see which pronoun was proper. of course this doesn't help with the weepette because 1. "between" always uses two objects and 2. it is a dog and doesn't understand grammar.

sorry about that. if i didn't say it out loud my head was going to blow up and make a mess.

And j'adore your red shoes, JW, even in cartoon version... Tres chic, even your darling son sees it! x

gah I can't escape the Polish grammar police... I KNEW there would be some reason for it being 'me' and not 'I'.
In that case: language evolves and grammar is descriptive and not prescriptive :)

i fear my tendencies stem from the fact that i learned english from the outside in, instead of, like most native speakers, from the inside out. add to that an english degree and what you have is terror. i manage to keep my mouth shut most of the time but there is much gnashing of teeth and rending of garments going on inside my head.

however, if it makes you feel any better, my polish grammar is gut level only and i can explain nothing. most of the time it feel like shooting in the dark, a dangerous hobby indeed.

jaywalker, i misread your comment as "le bon sausage" and had an instant vision of a little bdsm/deli happening in your cellar. might be a good business venture - catering to both the hungry and those requiring some light disciplining with cured meats.

Those are brilliant. He draws better than I do!