Shut up about the biscuits already

If this weekend has proved anything, it is that I am not cut out for retail. Some of my handicaps include: lack of common sense, non-existent basic arithmetic, poor forward planning and an ill-advised indifference to profit margins which will lead me to debtors prison before you can say "yer FIRED". I'm an ideas person. Or rather, I'm an incompetent and lazy person. Whatever.
For much of the day before, and the whole of the day of, Craftacular, I found myself dogged by an internal monologue. The monologue was voiced by the person who does the voice overs for The Apprentice:
"Meanwhile, back at Team Stupid headquarters, Emma is having some difficulties with the boxes" (image of me sitting keening on Papa Waffle's floor surrounded by piles of biscuits and cardboard and pritt stick)
"The team have spent more on receipt books and glue at Rymans than they intend to charge for a box of biscuits" (image of me faffing around with stationery as M rolls her eyes)
"Emma seems unsure how many biscuits she has made" (images of various people quizzing me and me looking shifty and pulling numbers out of my head unconvincingly)
"The Cruel biscuits are not proving a hit with some of the younger visitors to the fair" (image of hurt, bewildered infants being shepherded away from our table by their scandalised parents)
"Team Stupid are having a lull" (image of M and I sitting slumped at our table mid-afternoon, arms crossed, sulky, covered in cake crumbs. M has written "Fuck Off" on the Etch a Sketch toy on my phone and left it on the table. Something, indeed, like these images: 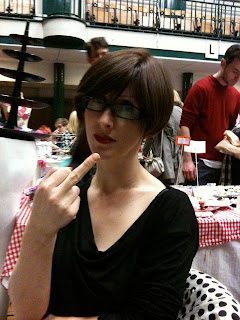 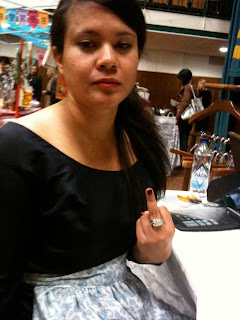 We so pretty! You should have seen us singing along, badly, with all the wrong words, to Brigitte Bardot's "Je n'ai besoin de personne en Harley Davidson" or talking to each other in pig German. I note that my face is looking very fat and puffy from a diet of nothing but fucked up broken biscuits for approximately a week. Delightful.)
"Emma's sales techniques leave something to be desired" (images of M and The City Road kicking me in the shins when I feebly sell single biscuits for 50p instead of £1 and give people the secret German Amazon address to buy their own biscuit stamping kits thereby cannibalising my own market)
Occasionally, the monologue would be accompanied by a hallucination of an apoplectically furious and scornful Alan Sugar.
"Did ya even work aht yer facking margins? Well, DIDYA???"
(no suralun, sir, but we gave 100000%, grovel, bluster, slither out of blame, etc etc until despatched mercilessly)
At the end of the long, looooong day, much of which was spent concerned about how to transport a clothes rail the size of a ten year old, and laughing in semi-hysteria, I found myself trying to explain this to a taxi driver. This was distinctly not my finest hour, which he then he compounded by making me explain the principle of the primacy of EU law. Drunk and exhausted and smelling like a tandoori lamb chop.
Anyway, screw that, here are a couple of extra pictures of Craftacular weirdness.
1. I know you can't really see her properly, but she was wearing red tights and a red turtle neck under black sequinned hot pants, Margot Fonteyn head plaits and a necklace made of giant pine cones. AWESOME. 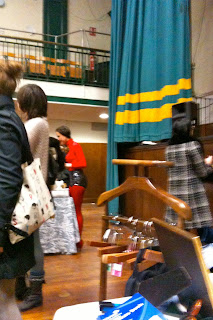 2. I had to pretend to be taking a photo of City Road, but look past him at SKI SUIT WOMAN. I should say that the hall was boiling, a fug of crafter sweat and tears and cake, but ski suit/furry hat woman, who was entirely dedicated to her total look, did not even flinch. 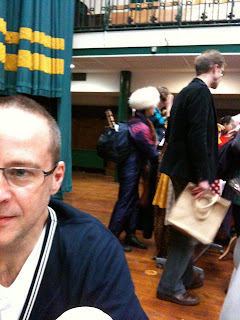 3. Not an outfit, but the magnificently weird taxidermy stall. Look at the lamb in a box! Wee Birdy has better pictures here. 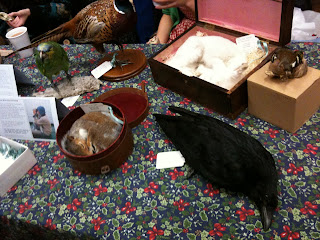 These were only edited highlights. Damn, how I love East London. I went to Poundland for safety pins in 5 inch spike heels, an asymmetric batwing jersey dress and a floral apron with "shite" embroidered on it at half ten in the morning and noone batted an eyelid. I don't have a photo, but there were also bouncers on the door, just in case the crafters turned violent and started laying into one another with their crochet hooks and pinking shears, which tickled me hugely.
I am going to lie down somewhere very dark now, where there are only savoury foods. I promise not to mention biscuits for a very very long time.
Posted by Waffle at 20:20

I think your version of fat and puffy differs hugely to mine, you mad woman.
Etch a sketch? I neeeeeeeed an iphone.
Next time, I'll do your number crunching. I loves profit, i does.
Fran

Who knew M. is such a hottie? You made it through, girls, and that is accomplishment in itself. Maybe some margins can be sorted out some other time.

Meanwhile, I am contemplating baking some "Santa's Not Real" biscuits for my 5-year-old darling nephew, just to spite his mother who informed me on Saturday that my Mom, brother (not the one she's married to) and I are NOT INVITED to Christmas dinner. WTF?

Ah, the joys of Christmas cookie baking... I leave it all to the - English speaking - daughter with German Amazonian manners.

What was that about bouncers on the door???
Mind you, you should have seen the queue round the corner before it opened, worth it for your stall alone and the lamb-in-a-box and those kooky crafter’s fab outfits. Craft IS the new black.

I'm leaving a box of you Tourettes at a Park Lane hotel as a welcome gift for a friend.

Simon - ha! Lamb in a box and coyote print were my favourites. Did you see the coyote print? It wasn't my favourite for aesthetic reasons, but whenever wwe went to look at it, we sold something. It was very odd, and read "do not fear being eaten by a coyote because inside every coyote is a comfy mattress where you can sit and wait for rescue".

Also, thank you, you are too kind I hope your friend likes their insulting present...

Fran - I really wish you had been there to kick me around a bit. M usually does, but she was exhausted from all the knitting.

AQ - Is she not amazingly foxy? She IS. She is the sexy half of the brain. FACT.

I agree with Fran - no fat puffy face.

Could the ski woman possibly have been Belgian? I'd never seen so many cold people in one country before moving here. I can only assume the hall wasn't as hot as the sun/metro.

i was gutted to have missed the Xmas Craftacular (summer one was ace) and only because, stupidly, i agreed to take a visiting out of towner INTO THE WEST END THE WEEK BEFORE CHRISTMAS...and got lost in a sea of rabid shoppers - and now i'm doubly gutted cos i woulda loved to get my mitts on some of your biccies and your post just made me spit my tea out in a fit of laughter. thanks for that at least!

Bouncers indeed, seemingly left over from York Hall's glory days as a boxing venue, if not THE boxing venue of the East End.

Lamb in a Box was my highlight also, after Cruel Tea of course. Emma neglects to mention she sold EVERY LAST CRUMB long before the end of the day.

Also enjoyed the disproving looks Cruel Tea's concept gained from some folks who obviously had mistaken the event for a standard WI-type affair.

Well done you two, looking divine and pitching the brand exactly at the point where neu-craft meets Situationism.

The bowling ball I seem to have swallowed recently would like to have words with your 'fat and puffy'. Both you and M. have definitely mastered just the right go-thither looks to complement your crafty, foxy charms. Am delighted to learn you sold every crumb.

On a completely unrelated matter, I thought you might be interested in some sad capybara news from Canada:

why the HELL did i get rid of my black sequined hot pants? WHYYYYYY?

I remember once opening a carrier bag that my husband had left lying around for several weeks and leaping back in shock because I thought it contained a dead black cat. Turned out to be a fur stole he had been asked to auction. It wasn't too long after that that he decided to specialise in porcelain. I feel that opening a nice little round box and finding a dead squirrel in it would be just as disconcerting.

I SAW THE CRAZY HOTPANTS/PINECONES WOMAN! At first I thought she was some kind of act, but then I realised no, she's just dressed like that.

I love East London too. Heart.

But I hasten to add that they *were* extremely tasty *and* entertaining. Which is a combination one does not usually find in a biscuit.

Therefore you are a genius. xx

I still can't believe I missed it. I could have bought a batch and put them to my much tamer version of Christmas baking and leave the guys to themselves. Cookie wrestling, yay!

Topshop are to blame for selling hundreds of pairs of sequin hotpants and having pictures of models wearing them everywhere. I was nearly persuaded for a second myself.
Also I want that squirrel in a box, did it cost a fortune?

PS Put some more stuff on your etsy site. I will buy it! I reckon I can manage internet shopping, even with a hangover.

How much for the dead raven?

And btw, Emma, you give the finger better than anyone.