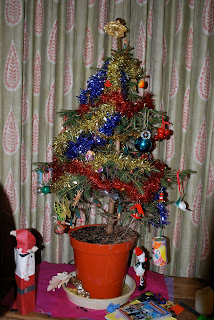 The Most Vulgar Christmas Tree in York, as voted by the Yorkshire Evening Press Readers Cats Arse Face Panel
I'm having terrible problems with impatience at the moment. Not in the sense of being short-tempered, which I am, but no more than usual. It's more, well, that I want things to happen. Mysterious, ill-defined things. Things, with a capital T that I couldn't explain if you asked me. I want to skip past the next few months. Fast forward. Get to somewhere a bit clearer. I swear, it's like being seventeen again, this separation business. I'm desperate to be further on, to have done more, finished with this phase. Everything seems to move glacially slowly to my sulky, teenage mind. All my little treats - and there are quite a few lined up, mercifully, in the next two weeks - seem so far away. The 23rd? AGES. 27th? Unbearably distant. New Year's Eve in Paris? A lifetime away. And will the trains even work? Uuuuurgh, imagine me in a teenage flounce of stupid, impotent despair.
Of course, at the same time I'm intensely lazy, so it's rather like having your feet on both the brake and the accelerator at the same time. Not that I would do that. But I can imagine it might, perhaps, have an untoward effect on major operating systems of the car, or person in question. Hypothetically. One might query the mechanical, er, emotional, integrity of someone who found themselves stifling sobs outside the Monk Bar Model Shop (spiritual home of all men in cagoules who like war) as they tried to explain the plot of The Nutcracker.
Being back in York doesn't help, because it's so intensely like being 17 again, slumping around the house irresponsibly and expecting to be waited on. I got a cup of tea in bed this morning! It must have been the first time since, oooh, the last time I spent Christmas here probably. I forget entirely how to be 35. The whole business reminds me of pining for boys who didn't know I existed or who had brutally chucked me, waiting for some indefinable 'life' to start and reading furiously, gloomily, eating 18000 mince pies and wearing ill-advised sequins and blue nail varnish. Of course, the 2009 version is more of a case of pining for lost opportunities, grinding my teeth and herding children. But the impatience is the same. I do not, it appears, have a zen bone in my body. I have no patience, no restraint, no faith that things happen when they should. I want them to happen NOW.
And just as it was when I was 17, there's nothing unbearable I have to get away from. Right now is actually pretty fine. The boys are remarkably sanguine about their new two homes life; they're sweet and ebullient and apparently confident that everything will be ok. I am really very happy too, if fraught and occasionally massively snappy. Moreover, an objective look back at the last year hardly suggests stasis or stagnation. Things have moved in all manner of ways, perhaps more than any single year previously. I wonder if partly, that's the root of my impatience? I'm desperate to keep the momentum up, and if it were possible to force things to happen through sheer flounciness, I would be well ahead of the game (it isn't. I've tried). As it is, I wish I could just accept a fallow period. A few weeks or months (years? God I hope not) when nothing very significant happens. Wiser people than me have tried to tell me how necessary it is, but I still bubble with impatience.
Of course, it's also partly that my mum is in a muddy field just up the road, and my magnificent, very poorly brother and his wife are taking his children to Lapland today before he starts yet another round of chemo. I can barely imagine how they've done it. That's a proper achievement.
Sometimes zen doesn't quite cut it. Sometimes there isn't enough time. And that's what keeps me up until stupid o'clock, plotting and wondering and getting frustrated.
Any thoughts? Or ideas for exceptionally absorbing activities to give my poor stumpy, ground away teeth a rest?

Oh, and look at these two, Team Snow: 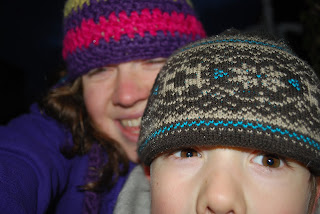 The Space Cadette sledged so much she made herself sick. You have to love that in a 25 year old, no?
Posted by Waffle at 00:19

Space Cadette deserves a place on the olympic team for that much dedication to sledging. We still have no snow. I am very jealous.

I wish I could tell you how to be patient, but I can't. I am majorly throwing toys out of the pram at my own belief that my life is moving through custard with wellingtons on. I will await your readers comments with interest and an eye to purloining any brilliant ideas myself.

My one fear is that I will be snowed in & miss the 23rd; my one sparkly bit of fun. LLGxx

My sympathies on the antsy adolescent agita.

Massive snowfall when one is already from home is the best snow, I think. You don't have to worry about getting to work through it, and if it gets ugly and frozen over when it's no longer fresh, you can leave it behind. You can flounce about in it to your heart's content or stay in with a book, and damn the consequences. Either way one has earned some chocolate. Perhaps the drinking kind, with a glug of something alcoholic to stave off the cold?

Dear Em - I think what you say is right, that it's the lull following a year of upheaval and turmoil, and you just can't cope with everything stopping for a bit. I know other people have said it before, and you'll ignore it anyway, but you should have a word with yourself, take a deep breath and just STOP for a moment. Be still. Enjoy the calm while it's here. You may have to just force yourself to do this. And then, when the New Year arrives and all the stuff about it bringing new beginnings, then you have to get off your arse and do something about your future - you have to make the first move because many things need a catalyst and sometimes you have to provide it. Alternatively, drink yourself into a stupor until the fun things happen on the 23rd & 27th. Also, props to the space cadette for knowing how to enjoy the weather. Me, I'm about to head off to South Wales to pick up ancient & doddery in-laws while trying not to get stuck in ice at Basingstoke. Which would be a whole new circle of hell, I think you'll agree.

Weirdly you'll look back on this patch with misty eyes. I always wonder why I am so shit all the time and yet 'ahh this time last year...' always seems like Munchkinland in the now.

....Remember that time when we were on the plane torso-crumplingly sobbing... and back when my legs refused to support my gasping carcus and all I ate was the duvet and I lost my sanity, job, friends and flat....aahhhh

Urgh, I feel your pain. Everything is ok over here. Actually, life is perfect. So let's sell the house, buy a ruin, live on a building site, start a new career, throw in a new baby (oh noooo, that's the one thing I still refrain from!) - in brief: shake up everything and start picking up the pieces again. If you should find the magic zen potion, please let me have a sip.
xx MM

Lord, give me the strength to change those things I can.

The serenity to accept those things I cannot change.

And the wisdom to hide the bodies REALLY well.

i think we periodically revisit the idiocy of adolescence in order to appreciate adulthood.

the zen bone is small and hard to find. i do believe we all have one, but it requires deep breathing exercises, quiet and the ability to look deeply within oneself within the usual cover of bullshit and supermodel facial expressions. i manage to find mine once every decade or so, make a bunch of promises about retaining this little glorious miracle, and then very promptly lose it again. lather, rinse, repeat.

as for the toothy stumps - consciously relax the jaw as you fall asleep and put your tongue to the roof of your mouth whenever stressed, this will make grinding very difficult. just a bit of mind-numbingly dull professional advice from a tooth-type person.

One day you will wake up and be happy, I promise,

What's this about the 23rd? A surprise birthday party for me? You shouldn't have! Oh... right...

I have been where you are. What? No. Not York. I have never been as far north as York. Okay, that's a lie. I've been both further north and further south, but sadly never to York.

However, I AM very happily divorced. And I remember those first few months only too well. They seem to go SO slowly and it is impossible to imagine ever feeling settled again. But you will.

Also, we women tend to feel all adolescent and questioning again in our mid-30s or so (our version of a mid-life crisis, methinks), regardless of marital status, so it could be the early onset of that.

My only advice to be to take some time to find out who you are, on your own, before you go galloping off with anyone or to anywhere new.

Mme Waffle, maker of the bestest biscuits and most genius of teacosies of all, I salute you.

As a divorcée of the June'09 vintage I assure you - as I did in dreadful semi-sarcasm at Craftacular - it gets a heck of a lot better. And soon at that. Best thing is to have plenty of "stuff" to occupy yourself - sparkly events and making rude biccies will do!

Fingers and Lashes are exuding the outward signs of your great parenting during separation. They are fine because you have given them the confidence to be fine. See what a SuperMum you are? I do.

Wading through treacle is happening in the short term. Nowadays I barely have time to catch my breath - so lay abed and drink tea as much as is humanly possible because it will be back to mania very VERY soon.

Feeling 17, but pining for lost opportunities. Brilliant! Have yourself a happy, little Christmas.

Sending good thoughts for you and your family, especially your brother. My dad beat cancer last year after a horrendous time with chemo so I hope it will be the same for him.

I know what you mean about wanting to fast-forward life. We've had a turbulent year too and I'd just like to know that things will be better. Not that they're bad now but there's definite room for improvement. Joyeux Noel

As a cheater your heart has failed, fooling me like the others, if I quickly realized it would certainly be more hurt

I hope the information we share is useful and can be the best solution to cure your illness ... amen