Julia has submitted this one: 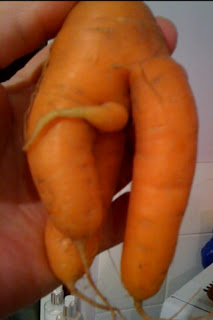 Which made me feel a little like a latterday Esther Rantzen.

The illustrious Non-Working Monkey and her veterinary pathologist have come up with "Timid Mute", a shy, lentil-eyed Jean Claude Van Damme of a tuber. 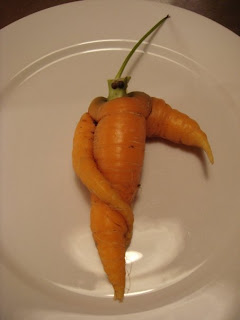 Presumably by now you will not be surprised to learn that Mr WithaY has not quite finished with vegetable crafting yet. This entry is entitled "Alien Spaceship". 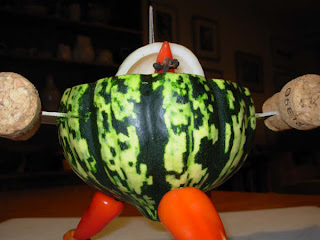 Lucy with a Y particularly wishes to draw your attention to the alien pilot's clove eyes. I would be happy never to see a clove again, personally but that is a very low probability event, as the CFO's mother has scattered them with gay abandon throughout every cupboard in the house in a futile attempt to discourage the moths. The moths just laugh, shrilly, chew up the cloves and crap out the remains, before turning back to the more important topic of how best to destroy the house. I suppose it would be handy if any of us got toothache. Toothache? Chew an alien eye! 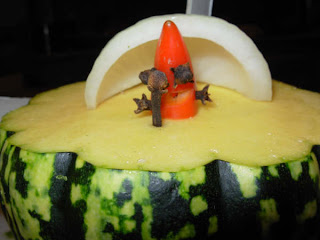 Here's a last one for luck. 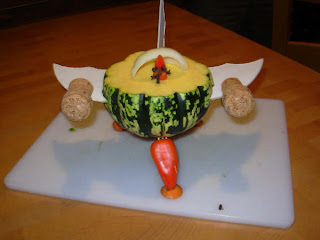 Still on a vegetable theme, the Non-Working Monkey has also submitted "Pumpkin Birth". 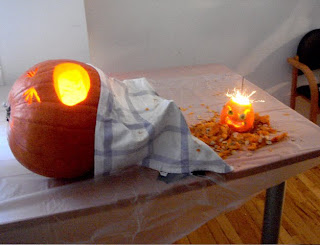 This piece takes the concept of a virtual village fête to its natural conclusion, since NWM did not make this (though her colleagues did), and it dates from last Halloween. No matter. It is fantastic.

I'll be back later. But, you know, ENTRIES CLOSE TOMORROW. This is your absolutely, totally last chance to win an awe-inspiring 2009 Fête prize. Probably.
Oh, and while I am chivvying, I should say who won that book that I can't quite put my hand on right now. I thought I would give it to Screamish, but it sounds like the last thing she needs is another book. So if Screamish doesn't want it (you have first refusal Screamish!) then I award the glittering suncream stained prize to Anonymous for the review of Sea of Poppies. Reveal yourself, anonymous and claim your prize. Go on, I'm feeling magnanimous, you can BOTH have a prize.
Posted by Waffle at 18:21

pumpkin birth...makes me want to hide...under bed....lucky i've already given birth twice or i'd be off to get the old snip snip after seeing that

I'm just too intimidated by te quality of the entries to join in - I just have to stand back and admire.

Love the pumpkin birth. That should win any village fete contest.

Pumpkin giving birth is brilliant! I may steal the idea this Halloween.

hey by the way who won the worst Ex survey? was it me? (i've been away, eating duck products in a field). I have other ones, equally as devastating...

Sorry Squeamish, Mrs Trefusis had a first boyfriend who chucked her to join the priesthood. But you were well up there with the best.

yairs, I can see that the competition was fierce...my REAL first love affair ended in a caravan park with fruit pickers and an ageing Elvis impersonator (i am only slightly exaggerating) but i'd forgotten about that until right this instant, and just as well

The Shy carrot is an absolute star! But the pumpkin birth is truly inspired.

I have hidden Mr WIthaY's vegetable carving implements away now. You may all relax till next year.

I adore the shy carrot. But pumpkin birth is also pretty fabulous.

I think I need to take a vegetable carving class before next year!

I have never won anything in my life (apart from a 3rd place in the Kinross Show for a picture of Princess "Gawd Rest Her Soul" Di made out of dried alphabetti spaghetti), but I must just add that Shy Carrot was actually grown AND harvested by the pathologist himself. Incroyable, mes amis, mais vrai.

Now you're just showing off, Monkey. Edith doesn't like a show off. Well, maybe she does? I'm going nowhere with this am I. Well done Pathologist anyway.