Fill the silence with salami capybaras

I seem to have slightly lost it, blog wise recently. A combination of things, possibly including some or all of the following:

1. Lots of the people who I might be entertainingly rude about now read my blog (Hi! Have fun trying to guess if I'm talking about you! Clue: if we haven't met, it's probably not you). Noone has come to see us for ages (they are scared of the apocalypse, the pussies), so I can't be rude about them either. Papa Waffle is in fact coming this week, but has brilliantly timed his visit so that he is in Brussels at PRECISELY the time I am in London. We will cross under the sea as far as I can elicit. We are consummate communicators in our family. I mean me, mainly. He doesn't have a morbid fear of the telephone.

2. I am writing other stuff and my brain is therefore empty, wrung out, and cannibalising itself. The last few brain cells are fighting it out to the death like some kind of neurological reality show.

3. I have gone the full circuit of my self-absorbed hamster wheel of topics and have nothing more to say. Moreover since a particularly helpful acquaintance said I was almost certain to repeat myself soon, I am insanely determined not to. MUST NOT REPEAT. This combined with my compulsion to please everyone all the time is highly restrictive. I am basically sitting and waiting for something sufficiently entertaining to happen. You can wait a loooooong time for that in Belgium.

4. I am having some kind of second adolescence and am permanently drunk or hungover or in a teenage state of barely supressed frustration and impatience about nothing in particular. See brain cells, at 2 above.

5. Most of my preoccupations currently turn around apocalypse related topics, and some twisted - and long overdue - sense of propriety appears to have taken residence in my head and prevents me from airing them here, at least until the children know what's going on. Which won't be for a while, I think, since Actual Tangible Things aren't scheduled to happen until the back end of the year. So that leaves me with, as I see it, two options; allude to things obliquely in a hugely irritating and coy fashion, or ignore them completely and do the blog equivalent of talking about the weather. Neither appeals greatly.

All this combines to make for very low rent blogging. Look on the bright side though - reread that list and imagine what it looks like on the inside of my head right now. You wouldn't want to be there, I'm guaranteeing you.

Thankfully for me, and for you, the fête entries continue to overwhelm me with their brilliance. 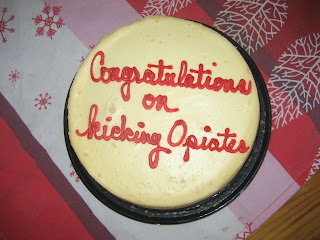 It's like a ten step cheesecake! Well done Anonymous. We're all here applauding you. 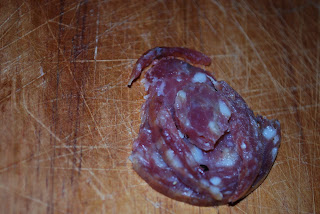 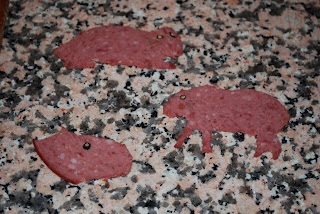 "The World and his Wife" 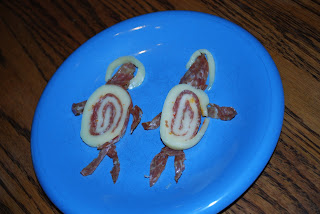 Commenting on her submissions, Ginger says

As an artist, I was especially excited to work in this new medium. I found it both challenging and rewarding, since I could eat the scraps, not something I generally get to do when working with more traditional media. Many who view these pieces will wonder at the artist's inspiration. Like Michelangelo, I feel the finished sculpture is just waiting to be released, I just help the form break free, and lick my fingers now and then. Enjoy!

Also, because Ginger is awesome and not lazy like SOME PEOPLE (no, not you Bevchen), she has even done an office supply entry. Yes. 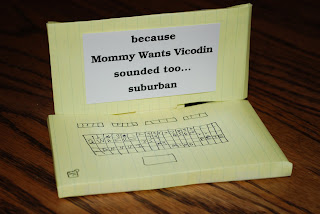 I think it's a computer made from post it notes. Possibly.

Then, as if that weren't enough brilliance, Titian Red and Titian Red's husband The Silent One have been busy too.

I have forgotten what this is supposed to be. A racing car? Remind me, Titian. I like the driver's little googles though. 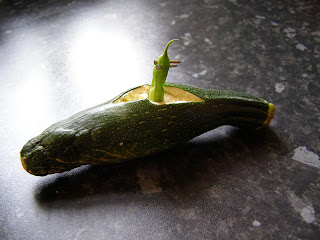 This is a photo of a dead dog wearing antlers. But I don't see why it can't join in. The Belgian Waffle Village Fête is an equal opportunity competition and welcomes dead domestic animals. 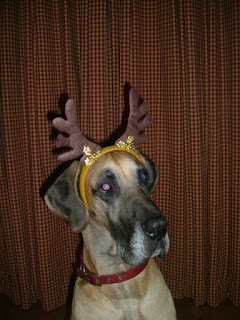 Actually, next year can we have a taxidermy class?

So there we have it. I have sod all to say, but there are lots of weird handicrafts available to fill the hole. If you can think of anything that you would like me to talk about then stick it in the comments. I am entirely, pathologically, open to suggestion.
Posted by Waffle at 21:24

The courgette is John Hurt, can't you tell ?The french bean is the alien bursting out of his stomach - in Harrogate no one can hear you scream

Lord those fête entries are utterly killing. They're GENIUS. They should have a gallery of their own. The art from food scraps, especially the salami capybaras and the world & his wife-hell, even salami madonna and child are better by far than anything chris offili ever did with elephant dung. I'd recommend Milanese salami for spiritual works, though. The smaller speckle of White fat offers a touching reference to the breaking of the Host. Dead Christmas Dog, anonymous cake and vicodin post-it computer are more heartbreaking than Tracy emin's most touching works, and as for vegetable Alien: it's so post-modern it redefines the term
*awed*

I saw the movie Alien re-enacted in the zucchini and bean.

Don't feel bad Waffle...it wasn't on my list of "must sees" when it came out either (many years ago) but that darn movie made so much money Hollywood made like a zillion sequels. It could not be avoided, here in the States, to have seen in one fashion or another the alien bursting from the guy's stomach.

I have been known to "allude to things" on my blog also. I feel terrible when it happens AND I have a commentor who is not shy about calling me down on it.

I hope whatever is troubling you finds a way to resolve itself with your happiness coming out on top.

I love the fete. Wish I weren't so lazy...maybe next year.

I don't want to let this go by unremarked: "I am writing other stuff" = superb! Felicitations.

Fuck! Sorry Titian. I am a moron. I will take a picture of the thing it reminds me of which will go some way to explaining why my first thought isn't John Hurt when I see the courgette/bean combo.

I don't think you have to worry about 3. because most of us (and I speak only for myself here) suffer so terribly from 2. that we probably won't notice. We'll just happily read.

But I know how it feels to have an absorbing life event like the impending apocolypse looming but about which you feel you can't write. Very inhibiting.

On the bright side, apocolypses (apocolii?) are far more horrid in the anticipation than in the execution (although it may feel like one at times) and in retrospect, are downright entertaining. You'll dine on the stories for years, if you play your cards right (i.e. remember each and every 'offence' by the other party and relate it in an entertaining fashion whilst appearing faultless yourself). It's an art form. But it doesn't lend itself well to expression in salami. Expression whilst CONSUMING salami, yes, but that's another story for another time.

I do sympathise, I'd give my eye teeth for my family not to read my blog.

Nice blog by the way!

Did the dog die of embarrassment?


(Sorry things are not so well with you. I'm looking forward to the BlogMuse's return. By the way, did I ever mention that your children are really, really beautiful?)

Titian I couldn't tell but I liked thinking it was a little green man in green courgette boat... Cany only repeat (repetition being a theme du jour) entries are genius. Love the 10 step cheesecake & Michelangelo references as particular highlights. Am too overawed to enter but shall look foward to voting if am not to late.

Are you sure you want blog ideas? Really? You might regret this. Let's go down the absurdist route:
--Fashion show of the CFOs new wardrobe, and a poll so we can vote on which outfit is most likely to bring him chick success (in this way he can see that we just want him to be happy, and look! We're helping!)
--A trip to the Mexican Embassy to track down the dashing young swain late of the parc du caca
--Surely there is still room to mine with weird crushes? How about an entry on what makes Stalin so entrancing?

As for the food art, let's just say I wouldn't want to be Edith Zimmermann.

Hahaha!!! Your food shapes are great! Where do you find the time!?!

Even when you have nothing to say, you say it with style! And it bears repeating, so don't have any worries on that score.

Is the antlered dog really dead? Looks like a bad case of cataract to me; distressing but not, as far as I am aware, fatal. Unless it should chase a stick over a cliff or something. (I should add the disclaimer that vetinary ophthalmology is not my speciality).

So, you're getting on with the Belgian erotica at last, then? Excellent.

CFO fashion show? Fantastic idea...and I think I know who suggested it. Hello, my sister. Where is your chocolate popsicle fete entry, by the way? Hello, SALAMI????

The salami and courgette art is so amazing that I realise I must withdraw my poor gingerbread house from contention - because at the time it was made it was seriously meant, if you see what I mean. It doesn't really belong in the inspired insanity that is the Waffle Fete.

I now realise that to compete seriously in the Waffle Fete one has to produce something much more subversive...time to master a new art form.

Tomorrow is market day in Ayvalik, and I will go and brood amongst the crnucopia of fruit of vegetables, seeking Waffle-appropriate articistic inspiration.

so, here i thought the bean was riding a landspeeder across the desert landscape of Tatooine... honest! (such a geek!)

Oh Layla, if I had even the slightest knowledge of what the chocolate popsicle looks like, believe me I'd be carving in fudge as we speak. But no, instead I am asking to delay confessional because I have had a such a moralistic summer. Total depravity FAIL.

You may repeat yourself as much as you like -I probably wasn't here the first time round anyway. And even if I was you never fail to entertain. Besides, I've just written a blog complaining about the fact that I now won't be seeing my boyfriend until Friday. And it wasn't even an interesting whinge. The award for most boring blog goes to.... me I should imaginewell, it certainly isn't you!

The alien bursting out of stomach thing was lost on me as well. I've never seen alien though. If I had to guess I would have said it was an alien in a canoe.

Fortunately "dead dog" died after antlers, a sufficiently long time after for it not to be caused by shame. He was dressed to be a reindeer in junior school Christmas play. Cataracts are all my fault as I did not push the clever non ctaract button on the camera.

When I had a proper job (OK one of the proper jobs I once had) I used to recycle all kinds of proposals for stuff we should involve the business. No-one read them, so no-one noticed and I got paid all the same. It was oddly satisfying.