A poor excuse for a load of photos

Such a strange holiday. The spawn are enjoying it. 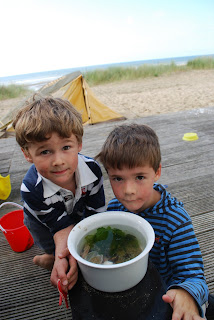 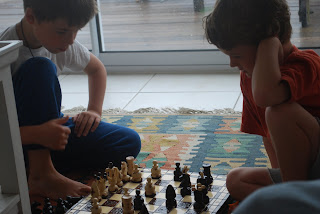 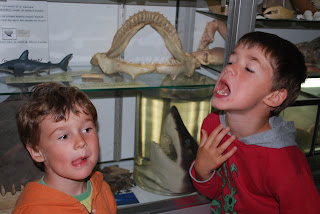 Each in their own way. 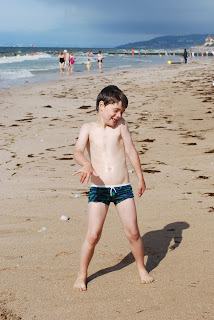 Techtonik on the beach, perhaps? Or would you like to clean and classify your cuttlefish by size? 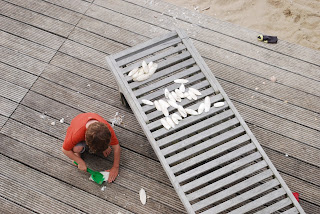 And breakages have been surprisingly limited. Lashes melted a Bulbasaur on a bedside lamp but that's about it. There's still time though.


The Trouville aquarium was a high point. I went ahead with the spawn while the CFO parked the car. The entrance appeared to be through the municipal mortuary. At the end of a dark, damp corridor lurked a unsmiling harridan in a sweatshirt guarding a selection of plastic keyrings. Whoever decided on the sweatshirt as the default uniform of choice in this type of attraction had decidedly not been watching French How to Look Good Naked. With an increasing sense of foreboding we paid €18,50 and entered the darkness.

Two minutes, four goldfish and a very bad tempered dwarf shark later, we appeared to have completed our circuit. It was like a marine version of the model railway museum at York Station, a single room with four buckets for children to stand on and a single lonely train going around in a figure of eight watched by a handful of tiny plastic figurines. I was particularly mystified by the profusion of cages of small rodents.


"Hamsters aren't very, uh, aquatic, are they?" I whispered to Lashes.

The harridan overheard me.

"It's to demonstrate what the SNAKES eat".

The snakes added a further minute to our trip.


"Bébé?" the CFO had just arrived and was just about to enter the grotto of doom.


"Noooon! Don't come in. Whatever you do STAY BACK"

Afterwards, the CFO said the note of panic in my voice was striking, reminiscent of a chivalrous farmhand who finds the badly beaten corpse of the tweed clad landlord in the stable block whilst accompanying a lady visitor and is keen to protect her from trauma in an episode of Midsomer Murders or similar. He also said his credit card was already in the machine and he had to snatch it out right beneath the nose of the thwarted harridan. I was very concerned that paying €7,50 to see two guppies and a cage full of guinea pigs would push him over the edge.

Instead he stayed outside and found blog material for me. When we emerged, two minutes later, he took my elbow and steered me over here: 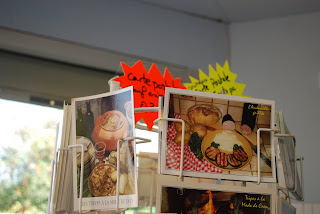 "Look closer. Make sure you get a good shot of the COBWEBS" 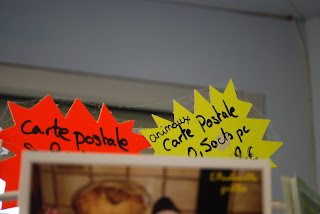 But what of the adults?

With the notable exception of the aquarium it has been peaceful and beautiful, but oh, so sad and strange in parts. I'm not going to say too much about the sadness, because it's all a bit raw and it's not all mine to talk about, but if the funny sags a bit from time to time, at least you know why.

A tripe postcard? That is honesty on a whole new level...

Did you get any for prizes? :P

whatever else is happening, there is kindness between you..
And that is good whatever the future holds.
Hang on to that.

I haven't commented on your blog for ages, but I am reading every day, and following the thread of sadness. I wish there was an easy way to make it better. Just know that there are people who care, even if we haven't met you IRL.

And, appropriately, WV is merponyb. A Mer pony would have made that museum worth the entry fee :)

Oh dear Jaywalker, I am sorry for the sadness but I am listening still.

And working on my fete entries, albeit slowly

I'm glad your holiday hasn't all been tripe.

I went to the Viking center in York once, they believed they had heightened the experience with smell, (pumped out at various stopping points), of cavemen!

Thoughts are with you pumpkin.

I completely agree with justme regarding the kindness.

As far as funny goes, funny is only part of your charm, Madame.

@Westendmum: Smell of cavemen!! Oooh, that is commitment.

Deililly - Damn, I missed a trick there didn't I. Never mind, there are plenty more here that I also wanted to immortalise.

Justme - thank you dearest, I will. We are doing our absolute best both of us.

Ginger - thank you lovely. And oooh, entries. I have lots of vegetable activity planned for my enforced stay in the country this week..

westendmum - hey, are you dissing the jorvik centre? Watch it. (Yes, the artificial scents are unbelievably nauseating, and they've phased out the kindly voice of Magnus Magnusson now. Sad.)

Red Shoes - hmm. Thank goodness for that as it's notably absent tonight. xx