I have been to Paris for the day. It is quite the thing travelling from the Normandy coast to Paris, what with changing trains in Lisieux under the disapproving gaze of St Thérèse, and the stops in many places with cheeses named after them. Add to this the ever present danger of forgetting to 'compost' and you are left with a day of unimaginable excitement. France, you are really very peculiar.
I have returned with:

1. Crucially, Fingers's passport. This was the hardest part, what with the Consulate being filled with mildly peeved British citizens tutting gently at the one open counter. British stereotypes fulfilled in the Consulate: 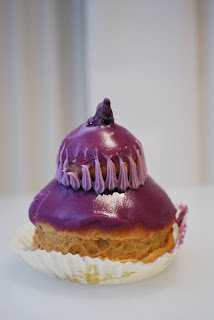 I also got its less photogenic but more delicious cousin, the St Honoré aux Framboises. In my mind, this is the platonic ideal cake. It is basically a mountain of rose flavoured chantilly and pink iced choux pastry balls, with the odd raspberry and rose petal for decoration. 3 hours of regional trains were not kind to it, however, but here it is, a pale shadow of what it should be: 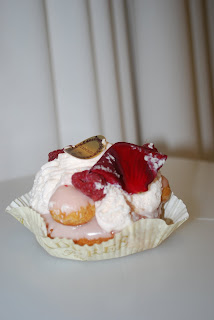 (As I type this the CFO is CUTTING IT IN HALF. How good a person am I? HOW GOOD???? St Thérèse has nothing on me. He doesn't even much like rose flavoured patisserie, what with being a man).

3. A Drag Queen Makeover courtesy of Céline on the Armani counter at Printemps Beauté. I wish I could show you the full splendour of Céline's work, when it had pneumatic lip gloss and nuclear blusher, but sadly, the broken air conditioning and consequent 32° heat on my 'Corail' (french for 'crap') train made most of it dissolve instantly. I can show you the melted, smeared leftovers though which nearly made the children cry in terror until they saw the macaroon box of peace.

Here I am imitating the terrifying facial expressions of Céline as she attacked me with her, uh, stuff. 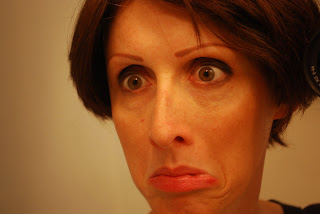 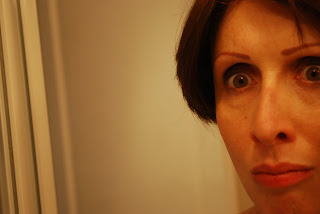 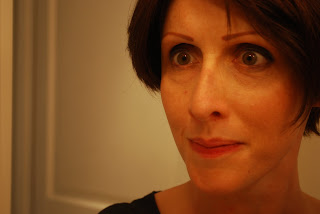 I sincerely hope St Thérèse didn't catch a glimpse of my hooker make up as I changed platforms yet again in her manor. Céline was not as terrifying as the Yves Saint Laurent make up woman in Fenwicks, Oxford who once painted my entire face in Hiawatha stripes of orange, declaring shrewishly that I must stick to autumn colours as I was an autumn person. However, this is not saying much.


4. Of course I also got some books (Lynn Barber's memoir, Rebecca Miller's Personal Velocity and something well-reviewed but possibly a Man's Book called Harry Revised) and September Vogue which had the unfortunate side effect of turning me into a High Court Judge, fulminating at the mispelling of Mormon and apoplectic at the appearance of Pixie Geldof in a fashion spread (I mean, come ON). I am officially 114 years old, and none of Céline's best efforts can do a thing about it.
Posted by Waffle at 21:08

Yes you are very very good, for sure. mmmSeptember Vogue! I want! I want! Drat. Shops closed. Also, Mormon--have read this word thousands of times in my life, and would have spelled it wrong. Thank God is not my job.

Ugh. Pixie Geldof. I dissaprove also.
WV = jorno, which British Vogue is not.
I had a hideous makeover and skin care buy at 14 of some now gone French brand which has scared me from makeovers for life.

Céline! Was she tall and skinny, with a fringe, and dark long hair like hay slowly drying in the Auvergnat sun (I have no idea where Auvergne is, but it sounds about right), and skin that showed the tell tale sign of years of sun exposure and smoking? And lips pinker than a religieuse à la fraise des bois? And a sort of permanent, quiet smirk?

Jessica - there, there. Let it all out. Let the ugly makeover memories out.

M - yes BITCH. THAT'S HER. You forgot the eau de gauloise fragrance from her skeletal hands. Also, you said she was good. She turned me into an ageing travelo. Punk ass.

mormon? how can you mispell mormon???

oh- just saw the last comment, sorry! morman it is then....(isnt that a mermaid's husband?)

Cruel Céline! I hope you got some good purchases despite her.

I think that someone should now come by my office with a little cart heaped with French pastries. Surely not too much to ask? Alas, the actual options on hand are Saltines and hard candy. Life is hard.

You are very colorful. I suspect my husband will be making some of the same expressions when he opens his birthday present tomorrow and finds....yes, it's Brigitte KEKS! I can't thank you enough for guiding us to it (I'm sure his thanks would be endless, if he knew who you were. Perhaps I will write something vaguely suggestive on a biscuit to really mark the day (I think "back rub" would be enough...)

Dude! I also said you had to say "no thank you" when she asked to perfume you for the day. She was all alone! All day! No one buys Armani! You were like the small, delicious flounder swimming straight into the shark's mouth. What you needed was a dash in, dash out, surgical strike operation but nooooooo, you had to sit down...

Congrats on getting the french beauty woman's expressions so spot on! I don't think I've seen her in Printemps, but I know the type! I have only ever had one good make up experience and that was at Sephora on the Champs, with the Make up Forever brand.

To be really honest, You can see you look gorgeous under the pancake! x

I was going to ask how it's even possible to misspell mormon but then I saw your comment. Morman. Umm, ok then.
My dad likes to call them the morons :-D :-D

It all sounds most unpleasant. Apart, of course, from the cakes, which are clearly the work of angels and little tweeting bluebirds of happiness.

I once made the mistake of asking an orange woman on the make-up counter in Debenhams in Winchetser to give me some advice on glamming myself up a tad.

She faffed about for ages with the tools of her trade and then opined: "Hmmm. No point really. Just use moisturiser more."

At least you got to look all Made Up afterwards. I just came out sweatier and with my hair all scraped back unattractively.

Screamish - and of course, they don't even have a word for a mermaid's husband in French, which has long troubled me.

Redfox - but Céline genuinely thought she was doing me a favour. Ah, tragedy. Ladurée should do tea trolleys.

Elsie - ooh! Back rub, daring. I might go for 'Manly slap on the back', tho' a bit long for a biscuit.

M - I am quite, quite sure that you said very positive things about Céline. I trusted you. I got oranged. However, I did not get perfumed, but actually perfumed myself with some vetiver thing that was perfectly pleasant. The real problems were le gloss, and le blush.

kathycastro - is it not? Also, there was a bitter cherry one. It was HARD not to take it too. I wanted to take them all home with me.

Everybodysaysdont - oh yeah baby. Ah, Sephora. It's almost a post in itself.

bevchen - don't we all. We're finishing our macaroons in a bad tempered each man for himself fashion.

The blackened eyes! The amazing orange! The fabulously spot on Makeup Lady expressions!

I have to say though, I am envious that you can still be so pretty despite the makeup counter onslaught.

When will The Geldof girls go away? Yuck.
I've been wanting to read Rebecca Miller's book. Will wait to hear if it's worth buying.
I once had a makeover at the Chanel counter that made my husband visibly flinch when he came to collect me. We were on our way to some party and I spent the car ride scrubbing it off. It was far more scary than yours!

oh Ye Gods I want those cakes! You have no idea how badly.

Little known fact about Turkey: THERE IS NO CREAM.

well, you can get get UHT in tiny weent cartons, but this is not Cream As We Know It. And there are NO cakes on sale with cream in, only some kind of weird artifical stuff made from petrol derivatives.

There is, however, baklava, but that is not the point.

They do wonderful custardy things here, but for some reason they never thought to ally custard with cake...

In other news, I think this is the first time I have ever actually seen your Face, Waffle Amie.

Mais, Mme Jaywalker, you are beautiful! And you look like my favourite actress, whose name momentarily escapes me, but she plays Debbie in the Archers, and starred in Green Wing.. tres jolie..

How gorgeous is it to be able to scoff even half a cake called une religieuse?! Fabulous!

As for the face contortions, I would have succumbed to the harlot style make-up, no probs - What would she have done if you'd refused?