In which the holidays are actually, well, lovely

You know how I don't do well with enthusiasm, generally? That I'm a bit like one of those huffy teens you see getting dragged sullenly around sites of outstanding beauty, rolling their eyes and fiddling with their mobile phones when asked what they think of Venice/The Sistine Chapel/The Taj Mahal? This used to cause me terrible problems back in the day when I was a proper lawyer. When some shiny partner type would sweep masterfully into my eurohutch and tell me in delight about a Massive Important Deal, it would take all I could muster just to not burst into tears at the prospect of all those hours, spreadsheets, sleepless nights, mathematical catastrophes of mine causing hideous losses, being shouted at by bankers and I would do well to manage an expression of studied neutrality. "You don't look very KEEN" they would bellow, narrowing their eyes whilst clearly thinking I was not quite the thing. Worst of all, I tend to look underwhelmed even when I'm not, really. Well I'm actually finding it quite hard here, because god, it is beautiful. Reader, I am Pleasantly Surprised. 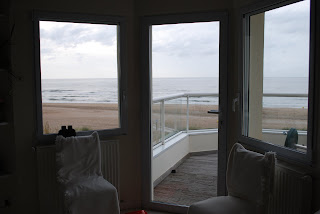 This is the view from the gigantic bed. Why would I ever leave it? Well, I suppose I could go downstairs and look at this view instead: 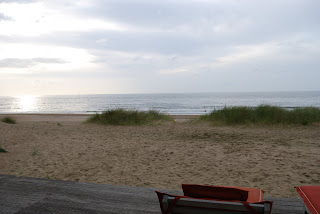 whilst sitting on these totally superior chaise longues that I would never in a million years consider buying for myself given my total aversion to outdoors, but that are magnificent for lounging consumptively.

And I am sitting, blogging (yes, I would be feeling a whole lot less sanguine about the whole seaside idyll thing if there wasn't an internet connection) and the sound of Pokémon: Giratina Gardien du Ciel or some such nonsense is almost completely drowned out by the noise of WAVES. Actual waves, and the odd malevolent seagull skreeking in fiendish joy as it tries to divebomb dogwalkers.

The best thing about this house is it allows those of us who would prefer to lurk inside well away from the demon sand and hidden from the sun under a thick hoodie (I am Not Good at beach holidays, I get sunburn within 45 seconds, my hands get covered in heat rash and sand gives me goosebumps.) to have the impression of actually being at the beach without all the downsides; whilst the sterner, 1950s types can run around in serviceable khaki shorts poking things with sticks and swimming in freezing water and posing grimly in front of their creations. 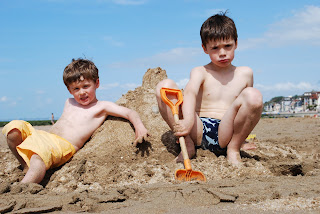 I finally picked my way fastidiously down the beach this afternoon swathed in clothes and factor 50, like a cross between Lytton Strachey and Madonna, to examine the sandcastles and huddle on a towel. Lashes was ninja kicking small heaps of sand, whilst Fingers asked delicately for biscuits in my ear, lounging against some kind of huge structure his father had engineered. The CFO was striding around organising things and swimming manfully, despite his much reduced body fat percentages of recent months. It was quite idyllic. At one point as I watched the spawn squabble over spades, the CFO came over and crouched down next to me.

And it is. It really is.

Thats a lovely post. Has left me feeling a bit sad though.

Oh honey......that IS sad. Are you sure? Happiness is such an elusive beast, after all....

lump in the throat, and I'm the most self-centred person I know. Did you at least bring some tea with you? Hang on in there

Bitter sweet....a lovely post, fabulous photos. Tough times by the sounds of it...what price happiness and all that.

Also a sand hater. I force my children to go to pebble only beaches whenever possible. Suits me fine.

Truly, truly, tres dommage. But, hey - take pleasure where you can.

nice vue though, despite it all. I'm even less of a fan of sand and sun than i used to be...too many Scottish genes.

but it's prbably doing you good all that heat and sun, even if yo have to cover up. Soak up the vitamin D...who knows what could happen....

My heart just broke a little. For you both.

I hope you can find what you're looking for.

It's final then, is it?
I hope you can work out what's best for all of you. So sorry for what you must be going through...

i don't know how you do it you know - you are such a good writer down of your life, its quite staggering.

It is a shame. I'm so sorry. It is hard that things must be sad and difficult when it would be so nice if they could just be easy.

I am glad Normandy is being beautiful for you.

Your words haunted me all night. You describe these scenes with such exquisite and tender poignancy. All I can offer in return is a baby aardvark for solace.

Oh, Emma. My chest is tight in sympathy.

Ouch. And after lulling us into such an unguarded state of beach-view envy, the poignant ending stabs right into our soft waffle-loving bellies. Sounds like the elephant is coming home to roost. They do build uncomfortable nests, those elephants. I can't say anything you won't have thought to yourself a thousand times before, so just enjoy the proximity of the sea and sand. Try recording the waves to fall asleep to back home! I never did and now I'm stuck with traffic, which I pretend is surf breakers on the cliffs. Not so great!
I have no baby aardvarks, but did you see this on Blue Cat? #1st ever hyperlink, hope it works!

Be really, really careful with what you discard.

I can't stop thinking about your post...pains my heart...had a similar experience and 8 years later my best advice is to echo the previous commenter...please be very careful

personal happiness is overrated and for the young - character, parenting two teens, companionship, humour - more important down the road

Elephants being herded and corralled, then?

If so, best wishes to you both.

totally disagree with Annonymous #3 -- personal happiness is all we have; hard won, elusive and convoluted, but don't give up the search for it.

Sometimes happiness is elusive, we might find it only in the small moments of beauty... I think people who are happy all the time have something truly wrong with them, or else they're born-again faith types, and I trust neither...

I wish you very well, JW, you and your startlingly beautiful progeny, and the CFO... Oh, and l'hermitte!

Sigh. For the beach, for you, for the CFO, and your boys.

I ask, can you be happy without him? Companionship, ease, familiarity - oh I miss all that so much and so strongly, sometimes I wonder if I'll every be okay. Good luck. x