Fête round up, holiday edition

Firstly can I remind you about the Flickr Village Fête Group. GO. LOOK. Yeah, if I wasn't a useless shithead I would have put something on the sidebar here to remind us. [UPDATE: Scroll down to the bottom of the page and Marvel. At. The. Wonder. ] Ideally I want one of those boxes where you can see a few photos. Advice, anyone? Sinda and her daughters have been making a terrifying rainforest cake scene that I am more than a little envious of, whilst Peevish, last year's super duper supreme fête champion, and her daughters have made eery glue tear crying creatures. They are ace.

Lauren and Louis have been keeping busy preparing for the end of days. Quite correctly, one of their main concerns come the apocalypse is the absence of freshly brewed coffee, so they have fashioned a coffee machine out of household rubbish, and provided us with full instructions on how to make your own. I am calling this "miscellaneous" because, well, it is.

You put the grounds in the top, like so:

And then you pour water in after them, and the water flows down through a metal disk that used to be the bottom of this container. (see ragged top edge where disk was cleverly removed with a dull scissors) My son has pierced the disk several times with a hammer and large nail, and then covered it with some mystery packing material from IKEA that looks like a fine plastic mesh.
And so the water flows down into the cardboard area, making it a bit soggy but still perfectly functional. Some of the "coffee" comes out that hole there on the side, if you tip things just right; the rest flows out from wherever it likes around the bottom of the device until it finds its way into your cup, more or less. 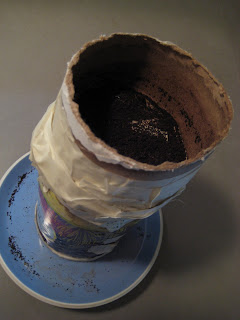 This makes a lovely afternoon cup of cold coffee with some added texture, as you can imagine. We haven't yet tried hot water because we are concerned about the viability of the masking tape. We think more tape might do the trick. 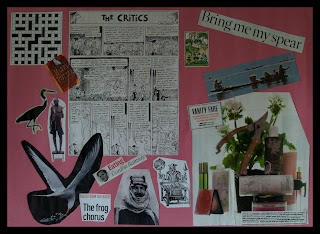 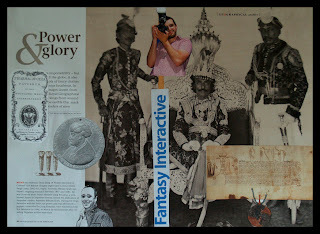 I asked the wimmin what they thought about this entry.

They were a little busy with a consciousness raising session but spared the time to view Keith's art work. 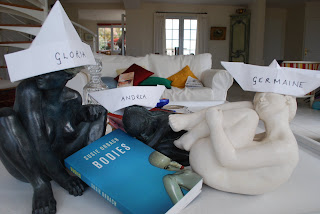 Germaine was a little scathing about what she describes as the relentless phallocentrism of his world view. 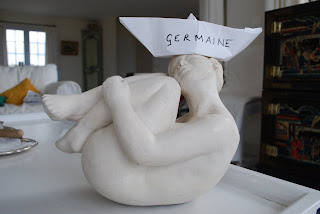 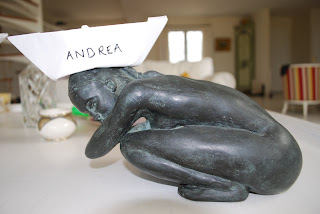 Gloria, oddly, is more interested in what's happening to our Control Lemon. 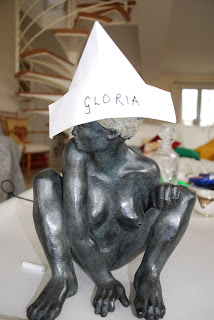 Gloria! Scandalous news of the Control Lemon! I can only think that the vibrations were too strong for him, even in protective casing of the barbecue. 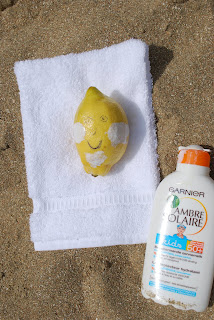 Now I have to go and deal with a crab because shiny, perfect people from Paris are coming and in my terror I have somehow agreed to make crab pasta for them. I entirely know where this is going. By the time they arrive I will be shiny and red with thwarted effort and despair and coated in crab guts, and they will come in, all Hermès Un Jardin après le Mousson, Petit Bateau tops, Tod's loafers and shiny shiny hair and I will want to die and will sit tongue tied all evening necking Shopi vodka. Vive les vacances!
Posted by Waffle at 17:07

There's a blogger widget for showing photos on the add gadgets thingy on layout.

Andrea's obviously too upset about her unfortunate foot deformity to notice.

and gloria looks surprised in the act of laying a strangely shaped egg. or is she just looking for the vodka bottle?

crab pasta is great even if its just guts and bits....your life is still infinitely more exciting than mine, petit bateaux tops and all.

Hey that coffee maker is a masterpiece, I've been told! :) But what I really want to know is how long do I have to keep it before I toss it back from whence it came... le trash bin.

I have another entry for you. I shall email you the photo in a bit.

That Power collage is first-rate. And, come the Apocalypse, we are all gonna need coffee, so that's useful. Plus you get to re-use IKEA packing materials, thereby earning some sort of Eco-Green badge of approval, surely?

I am nursing a nasty cold at the moment, and feel a bit like the control lemon must feel: mouldering and abused. But at least we won't suffer the fate of crabs.

You will find it rewarding to know that when I clicked on Flickr Village Fête Group, I got the following message (in big bold centered block letters):

This group falls outside your current SafeSearch filter.
You can click through to see it if you want.
Or, actually, no - take me home.

I love paternalistic, patronizing Websites, don't you? Especially because, as far as I know, I have no "current SafeSearch filter."

Emma, you are shiny and wonderful, fret not, ma petite!

LLG - they have been wandering round with large smelly claws all day. It's unfortunate.

Iheart - poor, poor Andrea. It can't be comfortable like that, can it?

Lauren - you have to do it in stages. First hide it somewhere until he forgets about it. Then bin.

Bevchen - oooh. More entries. I like. The worst bit is the "brown meat" which in this crab looked like watery pond slime. I just used lots of wine and garlic and prayed. She was pregnant too (guest, not crab).

Peevish - the control lemon is fine. It's the magnetised one you should be worried about.. Maybe use one of your own lemons to make yourself a soothing drink?

Veronica - I know! I don't know what Flickr has taken such offence to. There's only one arse biscuit...

Woman - you are lovely, however I have been wearing the same mildew flavoured hoodie all week. They recoiled in horror.

Loving the mummified lemons and hoping the crab turned out OK.
I can't believe you are actually willing to take on the Dung Beetle and now I feel guilty about even suggesting it. (But only a bit).
Dung beetle here: http://tinyurl.com/n6usu8
I'm only interested if it has a huge ball of poo though. Probably made out of chocolate truffles. Not sure what you would make the beetle out of. Maybe paperclips, although my better half is suggesting that you use a melon for the poo ball and smaller fruit to make the beetle.
Bah! this is nearly as much work as making it. I'm exhausted.

And how did you know it was mildew flavoured, I absolutely dread to think! Your pauvre, pauvre dents! x