Yet another weekly round up

Eh. I want to tell you all about the pilgrimage Fingers and I made to see Kai Mook, but I want to give you photos and the memory card is stuck in the camera and apparently requires a screwdriver, so it will have to wait. In the meantime, let's have the soon to become traditional..

I am in London lurking in the Mothership of Ennui, where I spend the entire day weeping, thereby wasting important shopping time. Thankfully by mid-afternoon I get it together sufficiently to totter round Waitrose and buy confectionery. Too late, however, for my reputation at the Mothership, where the sight of me going to pieces in a corner office proves irresistible for many of my former colleagues who troop past to admire the carnage. This must be the fifth time in nine years they have watched me go to pieces messily in the gunmetal grey splendour of the fourth floor.

I lie on the floor of the ladies, run away from people and squabble ritually with the staff in Costa at Moorgate in a restorative fashion about the nature of an extra dry cappucino. I am patently insane and complaining about frothed milk. It's just like old times!

Much improved, the weeping only comes in occasional jags and I make it all the way to 11h30 before I am overcome for the first time. The weather makes up for my newly sanguine mood by going completely insane and flooding much of London in flash storms. Dr Capybara shocks the internet into silence.

I drag my bags of books and food back on the Eurostar, curling up on the seats for a final wallow. Although I am absolutely delighted to have seen Violet's divine baby, I feel in all other ways, the trip has been something of a mental health fail, and resolve not to make running away to London an automatic default when the opportunity presents itself.

I get home late to a rapturous welcome from the weepette, whose tail wags so hard it nearly knocks him over. The CFO's mother has reorganised the entire house from top to bottom in the course of the last 4 days and I struggle to find a spoon. I fear for the TWO WHOLE WEEKS she will be dog sitting in August.

The children examine their Fairground Grabber Machine, carried at great personal cost to my shins back from London, with the unsmiling intensity of a team of forensic auditors, before deeming it acceptable. They refuse to tell me what they have been getting up to at their "art" activity week. It is, apparently, a surprise.

I take the weepette to bed with me (the CFO is in Switzerland) and it is a complete bloody pain in the arse, fidgeting all night, leaving me scratchy with exhaustion. Lashes also puts in an appearance at one point to ask what death is like. In an attempt at diversion, I tell him some people believe in reincarnation, which tickles him. He decides he would like to come back as a stag beetle "because they are HARD".

The CFO and I go for a scheduled Talk. He buys a shirt and I buy a suitcase and we share a crappy bagel. We talk ourselves round in circles, then we stop.

The internet BREAKS, forcing me, shivering and sweating, onto the Corridor of Ennui where everyone is astonished at my apparent devotion to duty. Later we attend an exhibition of the children's entire week's cutting and sticking oeuvre. It is impressive, particularly in quantity, and difficulty of transporting. I end up carrying a shoe box lid filled with free sliding beads and a large slice of polystyrene protruding from it at a right angle for about an hour around the streets of Brussels.


Later I absent-mindedly take the dog for an extremely long walk, all the way to the Place du Châtelain which is full of shiny young eurothings being carefree and loud. The weepette and I slink past like the doom-laden ghost of Brussels future. The dog is getting a LOT of exercise at the moment, what with the CFO taking it on long mental health runs, and me walking it round in abstracted circles. Not enough exercise however, to stop it trying to drape its skinny body meaningfully between the two of us like a big eyed child in a daytime tv divorce mini-series.

In a catalogue of minor disasters, everywhere we try and go is shut, and everything we try and do is thwarted. The CFO draws the extra short straw with an afternoon trip to the Tram Museum, which is shut until 2010. I make obscene biscuits.


Finally in the evening the children and the weepette have a compensatory video night with milkshakes and a ridiculous film about flies. 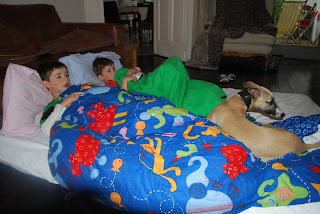 Since the only functioning internet connection is in the room next to the sleepover, I spent the night sitting in complete darkness trying to type, only finally conceding defeat when I mistake a pencil sharpener for the mouse.


Fingers and I take a trip to see the bebe oliphant on the world's slowest train to Antwerp. This deserves a post of its own.

Do join in with a haiku or account of your week in the comments box.
Posted by Waffle at 22:36

Haikus are too difficult at this time of night (or rather after 3 glasses of wine). My week?
Monday - work; boring
Tuesday - Friday - ditto
Saturday - frantic cleaning followed by cooking for mother
Sunday - barbecue with in laws.

My WV is whiblie; I am feeling a bit like that right now.

You know I have no idea what happened this week, a crushing mix of impending legal doom and super hero costume parties:

Week started swimmingly with a beautiful drive up California's Highway 1 from just south of LA home to San Francisco, with nights spent in Santa Barbara and San Simeon, only to come to a shuddering halt on Tuesday night by Someone Else's Boyfriend playing mindgames. 36 hour morale dip rectified by Thursday night with mutual exhibition of actual mature behavior, perhaps a first by both parties. Friday spent lounging by pool, Saturday and Sunday preparing for impromptu camping trip with high school friends which begins tomorrow. Hmmm, aren't I supposed to be looking for a job? Oh yeah, maybe next month.

Long coastal highway
Not as twisty as men's brains
Will it be worth it?

difficult child
husband dying of man flu
where is my liquor?

got hit by a car
whilst riding my crappy bike
one way streets, damn you.

Monday: the week with me arriving home from work and discovering the dog had climbed onto the dining table, eaten an entire unopened box of Hostess 100 calorie Cinnamon Streusal mini coffee cakes that were in a grocery sack. They were individually wrapped-and no, she did not eat the wrappers. She is not stupid! When I discovered this, had to rush her to the 24 hour Vet, sure I had killed her for leaving something with artificial sweetner sorbitol in it in her reach. I sobbed and showed up at the doggie ER looking a mess. Fortunately she is fine, although I spent Monday night sleeping downstairs on the floor in sleeping bag to be near her and let her out quickly. Did I mention that she is a dachshund? Friday: he week ended with me losing a key button on a slightly loose pair of pants and spending the entire day at the office alternately trying to hold my trousers together with staples and binder clips. That sums up my week-I love haiku but forget the rules-

Danced like a muppet,
finished latest novel
sat on the toilet

I'm so glad I've found your blog...love the biscuits!

Sorry, I was completely distracted by the thought of Cinnamon Streusal mini coffee cakes - what's the question? My brain is blighted by a weekend of Village Festival (which at least includes a Beer Hall) and I remember nothing of last week.

Last week passed strangely.
Wife out of town, me alone.
Not much else happened.

Must lose 10 lbs. soon
Too, too fat to exercise
Resort to ice cream.

This week is summer
Must take daughter to park now
Cannot take Beagle.

Suits, as I'm feeling barbaric after wrestling with Verdi all week, conducted by an irritable Welsh conductor with an OBE. Wasn't aware that stood for 'Orrible Big Eejit.

boiling hot weather
office a terrarium
take me to Iceland

My week: blur of holiday ennui, with intermittent internet joy.

May go see the elephant this week. Was it worth the trip? I suppose I will read about it soon enough.

Am ordering cookie cutter TONIGHT - already located it on Amazon.de. Thanks. That's going to make my next week.

Albuquerque air
clear, Betty gone to heaven.
We hug and then go.