I'm sorry, I'm not going to be able to write anything this evening as my children have unfortunately been possessed by SATAN. Satan is on Twitter so I have written to him requesting he return them, but he does not appear to be big on customer service. I suppose that was to be expected.
The badness was to be expected too. The weather is hugely ennervating, hot and rainy and oppressive, and they have been terribly good for AGES, barely objecting to my fobbing them off with €5 notes to go to the corner shop for confectionery and endless well-intentioned but crap vagueness.

I suppose I ought to also respect the right to a private life and not tell you the repulsive details. But between them they have all bases covered today including wounding personal remarks, maddening insolence AND dog torment. Whenever I sit down something abysmal happens. I am coated in bright green energy drink and chocolate and I have shouted, oh, Nathan, I have shouted repeatedly and it's making no difference, because I have no natural authority and a sore throat. The immortal words "because I say so" have just passed my lips. If there was gin in the house I would be drinking it.

Instead, we could play "where did the Pontypines used to live". Pin the aquarium on the room, if you will. 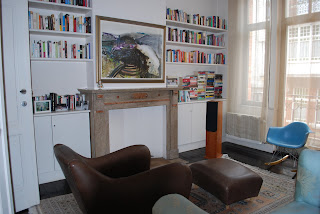 No, that's quite boring and there are so few places it could have been.

We could look at a picture of the dog? 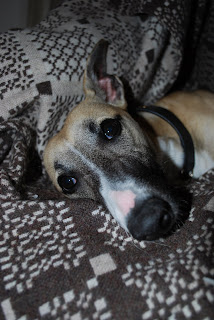 I know! An archive shot. Proving that I was a much more objectionable toad than my children could ever be. What the hell, TWO archive shots. 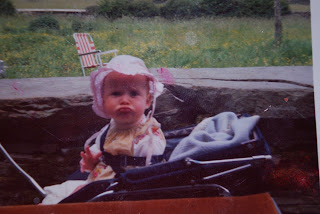 My children were much nicer babies than I was. Neither of them looked like a hardboiled egg in a lacy bonnet. 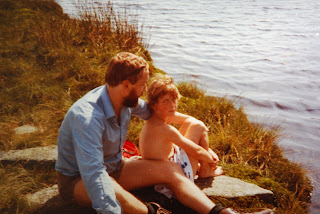 My expression! I am right back there, a ball of hate, outraged to be once again forced to march up a giant boggy mountain when I could be hiding in a corner with an Agatha Christie and a CurlyWurly.

And now I really must go, because they have started raiding the cupboards for glue to sniff, or to stick waffles to the dog's head or something and I may be a 'parent indigne' but I am still British, dammit and dog cruelty cannot go unremarked.

You look sweet in your bonnet. But i can see why any older you might be looking peeved: i' d' be rather put out, not to mention suspicious, if someone made me sit that close to the edge of a cliff.
Follow @god_the_father, just to be on the safe side

But how did you come to let the gin run out, Waffle, HOW???

This is the penalty one's body exacts the next morning after one has drunk too much wine the previous evening; said penalty must be paid in the currency of Nurofen Plus.

I don't think I have ever seen that expression on such a young baby. I'll bet you were a handful. But cute, very cute!

Out of gin? Maybe The Real Pope would let you have some sacramental wine.

The second expression is classic, suspicious, yet also sooo disdainful. Perfect teenager. Have you tried the same expressions on satan's little helpers?

Possessing no sense of humor at all, I am trying very hard no to take you literally and keep in mind that everything you say is magnified by the power of 10. Nevertheless, even if it wasn't, it still makes for interesting reading and I feel like an anthropologist peeking into a modern displaced family that's trying to cope. I think the dog is doing very well.

i like the sound of your house - it sounds like the kind of place where the chaos i generate could slip by almost unoticed, apart from the occasional landslide of books - i have three weeks of work and have been compulsively stocking up in advance!

If I were there, I'd definitely tap on that dog's nose. Like nonstop until she bit me.

Hard boiled egg in a lacy bonnet. THAT is why I keep coming back for more. I wrote about you in 3limes! Come and see! It won't make you dirty or sticky.

That room is so tidy and organised-I think you've lost the right to call yourself a slattern.You look as if you're channelling Angelina Jolie in the baby photo.

Sniffing glue sounds so much more fun than gin anyway. Gin tastes like mouthwash. But maybe that's just me.

Didn't you know that waffle fascinators are all the rage in canine couture circles? It's Wednesday, the kids are off. I've had a shite day too.We have Thursday and Friday respite - then the weekend looms large.Bollocks.

I got through the day by buying my grandchildren everything they asked for. Quite astonished to find that a small child's comic costs £1.99.

Had a deeply disturbing phone call this evening, through which I discovered that I'm thought to be the person to support emotionally a depressed teenage boy whom I hardly know. Since my daughter has never forgotten the time I robustly told her to "cope with it", I feel they've got the wrong woman.

Agatha Christie? You look like you are about 7 in that picture. I think I was about 37 when I finally managed to read her.

Maybe you just have that angry look because you didn't have the proper clothes for a march up a boggy mountain? Totally legitimate, I think.

I also wrote about you at Gas-Food-Lodging.

My children are permanently under Satan's sway.
I tagged you in my blog (for getting bad 80's songs stuck in my head).

That was pretty much my only expression when with my parents between the ages of 14 and 20. Thank God it wears off eventually.

cfo commented?? or am i reading things? (i am high as a kite on mega painkillers....)

I have recieved a call from the Pontypines, They've just made it to the Bahamas...
I am not proud of what i did , but I could not face their sad smiles anymore.

I think the CFO did a terrific job writing English and getting his point across, if it really was him. If it was him, he's one of the good guys.

Crikey, was that really the CFO? What a star! You've gotta love that guy.

1. Egg in a bonnet photo is the best thing that has happened to me all week. If I am lucky enough to have a baby who looks at me like that (would crack me UP!) I"d be a very fortunate mama.

2. CFO!?! Mon dieu. I don't know what to think. I guess I won't think anything. Except that I'm very glad the pontypines made it to the Caribbean, thank goodness.

I always imagined pontypines to have sad smiles. I had sea monkeys once, and throughout their short lives they alternated between pained disdain and studied indifference. They did nothing for my self confidence.

Message for CFO, are you starting your own blog now or will you just be adding comments here from time to time? (Go on, start your own)

I can confirm that is the real CFO.

Can you demonstrate your commitment with something endearing in the form of a tortoise spreadsheet?

i agree that the CFO should have his own blog, definitely

hey cfo, i am so so glad you love Emma because she is amazing and I liked your weird monkish bathrobe.

CFO, I don't know if I should appoint myself to speak on behalf of Emma's readers, but you must understand, we don't just like her, well, we worship her, maybe from afar, but the fondness is genuine. As a man of numbers, I'm sure you'll understand, we are interested in trending. Are things you do affecting positive trends? What might enhance Emma's wellbeing? Graph the outcome and show your work.

As they get older, I promise you, their bad behavior becomes less physical and more mental. It's something to look forward to.