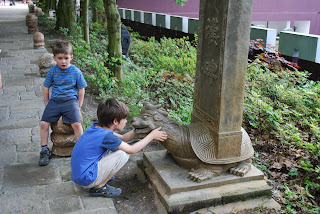 Shhh. As I type this my children are, whisper it, playing with each other.

As a rule my children would rather be flayed alive than play with each other. This has been a source of some sadness, for I know that in our innocence, we believed having two children less than 2 years apart in age meant they would be playmates. Friends, even! Clearly, with hindsight, this is an outlandish idea, and if I can be forgiven for falling into this trap (10 years separate me and the Space Cadette), the CFO, who spent his childhood in pitched battle with his 3 years older brother, should have known better. Thus far, their attitudes to each other can be characterised as indifference, followed by irritation, followed my rivalry.

You will not believe me, I fear, given the reputation I appear to have given myself on these pages for indolent, lazy ineptitude, but this has been a rod I previously fashioned for my own back. Reader, I used to be Too Much Fun. Si si si. My children's early years were a catalogue of outings and activities, painting, baking, swimming, zoo, elaborate cutting and sticking projects and the like. I had a giant cupboard of supplies and a manic glint in my eye. Even in PARIS, I was a constant hive of activity, trekking miles across the inhospitable Métro network with a pushchair bound infant and a two year old in single minded pursuit of fun. And you try wringing a shred of fun out of the Palais de la Découverte and its dusty Van den Graff generator and stuffed stoats.

You probably don't believe me, do you? Independent corroboration please: friends and family. Honestly, it is true. The CFO was always rolling his eyes about it. Am I sounding slightly defensive? I was a fun mother! Yes! Truly! Pfff.

Anyway, even when my enthusiasm waned, or tiredness became overwhelming, or the fun months of 2005 when I was in the throes of an impressive nervous breakdown, my reputation for 24/7 entertainment meant they would continue to hover round me in the hope that I would entertain them like a performing seal. Being shrewd, and fast learners, they also knew that if I was not equal to the task of entertaining them adequately, the crushing guilt would lead me to lavish gifts upon them.

But just recently, they have started to spend more and more time with each other NOT ripping each other's heads off. Partly, clearly, it is because right now I am terribly, terribly boring. We all know this is true. Things are really, but REALLY tricky. The CFO and I are whispering at each other in corners. My chest is permanently aching and yes, I want to sleep all the time and maybe cry a little from time to time or gently bang my head against the wall. That is just How It Is and I wish it wasn't, but it is (defensive, moi?). I do not feel good about this, for the spawn. I feel wretched about it and I am trying to make it as ok as I can.


But! Right now I am here in my bed, nursing my aching chest and ministering to my ridiculous weblog and there are sounds of uproarious, hilarious play from upstairs. They have not stopped laughing all weekend, mainly at my expense. They keep doing that thing where they catch each other's eye when I am pontificating at them about not feeding the dog dishwasher tablets, or droning on about the starving in Africa and laugh hysterically. And maddening though this is at the time, it is also very, very comforting. I love the idea that they can be allies, share an eyeroll at my expense, make each other laugh. I feel a bit shit about it too.

I have just heard them go past.

I've been waiting for this for five years. Shouldn't I feel a bit more euphoric?
Posted by Waffle at 17:46

I have two sisters - they are 20 and are easily far more sophisticated than I will ever be, they are also beautiful and clever etc etc in ways that I will fail to ever naturally achieve (without a boob job and some serious work anyway)

My point? oh yes - one of my sisters is feistier than the other - you could term her my nemesis I suppose, the yin to my yang - if anyone can shoot a bolt of evil directly to my heart its her.

Throughout my childhood my mother and father would look on in despair as we tore strips off each other, telling us how awful our lives would be if we didnt learn to get on etc etc.

Anyway, now that we are older and wiser(ish) we have reached a glorious plateau, a sort of feverish surreal energy exists between us where we can spar mercilessly whilst the rest of the family look on perplexed, anything that gets between us normally gets linguistically obliterated, but we have a deep mutual respect - this morning as we schreeched at each other lovingly over the toaster I realised its sort of like a ferocious imaginary emotional padded ballpond type thingy- where no damage can come to either of us, we can just joust merrily until we are exhausted.

children are fascinating - am still trying to make up mind as to whether I should adopt some sort of jolie-style rainbow gang of international orphans when I settle down with my stupidly rich german lover, or whether I should just stick to spending all his money on taking marvellous women out for endless expensive teas at all the best hotels?

A quandry, and a pointless comment on your post - yay for harmony, but then also yay for dischord (am intrigued as to whether fingers and lashes will develop any of your unique english wit? is it possible? will they ever fully appreciate the genius of fawlty towers?)

Babysitting offer still stands - am suprisingly good with children - if you like your babysitting michel gondry style, and I imagine not speaking french will add to hilarity.

As an only child myself, I haven't the faintest notion how sibling relationships should be expected to go, what one might be as a parent expected to possibly do about it, etc. Reports from the front fascinate me.

Anyway, euphoria might be a bit much to ask under the (various) circumstances, and I can easily see how this development would make you feel both glad and sad. But it's true! that it will be lovely if they can be allies to one another, and I think in the end it will even be lovelier for you, too.

It was ever thus... I remember the precise moment my children began to exist apart from me. Though they would remain the center of my universe for many (far too many!) years hence. Nevertheless, it was no longer to me they looked for things, it was suddenly to each other. It felt like they were shifting loyalties from me, but it's really not.

They're just discovering how comfortable they are in the world you created for them. It means you've done a good job. Time to celebrate you and recognize you are "doing it" right!

If there is any consolation to be found, I would say that the closer they bond with each to the other, the less likely it will be they will bond with some stranger-child from school who will cause you unspeakable angst and depression, further down the line.

Wishing you well, I enjoy your blog. I too lived in Brussels, tho as a child, with my grandparents and aunts and uncles.

[I am speaking as the mother of three grown sons (my oldest turns 40 this year!) Currently my 15 year old grandson is visiting and he is basking in the life of an "only child". (Grandparents do "only child" really well!)]

Siblings are supposed to bond with each other to the exclusion at times of the parent, though not constantly, although it may be your predicament that makes it so, so you should watch that. They ought to come to you for some comfort and exclusive time and love. You must be able to give them that, no matter what your situation is. That's part of parenting, after all. Why don't you get some help for yourself? No good suffering in the bedroom all on your own.

lil'sis told me recently that she thought I was a weirdo sitting in my room reading all the time & wanted nothing to do with me as a child. Then we fought so badly that at boarding school we were put into separate houses (unprecedented). Now we are like Siamese twins. She is my best friend, my conscience, my everything. Go figure. LLGxx

If it's any consolation they will probably loathe each other again next week, and be arms round necks the next week. That's my humble experience. There is no middle ground with my children.

Be thankful you only had two. With three it's usually two that love each other against one that is universally loathed. The outsider changes but it is rare that all three love each other at the same time.

it was actually my sister (FAAB) who got me onto your blog in the first place, literally this weekend. we fucking hated eachother when we were tiny but now she does awesome things like provide me with the freshest blogs to read.
to be honest - i would be feeling pretty far from elated with two small people forming a tight coalition against me in my own house. but it must be better than screaming matches and physical violents?!

Children are odd. I know this, because I was a really odd one. I'm talking buying particular shoes purely based on their ability to let me stamp on toes, and crying ferociously whenever "My heart will go on" came on the radio (I know, I know, the shame!).

With siblings, we are even odder... and yet. I now get on well with my sister... when once we were worst adversaries!

Enjoy the non-fighting while it lasts! Mine are a year and a half apart and if they're not viciously fighting they are begging to have a "sleepover" and stay up late together playing.

They need play time together.

Get your feet up girl, scoff the chocolate and have some time for yourself.

Yopu'll feel tons better and ready to umpire the next unevitable squabble,

I usually get very suspicious if there is no yelling screaming fight underway with my two. But lately it is getting quieter. It does go in waves, I think, and the older one helps the younger one (they're only a year apart) with more now. My sister and I were 3 years apart and same thing, arch enemies until we were a little bigger (she still has the scars to prove it), but best friends now. I say relish it!