I disappeared up my own arse momentarily this morning. Firstly, you must know I am basically stuck in bed. I can't really be bothered with Wednesdays, as fully documented previously, so I thought I would at least delay the start of Wednesday until the last possible moment. So I am in bed, and I have Marks & Spencers breakfast supplies, and the sun is streaming in and I had been reading Persephone's beautiful blog and decided I to could make one of those exquisite, capturing the moment posts. Yeah, stupid, I know. 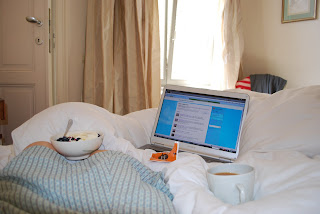 Or some such sparse but evocative stuff.


I might even have tried to capture the weepette snoozing beside me, but since the CFO now reads the blog, I bloody well can't, can I? I got into trouble for the weepette/bed smuggling. I can't bring the gulag headmaster back to the house for sex either, apparently. NO FUN.

So. I take a picture, above. It looks like shit, of course. The yoghurt and maple syrup in particular look UNSPEAKABLE. You can't see the good bit of the bowl because it is (very) full, and when I hold it up to take a picture of the side, yoghurt spills onto the duvet. I lick it off, obviously. 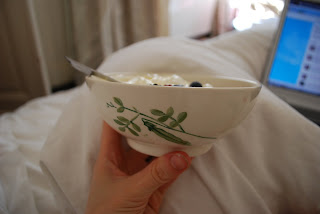 My nails are probably really dirty too, but I can't even be arsed to enlarge the picture and check.

My lap, in the foreground, looks GIGANTIC, like an enormous patterned cushion. The bowl is outlandishly balanced on my knees looking tiny compared to my cushionlimbs.

That cup of tea? Leaning over dangerously? 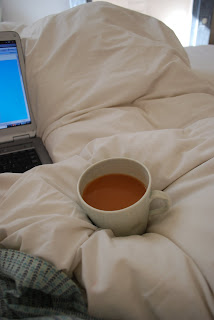 Pff. I eat the yoghurt, lick the bowl and take a picture of it dirty, accessorising with dirty mug, dirty spoon, Quick tray with magic marker. 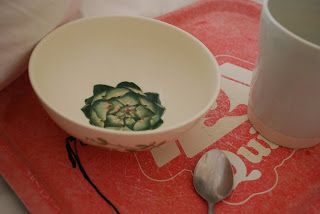 Then! I can't even move the fucking pictures around to write the post because my laptop is so buggered by yoghurt and snails and crumbs. I drag myself downstairs to fetch a mouse. My knees have scorch marks from laptop burn. Does this happen to Grace from Design Sponge? I bet it doesn't.

Yeah, whatever, anyway. I had a nice breakfast. Wednesday is in abeyance for another 40 minutes or so. Any lingering doubts we may have had about whether there is a frustrated style blogger hiding withing this moth baiting, Uncle Ben's Microwave Rice cooking, stained shell are now dispelled.
Posted by Waffle at 10:30

For the whippet go for it girl, for the gulag headmaster wait for me to flirt a little with him, I will drag him myself in bed

Love hearing about other people's habits in detail. Assuages my curiosity without having to live in a commune. (Have lived in 13 communes in my youth and never again!) So thank you. Precarious balancing of tea mugs is my specialty- drives H insane. I just say to him it is his problem; get over it!
You continue to be hilarious in a most delightful way. A breath of fresh air.

Where to from here? said...

Dear Emma
I have been reading you for a year and I need to say ten things.

1. CFO welcome to the blog.
2. Thank you for loving Emma
3. I love Emma's blog because it so captures the paradoxical nature of life.
4. BW has helped me to understand my life long relationship with depression
5. It is hard to find oneself loveable even though the world around you loves you.
6. Your house looks a lot less bordelique than you describe it.
7. You look a lot less bordelique than you describe.
8. I miss my mother and father more than I could believe imaginable even though I was a total cow sometimes to them.
9. You write like a dream.
10. Have a good Wednesday

You're eating yoghurt? I'm absolutely staggered. Isn't that borderline wholesome?
Wednesday commiserations coming at ya! Although, I'm feeling rather smug, as I have scored an afternoon play date for Sprog.Whilst he plays happily, I shall play happily...whilst lying in the sun and eating cake. My advice to you, is stay right where you are.

Good morning CFO! (Thought I just had to mention the blog version of the elephant in the corner.)

Shouldn't that be elephant tortoise, Mya? As for your non-Elle Decoration post JW, well, the bowl was lovely anyway. If a little bit grubby...

your bed looks incredible. you are living every dream i never knew i had before the kids arrived.

well i wouldnt underestimate myself if i wereyou..you are kind of becoming a style blogger..your own style...cant put a name to it right now....

I'm experiencing the same feeling i used to get in primary school when some boy wouldnt play with me. The Other Blog has denied me permission. (sigh)

I'm off to think of something interesting to blog about, dont know how you do it EVERY day.

I saw this comment in the paper and thought of you. He's talking about that girl who got 56 stars tattooed on her face 'accidentally'

Jules Clocher, a Belgian psychologist, said: 'The trauma this girl must be feeling is indescribable. She feels like a circus freak - and no wonder, because she looks like one.'

Your breakfast in bed sounds heavenly. Your artichoke bowl and tea cup are glorious. CFO flirting with the headmaster is just fantastic. All in all, an excellent start to your style blogging career.

"An artichoke bowl, a jug of yoghurt, and thou."

Wednesdays are stupid, it is true, but I myself disprefer Thursdays even more. Thursday! What is the point of a Thursday? To attend meetings, to feel acutely that it ought to be Friday, to break the heel of one's shoe, to alienate one's loved ones via unlovable displays ill temper. I can hardly wait.

Leaving style to one side for a moment, I can't help but notice that the day after your trip to the UK tehGrauniad has this.

Go on, tell us it's a coincidence, I dare you.

(WR=smickeen, n., the annoying grin on the face of one caught doing something naughty that they know you cannot prove.)

ha! i have tried taking lovelylickey photographs! but they are crap. i blame the fact that i use a 19thC phone camera with fluff caught in the lens that inexplicably turns off if i try and access the address book.

but never give up hope, jaywalker, we could capture that perfect moment yet.

I can't be bothered with Wednesday either, so I'm only at work in spirit. Greek yogurt with honey is the breakfast of champions, which means that tomorrow you will be unstoppable.

ha ha ha ha ha...everything about this post reminds me that we are all balancing on the precipice. i love the crumbs, the balanced mug, the licking of the bowl, all of it actually. and most of all miss waffle, i love your honesty.

ps not sure about the circus freak comment, tho.

It looks comfy though.

I'm having a dressing gown dat today. I too can't be ar$ed,