Busy busy times. What to tell you about? The neighbour's €50 entrance fee party? The Un-Birthday party?

I think I'll save the neighbours' Belgathon for tomorrow when the raw emotion has subsided a little (throwing thongs at Johnny Halliday, people. I have much to relate).

And of course, there ain't no party like a soft play party 'cause a soft play party don't stop. Or start. Or something. Look how much fun Lashes is having in this windowless jerrybuilt warehouse hitting things with a plastic hammer! 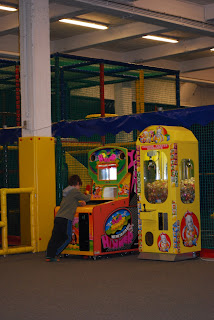 That strip lighting. It gladdens your heart, doesn't it?

We were really quite shameful parents all round this year. Having failed to give either child a birthday party, as confessed recently, we have shoved them together into this cheap excuse for fun, limited them to 5 invitees each and party duration to a convention flouting two hours (two and a half is the union approved minimum). We did this even before we realised it was the neighbours' party of doom the night before, but we were terribly glad when we did realise. Soft play centres are trying at the best of times, and when your blood is 85% alcohol, they become a very special variant on purgatory, complete with the high pitched squeals of ten year old girls, lost children that do not even belong to you, and popcorn stuck to your cheek as you try and catch a tiny catnap on the table. We feared the worst.

Entirely predictably, we were hopeless. During those scant two hours, I skulked around trying to avoid getting hit in the face with foam blocks and spilling coffee over myself, and the CFO took terrible pictures. Occasionally we would bang into each other, look haunted and make guttural sounds, then split up again. The children got on with doing whatever acts of depravity took their fancy entirely unfettered by adult supervision. And you know what? It was fine. None of them even noticed how shit it was.

There's a great photo where I am sitting in the middle of a table full of rioting children single-mindedly shoving cake into my face, oblivious to the chaos. It's like one of those love scenes in films where suddenly all the surrounding action fades into a muted blur and it's all about the boy and the girl. It might even be in slow motion. Except here it was about the woman and the cake. It wasn't even good cake, because reader, I did not make a cake. I got out the eggs at 8 this morning and was looking around hopelessly for butter, when the CFO came in and silently removed them from my still trembling, post-mojito hands, pointing to the part in the leaflet for Kids Factory* that said "gâteau fourni".

Ooh, I even have a photo of the cake: 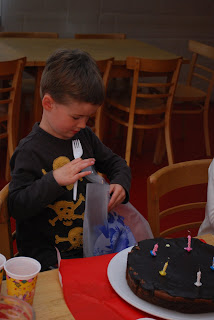 It appeared to be 'iced' (I use the word with caution) with Nutella, and those candles have been recycled many, many times. I am pursing my lips.

"It's not even your birthday! I made you that Pokemon. And Fingers had the parrot AND the piñata. Anyway, they give you one at Kids Factory, it says so"

"Ah! But do they know what Pikachu looks like?"

Anyway, I deleted the romantic 'femme meets gâteau' shot, because it showed my double chin so you can't see it. But you can see this one where I am staring out of the single window at the driving Waterloo rain and dreaming of Migraleve and baby goats to rest my head on and a suite at Claridges filled with books and pillows. 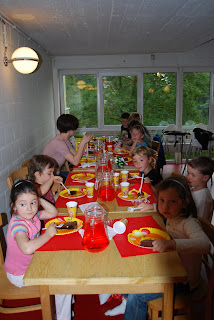 The girl in the foreground on the right is one of my future daughters in law, Fingers' "amoureuse". Both my future daughters in law attended, since it appears that one of the quirks of Belgian school is that it forces you to choose a future spouse before the age of 6. Everyone is doing it, apparently. Anyway, it gives me time to quiz them on their career plans and their attitude towards animals and cake and PG Wodehouse and the West Lothian question.

Here I am trying to trick my other future daughter in law into telling me her voting intentions. Look at that body language! I am not quite ready to welcome her into the family yet, am I? 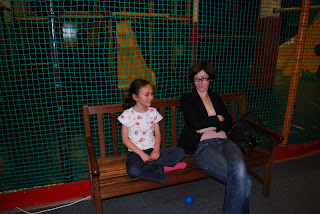 Though I will admit she is much more elegant and gracious than I am. We were both having difficulty getting into the spirit of things at this point. I think we would both have been fine with a very chilled martini, but there was only grenadine and menthe à l'eau. This is decidedly not a nice photo of me (I suppose marginally better than the one of my oversized nostrils) but the pose made me laugh too much not to include. You must understand that I am 35% mojito, 40% garlic, 15% Nurofen Plus UPDATED: and 10% STUPID in this photo. It's not a winner.

Anyway. Everyone who was supposed to have fun had fun. There were virtually no tears and we did not lose anyone or anything. I did not spend the whole time having chest exploding palpitations about my elaborate party planning getting fucked up. There's a lesson in there somewhere but I will almost certainly fail to heed it.

*Does the name not say it all? It does.

Absolutely wonderful photos. I particularly am impressed that Belgian children eat cake with a fork, even without parental pressure. I also adore your humorously quizzical expression while interrogating that elegant little girl. I'd welcome her into the family, if I were you.

My sister-in-law once exclaimed, happily, at tea "I love bought cake!" Since her mother had spent the previous 40 years lovingly baking for her family and had just provided a Cadbury's cake for the children (as well as a home-made one) for once, she was a little put out.

BRAVO! Your children will adore you FOREVER. Or at least two hours, which is basically the same since they all have memories like fish, apart from the wounds you applied two years ago when you made them wear girls hats and they will remember that until they are aged 99.

The last time we attended one of these horrible ghettos of fun we took all our own food and claimed to have various allergies that meant we could not possibly part with the shedload of cash required to buy a cold baked potato at their fat laden cookhouse. I recall declaring 'I am allergic to gluten' with a home made buttie in my mouth but reckoned the Saturday girl wouldn't dare face me out. i won. as satisfying as not seeing your own children for 2 hours.

(this comes from a place of love)

Brilliant post, photography just keeps improving, am hoping for tv show one day? That would be super non?

She= Carla Bruni-sarkozy
You= pope john Paul après stroke -ie obviously not in a good place.
(that's the part from the place of love)

Am horribly excited about tales from la boum (is it boum? Or boom?) tomorrow. It shall doubtless be pinnacle of day.

Wow, they're all so well behaved or did you glue them to the seats. You covered all the bases - cake and activities.
I must admit I hated birthday parties when I was little. Mine or anyone else's. Didn't know what to do at them, wandered around bored most of the time.
Now I love them (obviously adult b/parties not children's) - maybe it has something to do with the fact that large amounts of alcohol are served.

So. You've left us on tenterhooks.

Good to find your blog -- I have a very soft spot for Belgium in my heart. I'll enjoy following your adventures in Brussels.

love you and the prospective daughter-in-law..
you're really working the mother-in-law casual disinterest/mild frostiness..
talk about doing well for themselves though - fingers and lashes both have good taste! how chic and cute are those two little girls?! wish i had that poise at such a young age.. i wish i had that poise now!!
can't wait to hear about the neighbours soiree though x

Expateek: the final 10% = stupid. DO pay attention!
Jaywalker - I so like that picture of you. Please come and meet me when we are back in London. Bring your boys to play, eat chocolate and bring your laptop. I am drunk (farewell dinner with friends we'll probably never see again) and gushing inappropriately but WTF, what you can't say at midnight on the Internets is not worth saying at all.
WV = blogeste. What is THAT all about?!

Congratulations! You have checked off birthday parties for your offspring. And you provided well-appreciated child entertainment for all those other kids, and gave their parents a couple of precious hours off. Good for you!

I agree about the lighting in the indoor play spaces. But I also will cop to envy -- I wish there was an adult sized one that I could climb, slide and bounce in.

The Belgian version looks far superior to Chuck E. Cheeses, a hell I was subjected to only once.

Z - yes, she is really very lovely. I approve, but I can't let on, of course. I can't get my head round the fork thing.

Grit - that is very cunning. I think in Belgium you could bring your Fortnums hamper out with real champagne flutes and noone would care. Indifference is all.

Wafflechild - I pine slightly for the fandom of old when you were cravenly flattering. Now you have bought me a bacon sandwich you feel you can liken me to stroke stricken POPE, whilst all the compliments are now directed at Mrs Trefusis. How sharper than a serpent's tooth etc etc etc (though the image is very accurate. That is exactly how it felt.)

So Lovely - I know! They were actually very good. I wonder if the rum vapours coming off me subdued them?

expateek uuuuuuuuuurgh. I have updated. I honestly thought that added up to 100%. Speechless at own stupidity.

tragicanon - they are both rather wonderful. Lashes has his pick of the gurls for some reason and is always being chased, but has stayed faithful to Lea since the very first year of school. WEIRD.

WIfe in HK - yes! Drunk commenting! Of course we can meet up. I am always scheming to get back to London.. Have you somewhere to live yet?

Nimble - Whilst I agree in principle, I am wary after getting terrible friction burn off a plastic slide in the Clifton Moor Wacky Warehouse a couple of years ago....

Janet - really? It gets WORSE than this? Brrrr.