The school fête and associated whingeing

This is in the way of being a shitty narrative post, since I am broken. You will have to excuse me, you will see why below.

You know, I'm torn as to quite what the worst part of today was. There are lots of contenders.

I have been up since 5 (because that's how I roll as described recently), and because this happens all the time at the moment, the cumulative effect is to make me feel like someone has helpfully sanded my top ten layers of skin off with fine gauge sandpaper. They have gone even more heavily on my eyes and ears. I am RAW. Noise is a cruel assault on my sensibilities but unfortunately none of Oscar, Lashes, Fingers or the CFO appears to have received that memo. Indeed, one might surmise that they have received an alternative memo, stating that the family who shouts loudest has the greatest and most enduring mental health. At seven I was worming the dog just to grind some meagre satisfaction out of my morning.


First, the CFO chose today to undertake not one but two demented household projects, first moving all stereo equipment from one room to another, then taking down and washing the most complex set of blinds on the planet. The stereo equipment task involved - swearing, dust, displacement of cupboards full of shit that were JUST FINE where they were, 'testing' audio quality at ear bleeding volume and unplugging the internet. The blind task involved becoming bizarrely tangled in a spider's web of differing lengths of string that had to be held in a particular masonic formation, whilst balanced on a window ledge. Only the thought of breaking several limbs and not being able to go to London kept me hanging on to the frame with my fingernails.


In the background the children tried to remove each other's heads with discarded power tools all the while repeating at nauseating volume 'C'est la fête de l'école!' (yes, as if I would ever be allowed to forget it). In the ensuing chaos Oscar was able to climb onto the kitchen worktop and eat a whole packet of parma ham. We had probably reached about eight thirty in the morning by then. I was then given a brief moment of respite to go and fetch some dry cleaning and take out giant amounts of cash to haemorrhage at the school fête. I think we can safely identify that, and now, as the high points of the day. I tried to hide for ten minutes to gather some strength for the trials ahead on my return, but was tracked down to my bed where Lashes performed a two kneed wrestling jump onto my rib cage.


Next, the school fête, cinema themed, was blessed with frequent freak rain showers and some terrible outfits including a woman in a dressing gown with a grey wig on being Cruella de Vil that really caught my imagination. The headmaster, however, was elegance itself in a tuxedo. I tried very hard to take his picture for your delight, but the CFO was censorious and confiscated the camera, citing 'low battery'. The school fête format is that you wander around the schoolyard like a lost soul parting with your money and occasionally file into the sports hall to watch some excruciating dance routine. Even parting with your money is not made easy. You can't simply pay for stuff that your children are chewing your ears off about, nooo, that would be too easy. First you must queue up to buy a piece of paper in order to buy things. The pieces of paper come in three or four impenetrable varieties and whatever you want to buy, you can be confident that the one you chose will be the only one that doesn't work.


If I tell you that Fingers' dance routine was performed in swimming trunks and goggles to Erasure's I Love to Hate You are you getting a slight sense of the overwhelming weirdness? Oh, I probably have pictures. Hang on, here you go: 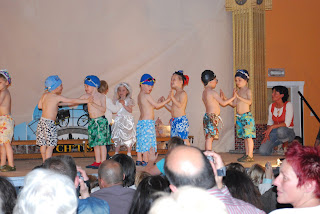 (There was a girl in a wedding dress too, yes. Not explained; nothing was even remotely understandable about the whole business).

Lashes got off more lightly with High School Musical. It was dire, but less eventful. Look how much he is enjoying himself: 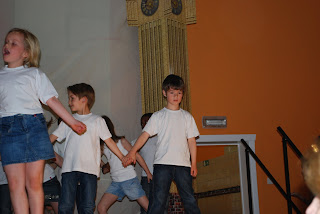 Once immediate parental torment duties were over, we were released to sit in the schoolyard, shelter from the rain and hand out €20 notes. There weren't even any good cakes. Back when I was a moderately enthusiastic parent, there would have been several dozen appropriately decorated and glittery fairy cakes from me. Thankfully I have reclaimed some scrap of sanity and no longer go in for this kind of thing. Instead there are long bamboo skewers with dozens of Haribo sweeties stuck on them, the famous 'brochettes de bonbons'. The ideal playground snack, they combine the rocket fuel hypermania potential of sugar with a pointy offensive weapon. All this for only three squares of your yellow paper, or one blue and one green but absolutely not, under no circumstances the red paper.

On the way out, removing marshmallow remains from my trouser leg, the two bouncers - proper ones in those shiny silk bomber jackets and shades, built like frietkots who were manning the doors (like anyone would go if they weren't bound by ties of blood to do so) asked me why Lashes' coat was ripped.

"I have no idea. He probably fell over something. He often does"

"You did it madam, didn't you? Parental violence is endemic"

"Don't be ashamed madam, you can speak to the school's pyschological cell"

"Is that lady your friend? She should come too. It's a hard subject to speak about. Shame is rife. The first step is for you both to admit you have a problem. Come on, both you ladies should come along"

Weird double act. Weird day. It's half past ten and the CFO is trying to set radio stations on his new audio palace, again at ear splitting volume. Saturday, you have not been kind. I am putting you out of your misery even if it means leaving this post like the halfhearted heap of shit it is.


[M made me promise not to write about elephants, but she has gone out and I MUST tell you that finally things may be happening with Phyo Phyo. The website says "Phyo Phyo excrète du mucus" which has to be one of the odder sentences even I have written. Watch this space! I will fill you in on entertaining keeper incompetence as and when it happens! ]
Posted by Waffle at 22:53

OMG. Can't the Hague intervene in these situations? You poor thing. I must admit that I had a brief stroke when I read about the set of blinds that has to be taken down for cleaning because that particular project is awaiting me as well.

This post was so surreal not sure if it's fete or post-eurovision drunkenness. Thank you anyway for contributing to my delirumumem. I wioll regret this comment in the morning but shouldn't think too far ahead

I simply must visit Belgium. It sounds like something that must be experienced to be believed.

It’s so nice site. We love to see more on this site. Keep on updating… MonkAreRee Bali ***ehmmmm

your fans are getting crazier/ whats with the Monareebali eeeeeeeeehm? im too scared to click

Dude, I thought we had an agreement. Deux heures de colle samedi matin for you young lady.

Would I be spoiling the air of surreality if I asked for a clarification on the bouncers? Were they part of the movie theme, or does your school have real (or imagined) security issues?
Word verification: "loitylaw", which seems apt somehow...

Roll on London. It sounds like you need the time away. Your writing will carry you. I feel sure salvation is at hand. Good luck and best wishes for your brother.

High School Musical... argh. I would be looking about excited as Lashes does.

I hope London is good, I too send my best wishes for your brother.

Wow. Belgium, I love you! Hilarious. You must be all wrinkled (from all the laughing) and bruised (from falling off your chair). I certainly am. Thanks!

Oh poor you. I think you are terribly brave. I would have eschewed my parental duties and sent the CFO on his own if I had been you.
I'm unreasonably excited about the Belgian baby elephant. It looks very cute!

That fete sounds hellish. What petty bureacrat decided that cash wasn't good enough? Also, at least at an English fete (medieval jousting theme at ours this year) you will get some nice cake.

I love your blog.

Dare I say it... the school fete worse than death ?

We had one also this weekend... happily escaped OD on e-numbers as the 'barbe de papa' machine broke down.

One brilliant father smuggled in some hock porto from his home village so actually have nothing to complain about, it's all a blur.... If you like, I will put you in touch with him.

Gawd - that school fete sounds like the Lobseter in the nativity scene from Love Actually!!

IT'S BORN! WE HAVE A BEBE ELEPHANT!

And there's live feed too

My cup runneth over