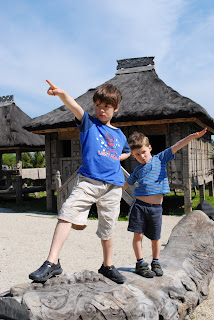 I know noone really understands my passion for the bat caves, but they really are quite extraordinary. Of course, I should explain that whilst there are bats, that is but the tip of a very Belgian iceberg. There is pretty much EVERYTHING. And lots of it just wanders around unrestrained, because they appear to be poor at fencing. 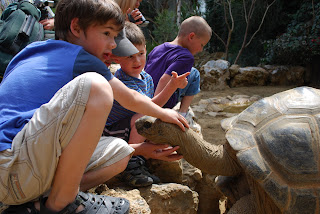 One more for scale: 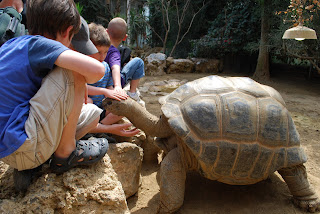 Can you feel the pure joy emanating from the CFO on these pictures? I can. He would have liked to stroke its neck all the way back to Uccle.

Here, also, Fingers is pursuing a Small Furry Thing, found lurking free range near the pharaonically enormous and pointless temple. If you have any idea what it might be, do let me know and I can ring them up and explain laboriously what animal they have lost this time, not that they care. 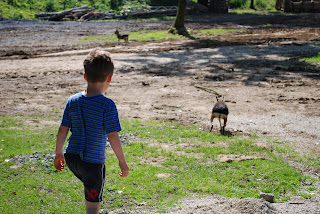 Incidentally, you will note that Fingers has been on the receiving end from a haircut from the terrible Barber of Uccle, whose only qualification to describe himself as such appears to be one of those stripy poles, a pair of scissors and profound misanthropy. He looks like a tondue from 1945, all bald patches and tufty bits.

There was also an interesting moment when a dik dik, or something very similar, escaped and frolicked round the shack where a dour man was barbecuing sausages for a cast of thousands. It ran very fast in circles for a couple of minutes, jumped gracefully over the discarded ice cream wrappers and disappeared in the direction of the gift shop.

The reptile house is of course a highlight in my family. 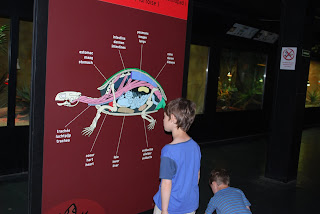 Children not, I hope Getting Ideas. 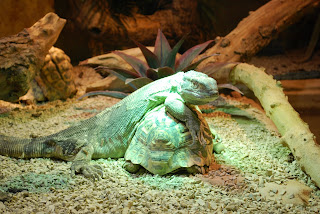 Lashes made me take a picture of this. I think he thought they were having sex. He has hit an interesting new developmental stage where le sexe looms large, accompanied by graphic hand gestures that I doubt he actually understands. He explained to me what two dragonflies were up to with a sort of finger plus fist gesture that left little to the imagination.

"Do you think we need to TALK to him?" I hissed to the CFO after reporting back.

The CFO looked unmoved. "I am sure he has learnt everything he needs to from les grands at school".

I tend to agree. After my attempts to explain Tampax to Fingers, I feel I should be removed from all sex education discussions forever. If my children are to have any chance of having a fulfilling sex life somewhere along a spectrum broadly defined as normal, they are probably better off learning something far fetched from some smart ass nine year old.

I still have penance to distribute and will do so later today. Otherwise please keep me in your thoughts as it is a long weekend in Belgium and there has been serious discussion of going FISHING tomorrow.
Posted by Waffle at 18:54

My, those boys sure know how to strike a pose.

Luchtpijp is pretty much the best word EVER for trachea. Fucking GREAT! I'm going to say it in any situation possible. 'I got something in my luchtpijp' or 'What happens if you press on your luchtpijp?' or 'You've got a very nice luchtpijp!'

Are there any poisonous reptiles at the Bat Caves? Or should I ask if there "were" any and if so, where might they be on any given day?

Id just been laughing at your funny post as well.

Take cake. Or flan. Either should dull the pain of the fishing and if not can always be used as bait.

LMAO at the thought of you fishing. Quelle horreurs!

This is the third day of that long holiday and I'm so bored that I'd even consider going fishing with you.

Flan sounds good, somebody mentioned that. I don't remember the context, except that you should bring some.

I'm so glad the tortoise didn't chew off your son's finger.

The mystery animals look scarily like Pere David deer, one of the most endangered species ever, but I'm sure they can't be. Jaywalker, you write so vividly I dreamt I visited the Bat Caves last night... I almost got pecked by free range ostriches. Are there ostriches? I think I would prefer giant tortoises.

i remember believing an older girl at school when she said that 'sexing' involved having a boy stroke you lightly across the belly button with the end of his willy.. now i can't help thinking, if only..
bat caves look immensely fun, and i am pleasantly surprised by the absence of actual bats in the photos.. x

Where to from here? said...

am in love with Lashes and even more now that I know we share a birthday.

With all those reptiles walking around your garden they are sure to figure out the whole sex thing very soon. However, if they do learn how to do it from turtles...might prove rather alarming in the long run.

I long to visit the bat caves. Not only is your passion completely understandable to me, but I can't believe there is anyone who doesn't share it.

I don't think real fishing can be as boring as this book:
http://en.wikipedia.org/wiki/Trout_Fishing_in_America

I read it aged 7, when I had already read all my books, my sister's books, my brother's books and my mother's books. In a state of emergency I was forced to read my Dad's book - and apparently I complained it was very, very boring and had too much sex.

Hope you have fun fishing, or perhaps you can creep back to the bat caves while they are all ditracted with flies, maggots an STUFF.

Fishing? FISHING! Please, no! Found a dead bat in my laundry pile yesterday. It makes a change from snakes. I'll shortly be sending you chick on my blog so bate that breath! VLiF

Juci - it was entirely their own. I just told them I wanted a picture of the wooden crocolizard.

@eloh - I can't imagine what you could possibly mean. Will I empty my pockets? No, how dare you!


Lulu - dark days in French history. Lots of them.

PM - There was a cafe, which helped marginally. But still!

Gossamer - it was a very friendly tortoise indeed and showed no interest in fingers. I would totally have helped the CFO to steal it.

Provincial Lady - there are, of course, ostriches. Actually we were complaining about the profusion of Large Boring Birds. They should let some kind of large predator out to eat a few of them.

tragicanon - this would totally work for me as I have no sensation at all on my stomach since tummy tuck. Excellent.

Where to from here - I am tempted to tell him, since he needs a morale boost, poor deaf poppet.

3limes - hmm. I would not trust the tortoises to be capable of reproducing. They seem to defy their evolutionary success every day with their mind numbing stupidity.

Z - come here and we will arrange a field trip! It is truly wonderful.

fabhat - yes, that looks equally awful, but in a different way. Badness.

JN - funny. Fingers trying to emulate his brother and ending up looking even funnier.

That is the most relaxed iguana ever.