I am spending the week with Fingers whilst simultaneously trying to keep up with my ennui duties, due to being too lazy and half arsed to find anything for him to do this week. It has started well.

"Have you washed today?" he asks me as I block his passage to the world sugary cereal mountain and force him to give me a squeeze when he comes downstairs.


"Oh. Maybe it's my jumper?" I suggest hopefully.


"No. Your jumper smells nice. You smell bad".


"Do I smell worse than Oscar?"

"Yes. But first make me petite crêpes with Nutella"

He's lovely company, if a little imperious, and we share a love of frequent biscuit based snack breaks and poking the dog gently. He has a way better work ethic than I do though. As I write he is industriously making an ant hill in the garden with a stick and the mighty force of his will. He has already steamrollered me into giving him pretty much everything he wants. I fear slightly for the rest of the week. We have made a firm date to go to the Scary Bat Caves (home of the escapee capybaras) one day, but apart from that I think I get to dance attendance on him, holding out a variety of beverages and biscuits with faces.

Lashes drew the short straw this week with compulsory attendance at the Stage That Is Not Butch Enough. Today he told me with total despair that they had cooked something with chicon, tomato and cheese (the trifecta of terror!) and he had been forced to taste it. He has been tight lipped about what else was involved, but having seen the medieval cowhide footwear and drapery the tremendously enthusiastic be-scarved organiser women were sporting, I fear kickboxing is unlikely to form a large part of the curriculum. He looked at me like this: 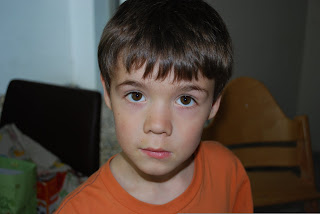 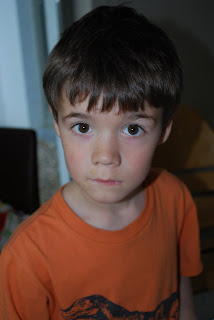 but it won't get him anywhere. One chocolate wafer eating zombie child in the house at the time is plenty.

Fingers, sensing his inhabitual triumph, prances around plucking dandelions, playing with the elaborate chick playground the two of them have constructed from a loo roll, some feathers, an old pencil and some elastic bands and wrapping Oscar in my cashmere scarf like a particularly daring Isadora Duncan, fluttering his fingers and singing small songs.

Occasionally he stops to tell me something, often about snails or clouds. Or what ended up in the hedge one Tuesday in November and whose fault it was. Or this:
"Mamie told me she thinks I am ten times as beau when my nose is clean". 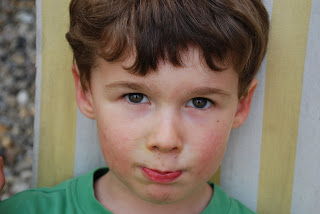 (Blogging will probably be rubbish as a result for the rest of the week. Except for the bat caves).

It cannot be true. I like hearing about the crazy things your children do. It makes me feel that my children may be able to have international pen pals with similar proclivities in later years. It gives me hope. We had a 'chick hotel' last year. They had designer nappies so they wouldn't crap on everything. They also had the toilet from the doll's house as back up.

I wonder why a lot of my children's play centres around the world of pooh?

Both of them are so cute!! No wonder they can make you do anything for them!!
I hope you do blog more about their exploits for the rest of the week!

I love it when you write about your kids.
We can sense that you really know them and are not from the my child is perfect school of competitive parenting.

Your boys are mesmerizingly beautiful in oh, so many ways, JW!

They are very much your sons, non?! Have a great week of rolling bats and poking cats - Gently, though but!

Bat caves sound wonderful - I am looking forward to that. What does mamie know? Dirt is good for children. They said so on the BBC this morning so it must be true.

What a couple of gorgeous boys, dirty or not!

They are very beau, dirty nose or not.

Oh gosh you've inspired me to just feed biscuits to with no more fuss. I've been strained by weekend with in-laws and suddenly my little delight and I are bickering child v parent pointless bickering. I need to allow him his indulgence again!

Get with it Mamie, nose wiping is so last year. As is washing.

Fingers reminds me so much of my Sugarbear. Imperiousness personified. I find that that I can keep the peace as long as I submit completely, tout de suite. Which of course I forget to do.

I can't WAIT to read about the bat caves.

there are hours of delight to be had watching small children find routes for their fingers and tongues up their own noses. enjoy!

How completely delightful to share biscuits, dirty noses (etc.) and industrious aimlessness with small children. It serves as a timely reminder that our own schedules, clocks, and ambitions are ridiculous rods we invent for our own backs. Enjoy yourself with your treasure. How lucky you are. How blessed.