I am starting to think I may be a panda. I already have the impressively low libido, and now, watching this clip (watch the clip. You have to watch the clip. Just the first minute - by 54 seconds you've seen all you need to), I discover that "Pandas must avoid energy sapping encounters with other pandas". This would explain why I am developing the classic home worker's aversion to leaving the house, which combined with my phone phobia adds up to panda-dom. Then, when I saw this clip, and the pathetic squealing creature, unable to summon the energy to climb a flight of stairs, it was like looking a mirror (without the whole, adorable, furry thing).


The parallel is imperfect. Firstly, the reason the panda must avoid "energy sapping encounters" is its low calorie diet. This is not a problem with a diet of crème caramel and mini eggs. Second, the cuteness. I am not cute, though I would like to point out that today I have washed and dressed. I even found some moisturiser when I was looking for my cash card (no, no luck)


You have by now watched the clip (yes, you have. If not, go and watch it). I would like to posit a theory that Twitter and Facebook are the human equivalent of pandas rubbing their bits against a tree. The panda, the soporific voice of David Attenborough murmurs, sniffs the tree trunk for signals of what has been going on in its peer group whilst it has been dozing and chewing bamboo in its stakhanite fashion. Rather than going and interacting with actual other pandas, it just sniffs the tree. Then, it, in turn, rubs its head or bottom, depending on how athletic it is feeling, on the tree to leave its own "message" for the group. You see where I am going with this? If I were Alain de Botton, someone would pay me to write a book about this. You KNOW it's true. It would be called something like "Bamboo generation: how panda social media is killing conversation". And there would be a soulful author photo of me, bald, ponderous and bespectacled, looking like someone who was frequently placed in bins by bullies at school, holding out a shoot of bamboo.


Now here is a picture of some Belgian graffiti, so we can pretend I have left the house today. 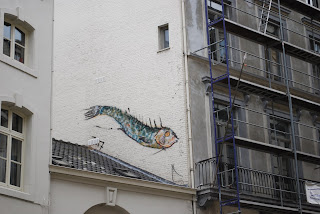 If I put two pictures, you'll think I went out twice, right? Look, this one is taken from veerrry verrry far away, as if , say using a telephoto lens out of a window, say, maybe from my front room? 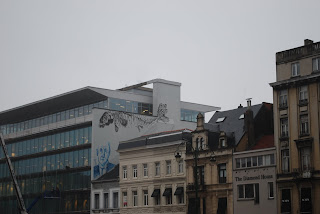 Shackass, hoist by my own petard.
Posted by Waffle at 16:39

1. Baby panda on stairs sounds disturbingly like tortoise with affection for boots

2. Have you considered that the CFO may have secretly confiscated the cash card after the whole "How did the account suddenly lose €3800?" conversation?

3. I was supposed to haul my ass all the way to Clerkenwell (three miles at least!) today to review contact sheets and select the images for fine art prints that really MUST be done QUITE soon. But then it started misting. And though I was bathed and dressed, I chose a blanket and a comfy chair, and here I sit, rubbing my neck on the tree... Words exchanged with actual humans today? 0. But I won an online contest, so hooray for me!

I had a vision of myself staying in bed today, rolling and wrapping the comforter around me and wriggling all over to get a nice warm comfy spot. It lasted about 5 secs. Then I got up and I'm at work 'talking' to you via the internet!

That's very intelligent graffiti. It's hardly PANDA-monium around Brussels, is it??

I was about to post a comment about Pandamonium, but shackass, I've been beaten to the draw.

Too energy-sapped to think of anything clever.

If you are giant panda of black and white variety, can I be red panda? Not because I have particularly researched its behaviour or anything (do know it is shy and nocturnal) but because it is very cuddly and outrageously cute and everybody loves them. I aspire to be like this but have to admit get further and further from this goal each day. Part of having children was to ensure that some people would HAVE to cuddle me, at least for a few years.

now what is the origin of the word Shakass? my french ex used to say it I think, or in anycase, I used to use it fairly regularly when I could still speak french. Now having like you not left the house for a year, my French is somewhat stunted altho I havent started saying ZUT yet. I thought it was Chagass which is an EXTREMELY rude word for a woman of ill repute down here in the south of france...the difference might be in the G sound....is Shakass the belgian equivalent of putain (exclamation)

Shakass, stop rubbing your ass on the tree and help me. I have posed a question in my blog post today, and you can help me, without getting off the computer.

Sorry, that was just me rubbing my arse on the keyboard. Curiously ineffective.

I love that Google, me!

With all thy gairish pageantry and noise,
Pennon, and plume, and oriflamme unfurled

I envy not thy toys ;
For thoughts that sting the brain,
On that dark brow are registered in guilt ;
And thy poor heart is wrung with many a pain,
Smile, maniac, as them wilt.

Thou of the eagle eye,

In the red chariot of conquest drawn ;
Cursed by the widow's and the orphan's sigh,

Pass in thy triumph on !

Oh my gawd. You're right. Now I have an itch that must be scratched.

Welcome to my world sweetpea. LLGxx

Wow. Belgian graffiti kicks Los Angeles's graffiti's ass. Usually our graffiti consists of a random grouping of 4 or 5 letters into a nonsensical word, like "Crake" or "Womo" or "Grong", sprayed onto buildings and bus stops. We never get fish or anything. *kicks dirt* No fair.

Well observed! The world of the Panda has much to offer. The first clip explains much of the arse rubbing on Twitter and the occasional pieces of gold that flash forth from the more intelligent (and at the risk of becoming bald) head rubbers. The squealing baby Panda clip is a gripping metaphor of a first time novelist trying to get a book published.

In case you're wondering, that graffiti is by Bonom: http://www.laid-back.be/gallery/bonom/bonom.htm

I didn't know Michael thank you so much. look people, lovely flickr graffiti .

I too try to avoid energy-sapping encounters with other humans, but sadly it's not because of my low calorie diet.

AQ - I am jealous. I have been trying to win that competition for DAYS. Grrr. Thank goodness you took that thing for me. You know what I mean.

Pochyemu - you are ON FIRE

Mr F - you haven't been trying to interact with human beings have you? You need to watch that.

Mothership - those are total fakes. They are not pandas at all; they are just foxes in fancy dress. You are way cuter.

screamish - I had no idea that anyone other than the CFO used it. I can't believe it. Goodness.

GingerB - I have been over but I got stalled at the comparative duck/cow sizes and then I was all hopeless and incapable of working out whether cold water was good for breasts. I shall update you this weekend.

Woman - have you been at the Harpic again?

Lisa - I had a shock of recognition when I saw that lazy, shaggy ass creature lumbering up to the tree. It was humbling.

Evitchka - I knew I recognised him. That's depressing. But also cute. At least we are cute. Right Evitchka? RIGHT?