In which I fail to have an entertainingly awful time

We had a good time in Spa. How boring is that? So I had to force the CFO to go to what was optimistically described as the "Antiques Fair" for cheap visual laughs. It did not disappoint. 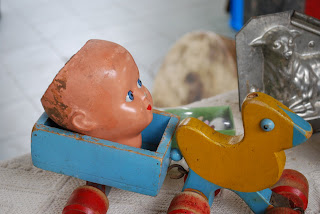 I took a picture of this delightful tableau initially that I was very happy with, but when I showed it to the CFO he said, "no, you can't tell it's been scalped. Do it again". I love how he is always striving for excellence. 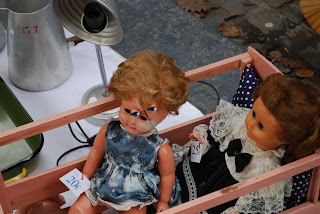 Again, here he said "make sure you can tell those are its eyes". 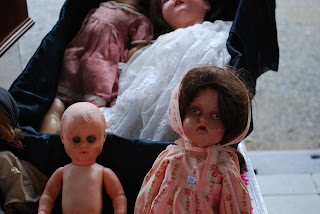 This one is specially for Antonia. These fuckers are up to no good. They are plotting their next armed raid on the local night shop. 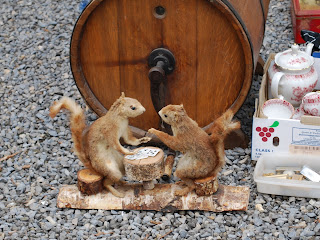 In the end the joke was on us, when we both ended up buying things. I bought a plush Bulbasaur. €3. (CFO: "you HAVE to negotiate! Otherwise you aren't respecting the marketplace! It's disrespectful to accept his first price!"). Then the CFO bought a slightly too small all in one motorcycle waterproof suit thing from a decayed gentleman who looked like Serge Gainsbourg's more disreputable (yes, imagine) brother. For €15. (Me: "did I just imagine that conversation about my Bulbasaur?"). We placed the Bulbasaur on top of the tv and it looked witheringly at us when we watched shitty tv. I barely missed Oscar at all as a result.

The Spa of Spa was peaceful and beautiful. Look! 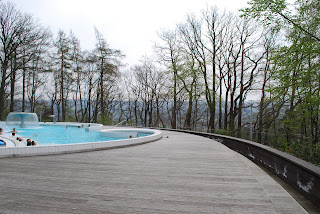 And the view from that pool thingy: 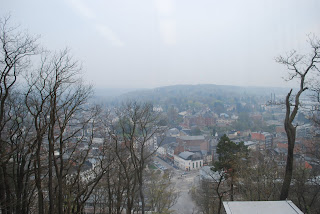 Look. Misty. Atmospheric. It felt a little like a nineteenth century sanatorium for consumptives but with more heavy petting. We were both astonished by how apparently arousing the spa users found the facilities. " Eeeeugh. Do they not have hot water at home?" I said with the classic British combination of disgust and compulsive curiosity, peeping through my fingers and grimacing. "Imagine what Friday night must be like" said the CFO shaking his head grimly.

Imagine, indeed what the "Cérémonie Inférnale" in the Sauna Naturiste might be. Or not. 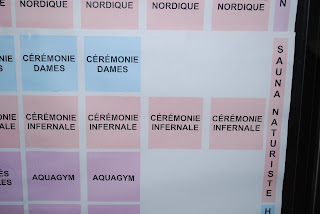 There was one tricky moment when someone's sticking plaster ended up stuck to my finger. Brrrr. But the quasi-miraculous appearance of a temporary cocktail bar serving violet mojitos ably helped me forget Plastergate, and several of the less well-advised pairs of swimming trunks on show. The nudists had their own section behind a large metal gate and the CFO could not be convinced at any price to go and peep.


"Because I am British and am therefore simultaneously repelled and pruriently fascinated by nudity" I should have said. In fact I said "moi non plus" ('nor do I') and shut up, regretfullly.


Given the absence of nudity, fighting, or other noteworthy hideousness, I felt compelled to take a picture of this packet of cakes. 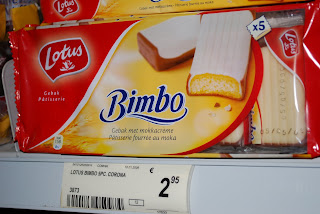 Never mind the Spa, you could set up an alternative Euro Disney with those mutilated dolls, toys etc. ££££ I think

Those dolls are...grotesque. With the emphasis on "grot". Also, I'm sure the squirrel on the left is hiding an ace under the table.

In my mad hurtle to read to the end of the post, I zipped through the CFO's comment too quickly and came up with "That's strange, I view it strictly on the internet!"

Read, read, read... WHOAH! BACK UP! THE CFO LOOKS AT NAKED BODIES ON THE INTERNET? Mah Gawd!

Oh phew. Maybe not. Or, perhaps, none that he's admitted to... yet.

Be grateful you could see they were wearing unfortunate swimwear. I have seen instances in the Turkish Baths where the overweight "overlap" was so large you could not see if trunks were being worn. Oh, so wish I hadn't remembered that. I must go and lie down.

"Plastergate" - thats fantastic and hideous at the same time. I would have been obsessing for hours, as to where that plaster had been before my finger.

Those mangy squirrels playing cards give me a sense of deja vu that I can't identify...repressed childhood memory?

The ceremonie infernale seems to have taken possession of my mind. I found it hard to concentrate after that, though like Expateek I thought for a moment that the CFO looked at such things on the internet. I think I am going to have weird dreams tonight.

Iheart - are they recreating that Cézanne Card Players, do you think? http://www.bc.edu/bc_org/avp/cas/ashp/ilium/images/cezanne/card_players_lg.jpg

I've had a boring weekend of trailing round family-friendly parts of London along with every other middle-class middle-aged twat and their tetchy child. I'm glad Easter is over. I wish we'd had an Esater beard. A big one we could all climb into.

I'm another one who read that the CFO looks at nudity on the Intarnets - good thing I re-read that part. On the other hand, that might have been an interesting insight into his mind...

Good god, those dolls are hideous. It reminds me of some terrible psychological thriller on the t.v. when I was a kid. It all took place somewhere on an island off Norway and this total loon of a woman kept all these creepy dolls in a room and had mental conversations with them before killing everyone in their beds.

Thanks for provoking that long repressed memory.

What with that, the squirrels and the plaster I shall be up until dawn.

Those dolls are the stuff of 'chucky' dreams. I hate those type of doll, they are just plain creepy. I feel sure that Stephen King keeps a plethora of the little bastards sitting on his desk to give him inspiration. Especially that scalped one. As a fellow Brit, I understand being repelled by something and simultaneously curious. It's how I ended up living in Australia.

I have an artist friend who combines doll parts like these with egg beaters and plastic meat in sculptures, that he sells, for money. I won't show pictures unless you are already on sleep medication.

You are so very, very brave to have handled Plastergate with such grace, and no vomiting! See, a break was just what you needed.

i just stumbled across this and thought of you

katyboo is referring to maelstrom. I posted about it ages ago - might re-post for her amusement. As usual, Jay, you paint a very endearing portrait of the CFO. I KNOW that it's not all plain sailing but I always come away from your blog thinking how nice he sounds. You must be doing something right. I am very glad that you had a good holiday and that you found those horrible dolls to show us. Finally back to a decent internet connection here - YAY!!!

I will deny all so please don't try to trace this comment but I LOVE Spa! Ooh yes, all that white, scrubbed organised Germanish (yes, it's a word) fun. And the little old lift! And the white robe and clippy cloppy white slippers - what's not to like?
Why oh why was I not born German? Would it be too weird if I just faked the accent?
Love your blog, by the way. Very funny, Alex

Love the mutilated dolls - need to buy the plotters and set them on the in-laws.
Yes what is the draw and draw back of being British and voyeuristic about nudity only to grimace!

Please don't fall into the trap of believing that only the bad times make for interesting posts. I'm glad you had fun and you still make mutilated dolls, stuffed squirrels and stray plasters sound funny to us.

I can't believe you couldn't bamboozle the CFO into "accidentally" going into the infernale zone of nudity. However the freaky dolls do make up for it. Good holiday does make for good blog...

sounds perfect and normal and not at all you - have I really been away so long?! Of course the plaster incident was well handled - I once worked for a well known manufacturer of posh crisps and one of the complaints that came through was of a plaster which had gone into the machine and for all the world looked just like one of the well seasoned crisps - sadly this meant the person only identified the issue at the first bite........issue being that the plaster should have been blue and therefore easy to identify? t.x

Mr F - those bastards are capable of anything. Don't take your eyes off it.

Expateek - ha! Do they come in Excel?

Titian - yup, that's a pretty image you have there. Thanks.

So Lovely - It took a lot of alcohol to short circuit those thoughts.

Antonia - not weasel worthy though.

katyboo - it is my very great pleasure dearest.

awakened heart - it's sort of our own faults then. damn.

Ginger - I can't resist that challenge. SEND THE DOLL HEADS.

Screamish - I read that in a lot of detail and then had to slap myself hard not to retain it. My god. Poke-litcrit! A whole new genre.

Alex - it's great isn't it?? But how come still so shiny and not mouldy? I am puzzled. They should get that technology working on, say, the Brussels metro.

aghtheinlaws - we have to be repressed and find bottoms funny. It's the core of our national identity.

Wife in HK - I feel a bit boring all round at the moment. I am in a lull. Bah.

Fabhat - there was some SERIOUS fencing. And signage. It would have been hard without fifty three more mojitos, sadly..

Oh, fie! Not venturing into the naturist area. Nudity is good for you; all that fresh air cooling the parts one otherwise swaddles in cloth to get horrid and sticky. If it was good enough for Benjamin Franklin, it's good enough for me! Besides, JW, think of the fun you could have had watching them all get grossed out at your total baldness. :-)

This was not bad blogging! It was excellent. It had everything you could want. Intrigue, sex (implied), horror (those dolls! I may never sleep again!), joy and biohazards (someone else's plaster. *shudder* Icky, icky GERMS!).

The "simultaneously repelled and pruriently fascinated by nudity" sums up each and every one of my British friends. And is probably why I love them so.

vw - rerave - When one returns to spa, thows caution to the wind and joins in the "ceremonie infernale"