Hello clouds hello sky, in which I am overwhelmed by the joys of springtime in Brussels

Our area is what you'd call transitional, if you were the one eyed lumbering geography teacher from Quaker school. Parts of it are gentrified and full of eurodrones with nice extensions and period features, and parts are like something from a film by the Dardenne brothers. Actually, that's most of it. You've seen the pictures.
Damien's lair: 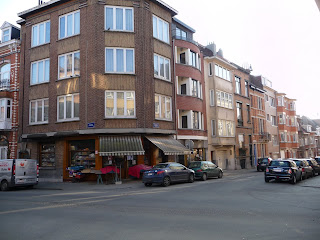 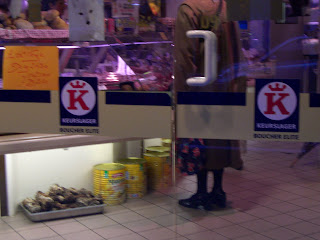 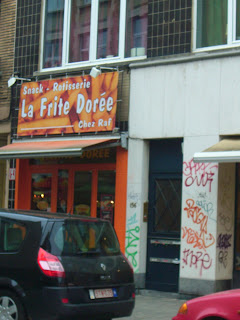 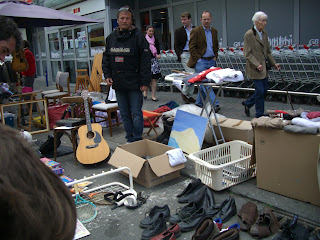 I was overwhelmingly excited when I saw our house for the first time at the proximity of shops (most houses I looked at were in the arse end of some field or other), but failed to investigate more precisely what shops they were. No matter. At least we have Zizi. And Damien is tremendously convenient, what with being three doors away and never shutting, even on Christmas day, if you can cope with the constant barrage of compliments. And there's always the barber.. 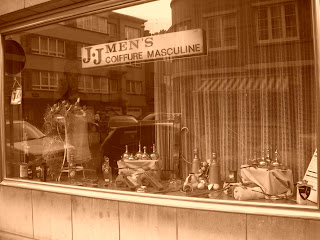 There's a big unit on the corner of our pulsatingly exciting shopping street that has been empty and in renovation for a while and I have been fantasising* to myself about what I would most like to move in there:

etc etc. The CFO tormented me for ages saying it was going to be the first Belgian Starbucks. Bastard.

So what did it eventually become? Another kebab shop. Yeah. Transitional. Dog shit, kebab shops, the surliest, greyest bars des écureuils** imaginable. Much of the time a walk round the quartier puts me in the blackest of moods, pining for Cheshire Street or Marylebone.

But when the sun comes out something oddly magical happens and the parc du caca and the benches outside Zizi are transformed into something from Un Deux Trois Soleil, or at least how I remember Un Deux Trois Soleil, which doesn't seem to be supported by anything I can find about it on line. They say: impenetrable, gloomy, weird. I remember: sunshine, solidarity, lots of système D. Anyway, you wander down the street for an ice cream, or just for air, at any time up to and including eleven at night in summer, and see everyone you know doing exactly the same. And then we all sit around on the benches watching children poke each other with twigs and chat and lounge, and everyone knows each other at least by sight and there are fifty three nationalities: There's Mami, who comes from Congo via Lyon, Dominique and Geraldine who are both 100% Belge, the Germano-Moroccan couple, the Ukrainian contingent, Frederico and Riccardo who walk the weepette sometimes (even though they are hard ass teenagers) are Portugese, the Irish woman, Cathy who is half Belgian half Chinese, the other Emma who is Italian and this week was marked, no, illuminated, by the arrival of a lovely, beautiful Mexican boy, all by himself playing with a tennis ball in the park and seducing the weepette. I went all giggly and pink.

THIS is why I wanted to live in Belgium; because most of us are foreign and those that aren't live in a made up country, and we all want people to talk to. As a stilted, middle class girl from York (most parochial and white city in Britain TM) this is just perfect. It's everything I want. The constrast with Paris, where I pounded the same paths of the Parc Monceau with the spawn every soul-destroying day, dicing with the evil park keeper and his whistle of despair, is striking. In a year only one person talked to me, and she was English. People occasionally hit my child (true! for playing with a spade that didn't belong to him), but I didn't have a single conversation. It's no wonder that after a few weeks here in Brussels I was envangelising like crazy to everyone I know about this strange, grey city.

All this to say that on days like we've had this week, when the sun is finally out and the teenage glue sniffers have sloped away to find somewhere darker and more edgy to posture, I like it here. Yay! Strike up Les Negresses Vertes! Voilà l'été (briefly)! 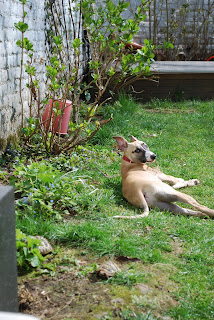 Springtime in Brussels, where black and white, Flem and Walloon, weepette and tortoise exist in peaceful harmoneeee. Until they eat each other.

*I have tried to keep my fantasies semi-realistic, so do not allow myself to imagine, say, Liberty or Browns Shoes. Besides, the unit is far too small.

** This is Waffle house shorthand for the kind of bar where everyone starts their first beer at 7 and has an obese pitbull under the table and where morose silence reigns supreme.

You are uter wet and wede. will utterly tuogh you up.

Hmmmmmm Brown's Shoes. Now I know what I can do today. Thanks! Hard to take photos there, but will try.

I hope you get your Starbucks!

Chiz
It is like Glenfield but at least you have waffles.
Chiz and fie

You make me think I would like to visit Belgium! The weepette looks so happy sunning himself. He almost looks kind of suave.

Soppy sentiment or not, I think you hit it on the head. We're all foreign, and even the ones who aren't feel as if they are. They should all be ripping each other's heads off like Balkanites, but somehow it works. It's an enemy-of-my-enemy thing, perhaps. We all have someone in common to bitch about.

despite myself I might consider agreeing with you a little bit. The sun has gone to my head, obviously.

A short while ago I heard an ice cream van somewhere in the distance. I will now go and buy some of those wee mini cornettos from Delhaize and eat all eight to celebrate. In the sun coming in the window, of course. The kids outside still scare the shit out of me, sun or no.

Whenever you talk about Paris, i miss it so... and hate it so. I'm so glad I'm not raising a kid there. The way you talk about Belgium sounds kind of like how we talk about Quebec. (They let you return things to stores! It's filled with France-hating French people! People wait in lines for the bus! And talk to complete strangers!) Ahhh the wonders of foreign countries.

Oh my GOD?! Who hit your child for using a spade not his? Was it another child? An adult? Did you stab them? Justifiable in either case. I could not actually read the rest of the piece after that I was in such a cold hearted rage.
I fucking hate Paris. Never, ever got it, apart from the pastries which are quite nice, but also never got over being forced to eat at McDonalds there once.
Ok, I'll have to come back to this later.
California suddenly looking very nice today.

Do assure me that Damien is not really evil - I send my young daughter on solo missions there thinking it must be a safe after I found out the night shop at the end of our street was held up by gun toting youths in broad daylight. I debated long and hard whether to give her training in "holdup tactics" after that. And we really need to devise a plan to halt the proliferation of kebab shops in the neighbourhood - what can we do to attract some seriously gratifying outlets?

Bath Bun - Not so much evil as despairing and sleazy, locked in that shop 24/7 with his aged pa, and no contact with women other than customers. When papa dies, I swear he will turn the place into a tiny strip joint and buy himself a catalogue bride and we will have no convenient outlet for last minute milk.

In the meantime, I think his tastes are strictly for legal females.

Also, what? The White Knight was held up?

Squirrel bars?! You crack me up. Huzzah for the sun and being able to enjoy being out of the house again! Paris is indeed a hard closed place. I'm glad you found the land of les gaufres.

Now can I have the weepette in exchange?Or Monifa?

Or London yesterday in fact, preparing for the G1000 summit, full of protesters and Police in riot gear?

I am pleased Brussels is sparkling for you today, JW, and goddess forbid you get a Starbucks - Diversity in your neighbourhood is far more interesting, a mon avis, and also according to the fortune-telling Weepette and His Tortiness, I understand...

Incidentally, I stayed in York for a week's family holiday a few years ago and found the welcome to be pretty unfriendly, given that it's such a mecca for international tourists...

Emma, once again you have done it! Have been reading you outloud to poor, poor workcolleague while we attempt not to spend entire working day on Twitter. You have made our workavoidance schedule so much more enjoyable. Thank you.

And more cake blog please. Am hoping for Desecrating Dinosaur of Doom for my own birthday.

Lucy F - but that would make me very good at tennis 'he crouch like a tiger. ruff or smooth nigel?' he sa.

Kathy - you are a magnificent london pornographer. Wonderful.

Frau - I very much doubt it, but thanks..

ali - suave in the manner of a brainless male moddle perhaps?

grapes - yes, it's weird, but works somehow. brats, yes, I believe I may have heard of those.

monk - I had a TOTAL down with the kidz moment tonight walking the weepette. Two shaven headed ukrainian hoodies came lurching up to me in parc du caca and said 'can we stroke him?' then spent half an hour chasing the dog in circles. Magnificent.

Kate - yes. Being somewhere that isn't yours is very liberating.

mothership - I have NEVER been more miserable than I was in Paris. They are frothingly psycho.

Nimble - yes. When we first met he used to tell me long rambling stories about evil gangs of marauding squirrels.

fabhat - oooh yes! and shall we stop off in the tellytubby house cafe and sit outside and eat scones? I think we should. You can share monifa.

Woman - diversity is all very well, but I want somewhere I can ask for coffee at 9 in the morning without everyone staring at me like that babycham advert. Yeah, we HATE tourists in York. We are horrible.

Lulu - once you give in to the ugly, making horrible cakes becomes second nature. Try it.

dear kindred soul, I thought I was the only one I knew of who dug Les Negresses Vertes other than hubby..yay. Spring here to in Swissland and sun and everything!! have always wondered, maybe you know, does "Mlah!" mean anything?