There is very little to say about this. The people have spoken. 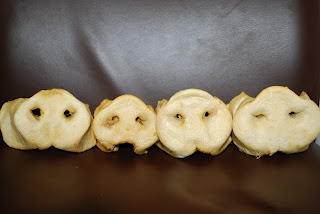 You cannot imagine the horror with which the CFO has greeted the advent of snouts in our lives.
"C'est comme un abbatoir ici!" he says, holding up ears, and gesticulating at the snouts with a buffalo hide bone. He is SO wet. What kind of Frenchman IS he? I cry fraud. 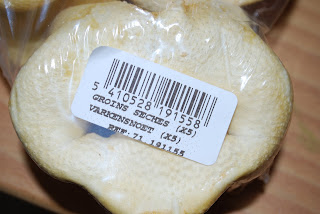 I will say that I have a sneaking respect for "varkensnoet" as a word. Ok, it's not "groin". But, varkensnoet! Jesuzeman, you varkensnoet. 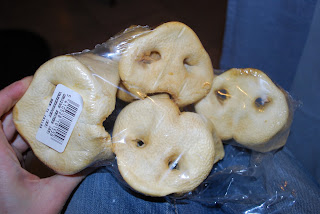 The weepette is going through a phase of intense melancholy brought on by separation from his ginger sausage girlfriend. He basically hates us all, which is fine, since it manifests in sitting sulkily in his favourite chair disdaining everything. If he had a sad, faded panda hoodie he would be wearing it. If he was allowed to eat giant slabs of cooking chocolate and drink cheap supermarket tequila with no label lemonade because he can't be bothered to find any decent mixers, he would be doing so. But he isn't. He can barely stir his sticklike legs to pee on the kitchen floor. The varkensnoets helped slightly. 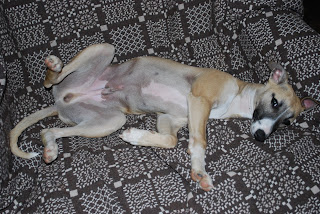 (Oscar-watchers will note that he is CHANGING COLOUR. Where did the whole, grey belly thing come from? Can I send him back? Has the statutory exchange period expired, or can I still swap him for a pony? Also, check out those downy peanuts, fellow dogpervs) 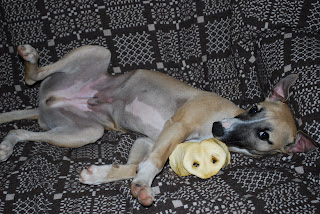 A definite lightening of the expression.
Though not here. 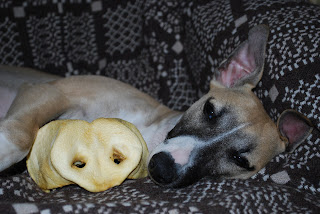 Just leave me with my varkensnoet. No, I don't want to talk about it. Just, go, OK? I'm fine. FINE.
In other news, there is no other news. The hippies have not yet killed Lashes, though they have convinced him he must never wear green as it is POISON (they are theatrical hippies). Fingers poured a whole hot chocolate over my crotch this afternoon and I was actually wearing matching underwear for once. There's probably a lesson there, and it's probably something to do with hubris. I have nearly lost about fifty three wing mirrors in my death-defying processions backwards and forwards across Brussels this week. I have not read, or written, a word all week Tomorrow we go to the bat caves.

But hey! I have found somewhere where you can listen to Sloane Crosely read her essay, The Pony Problem, all free and for nothing like. There's even a bonus YouTube video of her making her diorama thing because she is a total CRAFT NINJA. It is great. Never say I don't give you anything.
Posted by Waffle at 18:24

Labels: I am very helpful

May I be the first to congratulate you on posting dried groins in the context of full frontal dog nudity, something that has never been seen by the internet grazing public before.

I would also be very grateful if you could post one over to the UK for my dog, Bobbitt (not his real name actually but quite appropriate) who has been through his castration operation this morning and is now wandering aimlessly round the house looking for something he has lost but can't quite remember what it is. I am sure a dried groin would make him feel so much better.

I totally will Goddess. Email me your address. Who knows what customs will make of it, but the castrato deserves a treat.

Wow, that first display, worthy of a place in the Saatchi gallery.

Love the groins. Not sure about the downy peanuts. Have you tried wearing one of the unchewed groins ( like a red nose, but probably on elastic) and suprising the CFO? Think it could be fun...If you do will you post the results?

I'm beginning to feel a little concerned about you, BW. Things seem to be getting a little weird, even for Belgium. Perhaps it's time to start another cake project. No, not an abattoir. And no groins. But after your tiger enclosure triumph, something even more ambitious. Why not make a life-size replica of that bloke you like on the telly (Cedric?), and then eat him? This could be quite therapeutic.

Oooooh, I like Layla. Layla is sick and twisted. Bake Cedric and then EAT HIM? Sounds to me like the kind of dare you can't really turn down. Can you??!?

You'd have to be creative about the dangly bits, obviously, but my feeling is that Cedric/Sinclair would want you to THINK BIG.

I could have sworn his name was Cedric...this is on the Belgian weird-by-definition TV programme, right?

Isn't that a bit like the Margaret Atwood book the edible woman? Perhaps you could do it as a photo story?

Cedric was the sailor from LAST YEAR'S Nouvelle Star. I have always loved Sinclair. And André. Hmm. I think André would make a better cake. The hair. The orange tan.

Love Sloan Crosley - and because I collect (dollhouse) miniatures, love her dioramas.
I love the snouts and groins. My dogs only get big meaty bones.
I am definitely going to work "C'est comme un abbatoir ici" into my daily routine.