A load of weird crap and some bad photos.

You can see why I love him

E: But it's not allowed on our bed!

Prog Rock: Yes, but it was really enjoying itself. I think it had something to do with the kinetic properties of the mattress. It kept going round and round in small bouncy circles. Then it came back downstairs and went back to sleep.

Then he showed me a picture of a giant marrow in the Suddeutschezeitung, which I can't even spell properly. And told me about this, and this. HOW could I have missed this utterly surreal story? Is the Vatican is trying to establish an alternative economy based on holy relics in the wake of global financial apocalypse? Anything is possible. It is hard to keep up with all the demented activities of this pope, isn't it? Has he invaded Switzerland yet? I am seriously pushing BMF to apply for the job; he's currently looking and would be much better at it. The wardrobe is excellent and he already has the Prada Sport shoes.

Then he told me that Eric Gill shagged his dogs. We both looked at Oscar speculatively and hoped Eric Gill's dogs were larger. Do not think he has potential for a career as a dog whore.

Prog Rock's camera is also full of the weirdest pictures imaginable. Like, my shoe cupboard. 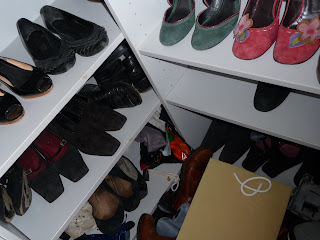 You can't even see most of the good shoes! Look at all those square toes. I mean, I know McQueen was doing it last season, but those ones are carrément last time around squared off toes. And bottom left? New Look. Brrr.

Or a Pokémon wearing an Amy Winehouse badge. Out of focus. 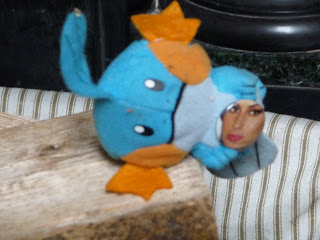 Or a giddyingly cluttered view down the staircase to the spawn floor. 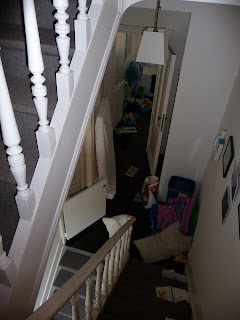 I woke up this morning (too early, to the usual accompaniment of "OSCAR! Shackass! Putain de chien!) no longer feeling funny. As I typed this, Prog Rock made a plastic grasshopper jump up to the ceiling for his own amusement and now he's watching Fingers and the dog chase each other round in circles in the back yard, and he looks so happy. They all do. It's lovely. He has counted up all Lashes' pokémons (315). He has made me 569 cups of tea in the last two days. He has killed lots of moths. He brought me self-raising flour. He is watching Fanny and Alexander with chinese subtitles because he doesn't know how to change them. I love him and I really really want him to be happy. The end.


This one is on probation

E (gravely): Fingers, you know we really love you and we love doing nice things with you. But when you have a grosse colère like this morning in the black light mini golf, we really don't like it.

F: I don't have grosses coléres at school.

E: Well, I am very glad to hear that. You would get into terrible trouble if you did. Straight to the Directeur's office!

F: I don't have grosses colères because Madame Marie-Pierre is much nicer than you.

This one needs teeth 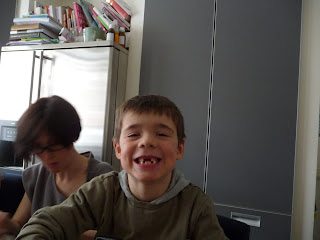 He looks like the village simpleton in some distant century before dentistry became commonplace. But then we go quite well together, since I am apparently catching moths with my mouth. I am revealing more and more of myself, aren't I? It's like some terribly unerotic peep show. I was never that concerned about anonymity. It's always been more about trying to delay the moment when you see how dull and unglamorous I really am. Which is good because someone from the Corridor of Ennui found me on Twitter. Hi Rachel!


This one is also on probation after chewing Marc Jacobs peep toes. Bastard. 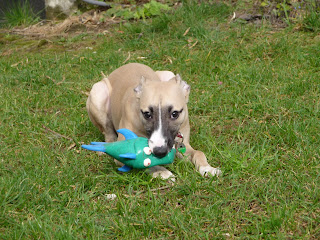 Banished to garden. Soon to be dressed up as a dinosaur for my dare. Which will teach him. Otherwise, I'm sending him out on the streets to sell his silky ass.

Ah yes, next question. When can Herman go outside? He likes running around the living room.

You have a shoe cupboard...sigh. I spend most of my time rescuing my nice ones from under muddy boy shoes/trainers that the husband tidies away - on top of the GOOD shoes. How nice it would be to have a separate space just for mine.

Aah, the gappy phase! I found it wierd when the next teeth come through because they are too big for the child at that point. They look enormous and the children have to grow before they look as if the teeth belong to them.

how did it come about that you know whats on ProgRock (and who is he? ill have to pay more attention) camera. Did you violate his camera? go scrolling thru the photos? ive always wondered about the atiquette for this, doing the same on my boyfriends almost grownup son's camera. i am often both apprehensive and excited about what i may find. isnt it like going thru a diary? I did that (only once) and actually no, twice, and both times found nothing about me which was even WORSE than something..

did i say attiquette? oops

My wv was hoari - quite apt, if one considers my shoes. Prog Rock is definitely not weird. He is capturing life as it is chez toi, which probably keeps him going til the next visit. I do the same when I go 'home' - it hasn't been home for over 20 years but the little things make me smile. I heart your shoe cupboard, which makes you very glam in my eyes. The little one must have made a mint when the tooth fairy came! Still dying over my last comment, I really don't divulge and am very shy and suddenly remembered on Saturday morning. I blame the wine.

Zed - on sunny days you can bung him outside for a couple of hours. But not all day yet. I'll tell you when.

Hat - oh, it is nice. It's an absolute treat. But it's so far away up top of the house that I never put any shoes away there.

Screamish - Prog Rock is my stepfather (mum's husband). He lent me his memory card thingy so I could copy his photos, so no etiquette questions arose really. Also, they were mainly unidentifiable buildings, or our house.. No scandal. As you say, disappointing. Red wine better than crumbs, I find.

Sue - your confession cheered me up SO MUCH. I was so glad of it. He has always taken peculiar photos. There are lots of newborn Fingers, but only of his fiendishly long toes. Not the rest of him.

Ah yes the weepette scowl. The one that says, (slightly ashamedly) And? You gotta problem with that? LLGxx

Isn't it nice that Fingers has the where with all to blame you for his misdemeanors? That is love

I am jealous of your shoes.

Tortoise in back left corner half buried in pile of straw stuff.

ng seen the Heston Blumenthal Victorian feast, I now get the 'Moths on toast' thing)

Happy for ProgRock. But I was kinda in love with him.
Shackass!

Does your weepette run round madly in ever decreasing circles? Our Grandma's does. I always wonder why she doesn't fall over afterwards through dizziness like the children do when they try the same stunt - that's the whippet I mean, not Grandma.

Oscar's expressions crack me up. I don't think I could be in the same room with him without behaving like a love sick goof. I'd maul him and slobber all over him.

And how wrong is it that I was ecstatic to find the tortoise?

I think I need more medication.

- I had a similar toothless gap for over a year.

- my hallway is cluttered with recycling and deceased appliances that I forlornly hope will spring back to life. Oh, and bags of (unused) cat litter.

- how wonderful to have a shoe cupboard. Mine spill out from the wardrobe floor while the hanging shoe racks are nearly empty.

Thank you for that picture of Lashes and yourself, and the commentary that came with it. It totally made my day.

Ali - ooh, that shows me there are actually TWO visible (since the one I could see is far right). Gold star!

FC - really? Do expand. Would it be a savoury, à la gentleman's relish?

Jools - ah, who knows. He may still be yours. At least you know he's looking!

Wife in HK - yes, it does. On a weird diagonal angle. I know exactly what you mean.

Lisa - I like that you were happy with spot the tortoise. Maybe it will be the new Sudoku?

Mickle - the cupboard is half empty. The shoes are all over the house. I am a thankless ungrateful individual, aren't I?

What are they when they stop being your step-father and you still love them? It's a weird one. Much like the photoes. That's me over-dosed on weird for the week! t.x (I'm looking forward to the gappy phase - the 'wiggle it til it bleeds' phase is making me feel so sick!)

What is it about your world that makes me laugh like a drain and my heart ache at the same time?

What is the Belgian equivalent of 'keep to the roads, stay off the moors'?

Madame Waffle, I could not see either of the tortoises, I was only hoping that one wasn't inside the fishy toy Weepette was mauling...

I am sorry but I love it that Prog Rock dad allows Osc on your bed - and I love his quirky, eclectic photos - Better than all those we usually see in life, of old matrons in cardigans in front of La Tour Eiffel.

You have to harden your heart against little ones telling you they prefer 1. their teachers, 2. their father, 3. the cat... to their mother! But the 'Jaws' shot was fantabulous!

KP - oh god, keep away, I fear we have barely scratched the surface of this week's weird, dearest one.

Cassandra - are you implying my son is a werewolf? That might explain the weepette eating perhaps.

Woman - oh, I rather welcome Fingers' stance. I like Mme Marie Pierre better than me too. I wish she'd come and take over.

I was thinking more of the village idiot thing - isn't that the advice they give? I dunno, could be getting my references mixed. Think that I might give in, admit defeat and join Twitter today - what do you think?

Prog Rock Step Dad sounds wonderful. Glad you're feeling less conflicted. Lucky you to have him.
And my daughter is currently sporting the jack 'o lantern look as well, with four missing teeth. And one is growing back in the entirely wrong place, behind another tooth, like a shark's double rows. I fear there is expensive dental work in our future.

Heston Blumenthal, author of all things bizarre in the kitchen, has a series on Channel 4 at the moment, recreating feasts from different periods in history. Last week it was the Victorian era and he referred to a tract published at the time by one Vincent M. Holt entitled 'Why Not Eat Insects?' in which the writer proposed all manner of nourishing insect-based recipes to alleviate hunger among the poor of the land. Among them was 'Moths On Toast'.

In the end Heston satisfied himself with deep fried mealworms, injected with a tomato paste, so they oozed realistically when bitten into.

The high-spot, however, was the metre-high, green, phosphorescent, absinthe-flavoured jelly cone which was made to wobble by sticking vibrators in the base.